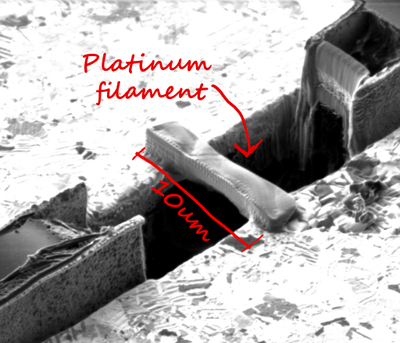 The Adventures of a Fat Space Bunny

Right now, I’m two stories underground and I’m clothed in a white puffy suit that makes me look like some sort of fat space bunny. A really fat space bunny. It’s cold in the room, and the suit’s not helping. I’m sitting in a captain’s chair at the console for a giant machine that reminds me a lot of the Death Star. Don’t worry though: I’m not dreaming, nor have I been abducted by aliens. I’m just in lab. Hi, my name is Tom Gwinn. I’m a junior at Caltech majoring in Electrical Engineering, and I’m going to be writing this blog for at least the next couple of weeks.

I was born and raised in a small suburb of Orlando, Florida. I claim (to the extreme skepticism of others) that this has somehow given me a good understanding of Southern culture, but I think really it just means I like to eat barbecue a lot. Oh, while we’re still on the topic of where I’m from, I just want to say that there ARE places in Florida that aren’t filled with old people. Maybe only a few places, but still. Did I mention that I like barbecue? I also really like sushi, especially sashimi and chirashi (basically raw fish and raw fish on rice). Right now you might be thinking that my tastes are pretty eclectic, but that’s not really true. I just like to eat! I’m always trying new places around Pasadena, although I do have a few old favorites I try to visit often. Right now I’m craving some Kang Kang; Kang Kang is a Chinese place in nearby Alhambra that serves a good dinner for around $4. That’s right, $4! It’s pretty good, too. Mmm… I can already taste the pan-fried bao.

OK, I’ve got to change topics now. If I keep it up any longer I’ll have to stop writing to go eat. Last week was a really big week for me. I managed to go to my house’s hot tub at least five times, I taught my first lab section of APh9 for the year, I learned how to politely request someone’s surname in Mandarin Chinese, I finally found a Pandora station I really like… and oh, yeah, I had to give a presentation that acted as the culmination of an entire summer’s worth of research. Guess which one of these was the most stressful! In fairness, you might not know of half the things I’m talking about, so I’ll just tell you that it was the presentation. I spent this summer working at Caltech through a program called the Summer Undergraduate Research Fellowship or SURF for short. Basically, you do ten weeks of research with a Caltech professor, you write a paper and give a presentation, and you get a pretty nifty six grand stipend. It’s a really great deal, so a lot of students at Caltech do SURFs. In fact,

This was my second SURF with Dr. Axel Scherer, the head of Caltech’s Nanofabrication group. My project was really cool—I made some really tiny (10% of your average human hair’s width) incandescent light emitters to be used in on-chip infrared spectroscopy. You can see one of the ones I made to the right. I started from the ground up—I designed the device in theory, then worked on fabrication methods, and finally attempted to make a device. Then I attempted to make some more devices. Then I tried again. Research is like that sometimes.

I still remember my first working device vividly though—it was 1am in the subbasement of Moore, an Electrical Engineering building here on campus. I had been tweaking my test setup all night to attempt to see something… anything. One last tweak, I thought, before I go to bed. I half-heartedly turned up the current on the filament, only to see it glow brightly. I started yelling (there may have been some mild profanity) and ran around the lab. That was a bad idea, I hit my shin—but it was totally worth it.

I guess what I’m trying to say is that my summer experience was one I’ll never forget.

Oh—and the presentation? It went fine.