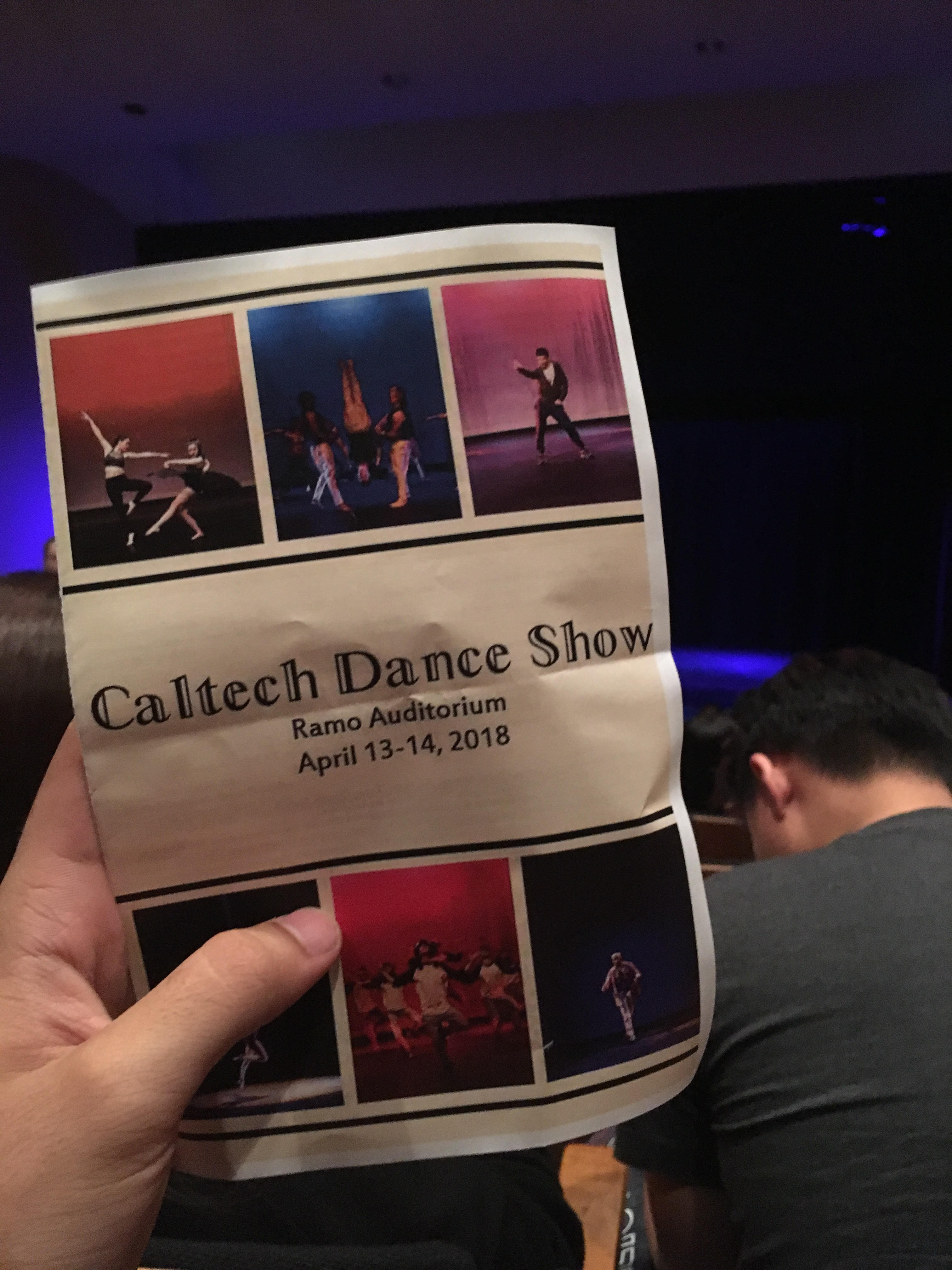 About a week ago I started seeing posters for the Caltech dance show. It seemed like a fun time and honestly I could’ve sworn I remembered seeing something on there about snacks at intermission (spoiler alert: there weren’t any snacks) so this past Friday night at 7:30pm I found myself sitting in the back of Ramo auditorium watching, well, a dance show.

Now a bit of a backstory: I had a friend in high school who had always peer-pressured me into attending her dance recitals, so I came in expecting something similar. I honestly expected a combo of modern interpretive dance, hip hop dance, and one country line dance to Luke Bryan’s Country Girl (shake it for me). Also, I didn’t read the program because some things in life are better left as a surprise. So imagine my shock when the dancing is a beautiful menagerie of Indian classical dance, Chinese inspired dance, west coast swing, hip hop, ballet, and more! I saw some amazing types of dance that I would’ve otherwise never been exposed to, and in a way I think that reflects the great diversity in backgrounds of Caltech students.

The second thing that impressed me was the passion shown by every dancer. You could see the hours put in to painstakingly nail every timing, and the huge smiles on everyone’s face as they danced their hearts out. This passion echoed in the crowd too; the entire performance was super energetic. The audience was clapping along to the beat, hooting, and cheering through every act.

However, the coolest thing for me about the dance show was the fact that I knew about half the people in it. The show kicked off with one of my best friends, Eric, jamming out to Khalid. My friend Maggie did a flag choreography to Chandelier. Fleming House waiter Danh had the sickest removal of a shirt to reveal… another identical shirt. And my Bi1x (intro bio lab) TA, a super cool but kind of nerdy seeming guy with Harry Potter-esque glasses stands up and hits some of the sickest moves of the entire dance show. I’m pretty sure one of my other Bi1x TAs did a front-flip but I couldn’t see from where I was. Bi1x is a pretty awesome class, would definitely recommend. Anyways it was just super cool to know so many people dancing their hearts out for the love of the art form.

I’ll definitely be attending the next dance show.