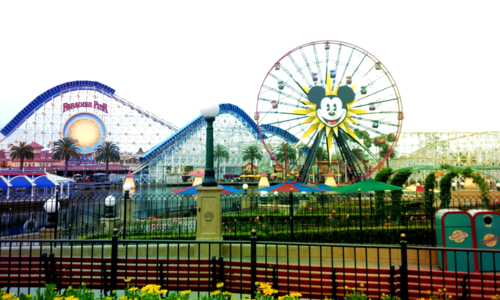 The Happiest Place on Earth! Part 1

One of the most awesome things as a SURF student at Caltech is that the Student-Faculty Programs Office arranges and hosts activities for us! These events are usually geared to help people chill out from work and socialize.

This year, they setup a trip to go to Disneyland for half off and transportation provided. I hadn’t gone to Disneyland in recent memory, so I was definitely very excited. I love rollercoasters! My friends and I decided to go to the Disneyland California Adventures Park rather than the iconic Disneyland Park because it has more rides. We went on all the rides (except the ones clearly only for kiddies), but I’m only going to talk about a few.

One of the many rides we went to was the Toy Story based Midway Mania Ride.

It’s not a rollercoaster, but more like a 3D arcade shooter with a running score throughout the ride. In the ride, you “fire” digitalized plates using the canon in front of you (green and yellow in the picture above) at the targets in each mini-game screen. I have the aim of a blind dog, so I missed most of the targets.

I feel that the ride was very well put together with the guests in mind. For example, we were kept entertained by HUGE Mr. Potato Head figure while waiting in line.

Mr. Potato Head was really cool! He could pick out features of people in front of his exhibit (ie white top, red hat, etc), ask questions, and gesture appropriately with his arms. At the end of performing a song, he even made a funny comment, something along the lines of, “Wow! A standing ovation!” The most unexpectedly fun ride was the Cars basedRadiator Springs Racers ride.

I personally didn’t find Cars that great of a movie, but I figured going on the ride was a part of the complete Disneyland experience. I didn’t expect much - just figures moving and “speaking” with some preset audio. And while initially that’s what happened, our Car ride (pun fully intended) turned into a fast and wild race. I wasn’t able to capture a good picture with the feeble camera on my phone, so I grabbed a picture from flickr for your viewing pleasure.

My friends and I were super surprised by the fact that there was a live performance. We stumbled across them while looking for other rides to go on. Later, we found out that there are multple people who play each role (ie Alice, Mad Hatter, etc). The particular group that we listened to were awesome - Alice had a gorgeous voice and Hatter really knew how to work the crowd.

This post only describes a snippet of my experience at Disneyland during the day. For Part 2, I will go into detail about the activities we did during the evening.