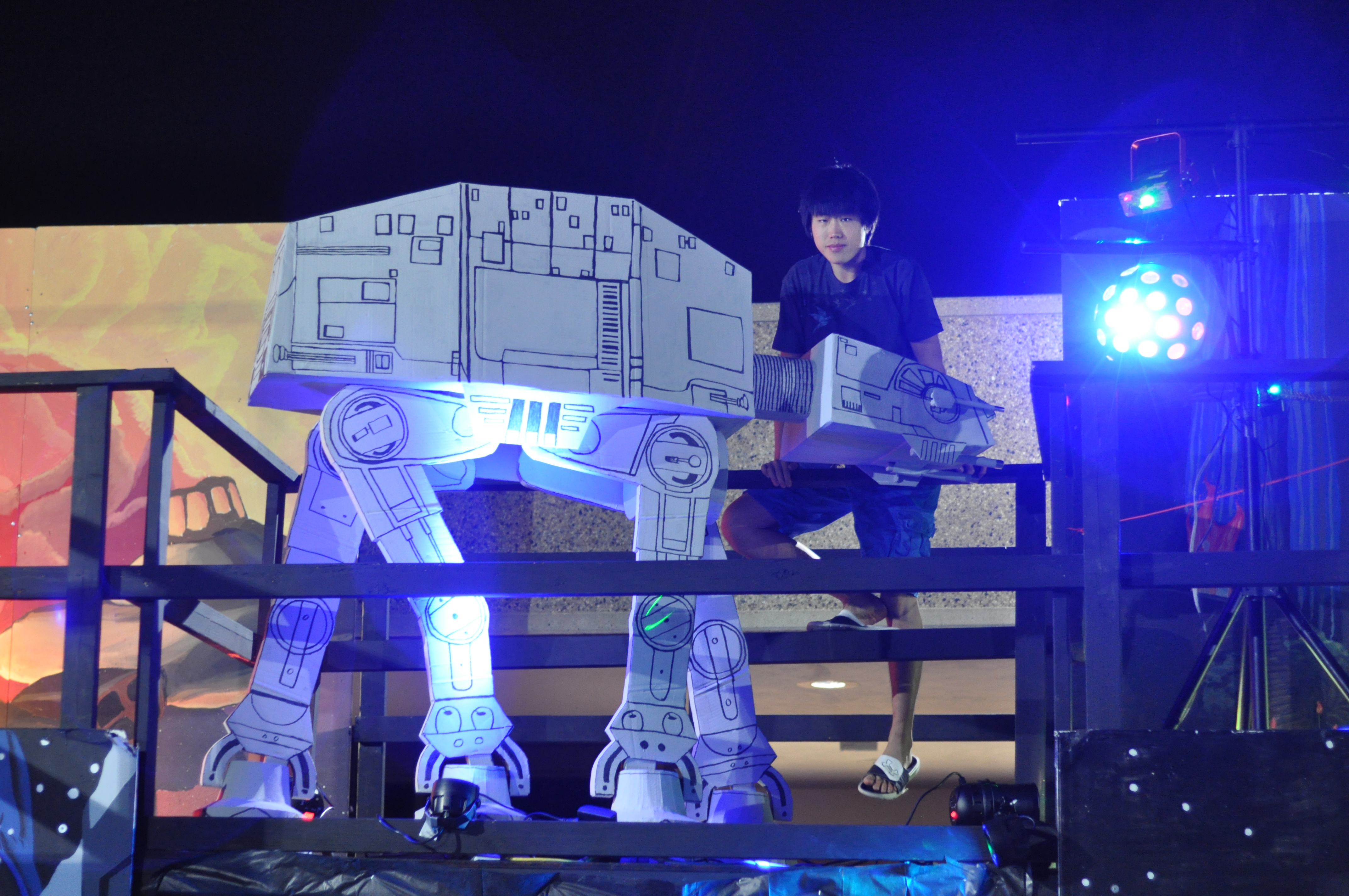 The third installment of Venerable OPI continues. In this post, I will be sharing with you memories of OPI from my junior year, where the theme was Star Wars and everything was truly out of this world.

In addition to the dance platform, we had a lot of side construction projects. My friends Jerry and Sandra made a 10-foot AT-AT with light-up eyes, which stood on the overpass between Endor and Bespin. Here is Jerry half-smiling by his finished project on the big night.

Teo and Renee built a nearly to scale sunken X-wing in the courtyard. The actual X-wing is 36 square feet; this one is 34. The cockpit contains a chair big enough for a person to sit in.

Here are a couple of Gene’s space battle murals on the ground floor:

And his painting of the Sarlaac trying to chew on the Millennium Falcon:

My own two murals of the Forest Moon of Endor, during the day with the giant Death Star hanging in the air…

And at night with the Ewoks and their treehouses and Leia, Luke, Han, and Chewbacca on the bridge, along with C-3PO and R2-D2 in the corner watching the fire.

Inside, we decorated our dining hall to look like the Cantina in “A New Hope.” Lasya and Lily spear-headed the work on these tape mannequins with balloon papier-mache heads for the band that plays in the Cantina.

Here is our RA Viki dressed like R2-D2 to also match the old piano we painted in his likeness.

And every year, we add additional murals outside denoting the name of the party and the theme–hahaha, very punny, a new H(OPI)–as well as a themed twist on the Venerable House Crest. The 2016 crest was done by Lily, who turned it into a glorious symbolic struggle between order and freedom.

In this zoom-out image of the entire party, behold the 20-foot AT-ST constructed by Jimmy and Abhi that is the DJ stand. I think the DJ was suitably impressed, though at first we had a couple of security guards come over to make sure we had clearance for letting someone get into that thing. You can also see the giant beach-ball Death Star blown and painted by Lasya hanging from the ceiling.

Finally, a picture of all 6 of the party team leaders for OPI 2016! Starting from the left, the 3 art leaders William, myself, and Lasya, and the 3 construction leaders Joe, Patrick, andJerry.