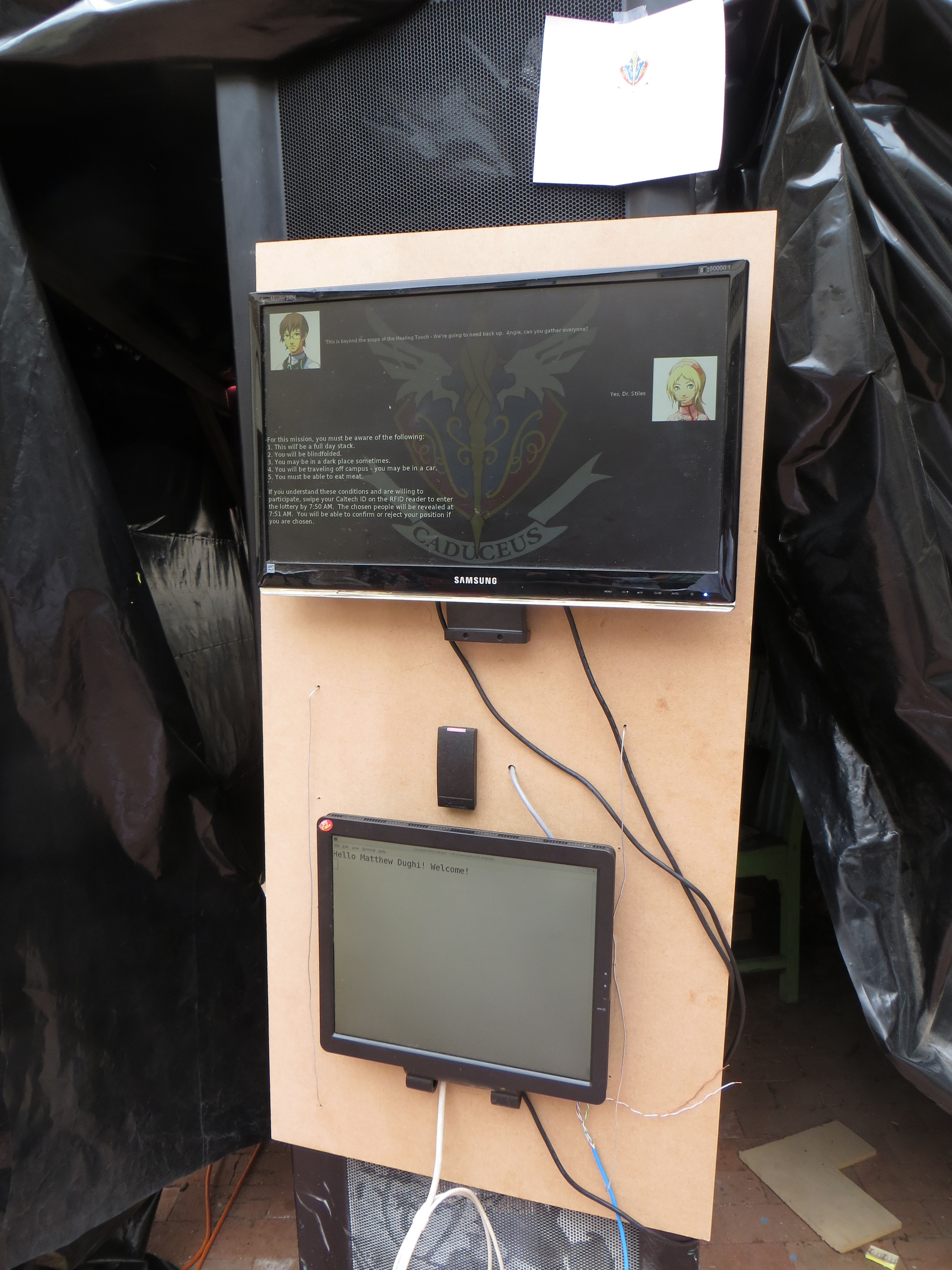 Fri May 24th -Ditch Day!Wake up to the thunderous sound of percussion fire. Dive out of bed into nearby closet. Grab earplugs, and race out out your room to face an army of armed Seniors whow will use whatever means possible to get you out of bed. Including assaulting your rooms with concentrated dosages of high oscillation aerial destruction. (banging pots and pans) Race to the courtyard of your student house to find a mysterious bulletin, where it previously wasn’t. On it, themed signup sheets where you fill your name on the one you’d most like to participate in. Signup to more than one stack and you get kicked by discipline. (removed from one of them) Wait until the time marked on the sheet before beginning your ditch day stack, a day of puzzles, no classes, adventure, and fun! Basically, the Senior class forms teams that throughout the year plan and create a stack, which is a set of puzzles, and or, experiences, to occupy your ditch day with fun/entertaining happy-stuffs. Seriously, this would be the worst day to sleep in. This year, at Dabney’s Ditch day, in addition to the mysterious bulletin, a large black object, the size of a car, was set up.

Divergence font Countdown to end of lottery.And I got in! Otherwise, I’d probably be talking about a different stack :P

And not so much…

Well, the mystery drivers soon left and we were allowed to remove our blindfolds, to start breakfast while solving the first clue. In the room we were left in was a black suitcase, laptop, and puzzle.

Feel free to solve it again. The two codes corresponded to numbers needed to unlock the suitcase, which was probably the most important item that day.

6 Nameplates! On each nameplate, was a character. The characters were, Rika, Sakura, Kurohime, Menma, Fate, Miku, Asuna, Madoka, Nanoha and someone I didn’t recognize…

I’m guessing each of our names had been inputted into a nameplate during the driving distraction. Each nameplate also had an unlock code, which opened more functionalities of these nameplates. The unlock codes had been written on our hands in ink invisible ink.

Back of nameplate. These can apparently be programmed with even more functions! Perhaps over some more relaxed weekend, I’ll figure out how.The clues in the suitcase, then led us to the Little Tokyo bookstore. We were given a code that turned out to be the ISBN to the book Murakami’s “Dance Dance Dance” that we needed to align to a transparency to get the next clue.

By the way, that’s not my hand or my nameplate. These are pictures from another person. I don’t have a camera :P Here’s Vy-Luan advertising Skal. Also, check out the Trauma Team T-shirts! Every stack has themed T-shirts. From what I heard, they are historically meant as an offering to the stackees so that we don’t break into the Seniors rooms while they’re ditching. From my 2 ditch-day experiences though, that doesn’t seem to be the reason anymore, rather it’s just tradition to give out T-shirts.

At some point, the cellphone that came in the suitcase gained more functionality.

If you wanted to figure out the answer to the puzzle in the nameplate picture above, don’t read on. Othwerse, the answer’s in the picture below.

2 Hours to figure out the password and save Dr. Kimishima’s life! It turns out there were UV ink letters written on certain postits and they lined up to make the password.

Success! The password was “There is no way to know the future. But still. Look forward to living your life.”

(Soul Gems referring to the nameplates) After the stack, we hung around Raymond and Jomya’s place. Check out his merc!

Group picture with all the people! Including the Seniors that actually made the stack. Thanks Raymond and Jomya! (bottom two people)