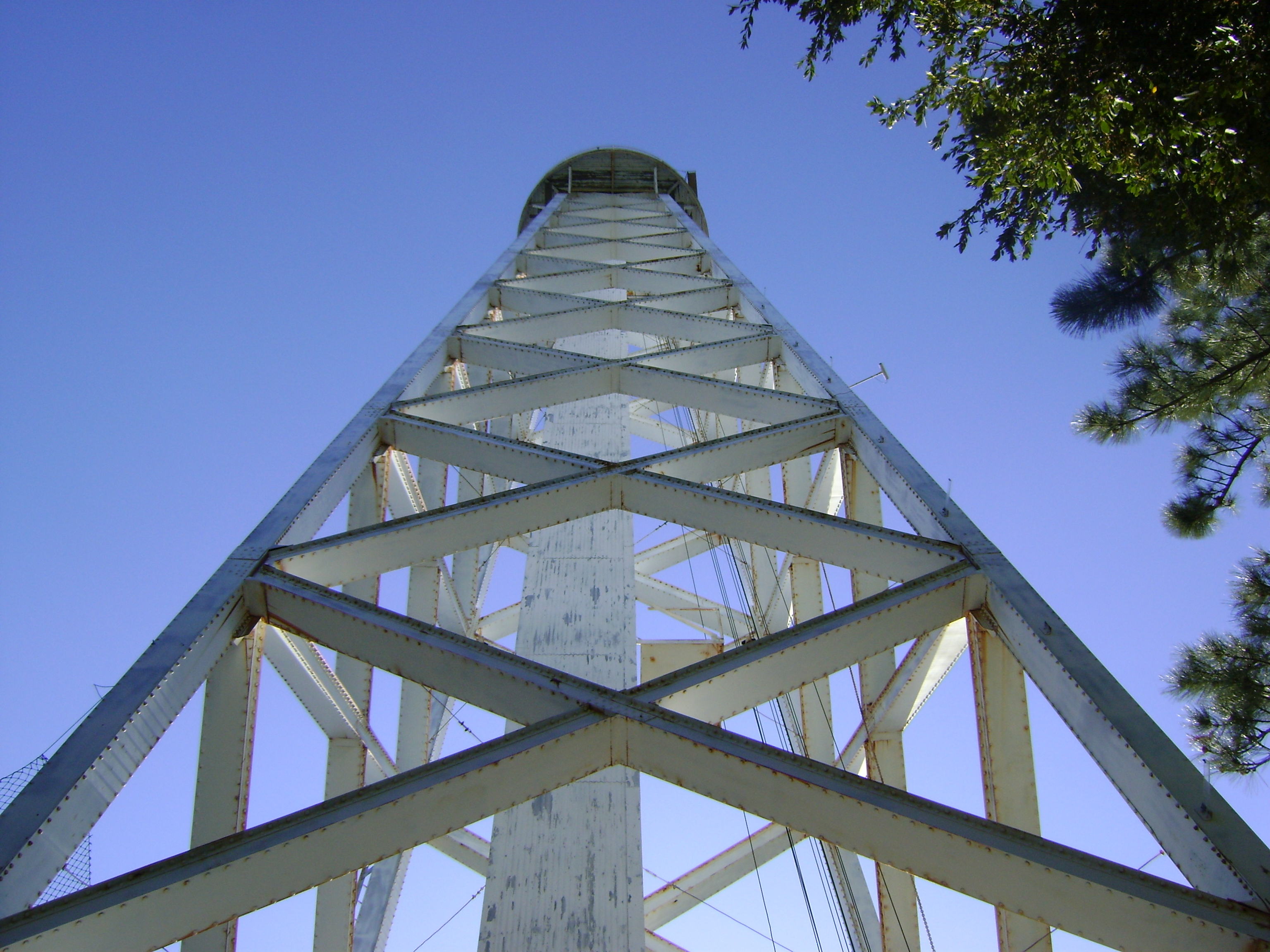 Monday evening was time for a field trip! Varoujan Gorjian and Tim Thompson, who hang out at the summer astronomy student coffee breaks (and do their parts to make them happen at all!), led an excursion up to Mt. Wilson. A few cars of people drove up, and then Tim was kind enough to lead us around. He’s trained as a tour guide up there, and he has keys to a bunch of the telescopes, so we got to see lots of stuff.

We started out by looking at the 150 ft and the 60 ft solar telescopes. The 150 ft telescope operator was off at dinner when we first got there, so Tim went over some of the historical importance of these telescopes. Initially, Mt. Wilson was a solar observatory, and between the two telescopes there are the discovery of the solar magnetic field, and the oscillations of the sun, among other things. But they’re still in use, as we got to see when the operator got off dinner. He took us inside and showed how a scan was in progress, and explained that while there is no real sunspot activity right now, they still make observations (i.e., drawings) of sunspots by hand when they are seen.

Then we went over to look at the 60 inch mirror telescope. We got to wander around the telescope itself, look at (but don’t touch!) the controls, and finally go down to the base, where the gears to turn the telescope are. They put everything together with rivets back in the day… and the wrench to turn the ones down there is huge, but apparently tiny next to the 100 inch telescope base rivets. (We couldn’t see the base of the 100 inch telescope since that’s buried underground.)

** Then we briefly wandered off to the south. We got to see some views down into the LA basin, but it was a bit smoggy, so we couldn’t see to far. Apparently on good days you can see Catalina Island… But we did get to see this plaque on a concrete platform. Not some random one, but one with historical importance: this was the platform off of which Michelson performed his speed of light measurements between Mt. Wilson and Lookout Mountain.

On our way back through the main area, we stopped and looked at one of the Chara interferometry telescopes.

Then we went on to the 100 inch telescope, which actually has a name: Hooker Telescope. Part of the bottom of the telescope was open enough that you can shine a light in and see the base of the piece of glass that was turned into the mirror. It’s a green that’s reminiscent of wine bottles, and for good reason: French wine bottle makers were best equipped to pour large amounts of glass, so that’s who made the piece of glass for the project.

We went up another level to look at the controls for the telescope, and Tim gave us a demonstration of how the dome surrounding the telescope moves equatorially, and it was really impressive. It was really hard to tell which part was moving from the inside. The mechanism to move the dome was so smooth that there was no “bumpiness” in the turning. He opened up the door to the catwalk around the outside of the dome, and finally we had an outside frame of reference to appreciate that yes, the dome is moving, no matter what your eyes try to trick you into thinking inside. He was going to just move it a bit to demonstrate, but when he went to move it back the other way, the controls weren’t working in that direction. So he had to turn the dome all 360 degrees in the one direction – and we got to go on a merry go round ride! I walked around the catwalk once, went inside to peer at the telescope versus the moving floor, and back out to just watch some of the sunset while we were turning it back to its starting position. I have to say, that was really fun.

Then it was time for us to be heading back. So we piled back into the cars. Let me just say this of the drive to and from Mt. Wilson: it’s windy. Very windy, with narrow shoulders and very low speed limits. I thought it was cool, and a very scenic drive, but I can appreciate how some people can get car sick from that trip.

So Tim dropped a car full of us back at Caltech, and the day was done! My first trip up Mt. Wilson was a success.