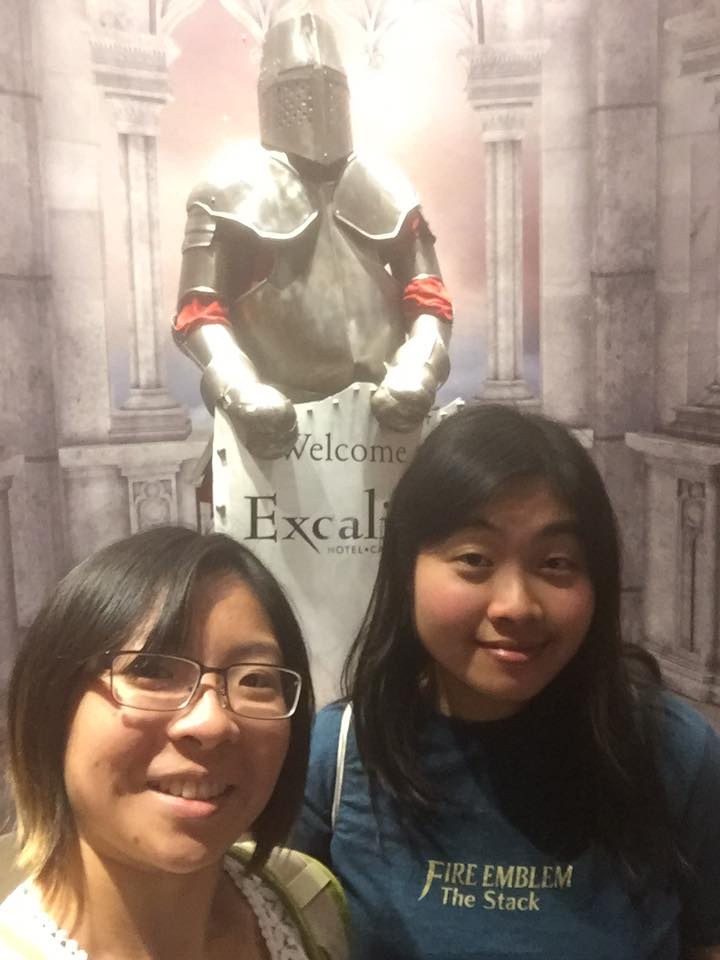 Every year, the seniors take an organized school trip somewhere for a night after senior finals week, which in 3rd term is a week earlier than everyone else’s finals. Last year they went to Catalina. This year we went to Vegas.

I’ve probably been to Vegas at least 7 times between the ages of 8 and 17 with my family. It’s not as exciting as it sounds–we just stay in a nice hotel, stuff our faces at the buffets, and walk around looking at the decor inside the other hotels. It’s a nice change of scenery from our San Diego home. If we go in the winter, we’ll also hit up Death Valley. But this was the first time I was going to Vegas after turning 21, and with friends rather than family, so it was going to be a more authentic “young people” experience than I would have gotten otherwise.

We were staying in the hotel Excalibur, which is loosely King Arthur-themed. I was happy to be rooming with my best friend Jagriti, who had been my roommate freshman year but never since. While waiting for check-in, some of us wandered the area near the lobby. On the way to the bathroom, my friend Lily and I found this cool alcove:

After everyone was settled, we had a couple of hours before dinner. A group of Rudds (members of Venerable House) went hotel-hopping. Luxor is an Egypt-themed, pyramid-shaped hotel. We heard that there were incline elevators to get to the top rooms of the pyramid, but to our disappointment, we weren’t allowed to ride them if we weren’t staying at the hotel. We did see a really cool steampunk-themed cafe or bar called the Boiler Room, though:

The weather was actually beautiful outside. The times I’ve been to Vegas in the summer, it’s never failed to be in the 110s. But for some reason it was only 90 outside today. Sunglasses were still necessary, but we could walk around and not die. Here’s Jagriti and me in front of Mandalay Bay in our shades:

The dinner show that the school treated us to was the Tournament of Kings at Excalibur. We were served tomato soup; a dinner course of a whole roast chicken, a potato, a cheese biscuit, and some broccoli; and an apple strudel, all of which we had to eat without hands. Meanwhile, we watched Arthur and the knights of the Round Table joust and spar for glory until they were interrupted by Mordred’s evil Dragon Knight and actually had to fight for their lives. Here are Mordred’s Dragon minions throwing fire at the other kings:

My friend Alex, doing some poking around as we were being served dinner at Tournament of Kings, found reasonably-priced Cirque du Soleil: Ka tickets for a show that night. So we ended up seeing 2 shows in a day.

For me, Cirque made the entire trip. The acrobatics were amazing. I had seen the Ringling Brothers once before, and that was all the circus I had ever been to. Though I disliked the animal cruelty and swore I’d never go to one again, it was a good circus experience–but Cirque du Soleil took it a step further and became an art. The costumes, the music, the storyline all went with the acrobatics and was, in a word, a spectacle. Now I can finally understand the appeal of Vegas shows and Broadway shows, and how they succeed in bringing art to life right in front of your eyes and ears. I’m addicted now…

Photography was forbidden, but we did get a picture of the sign in front as a memento.

We went to see the Bellagio fountains afterward, then went to the Cosmopolitan to check out their huge chandelier. Pictures cannot capture how it was–you simply have to be there, sitting at a table in one of the 3 levels of the chandelier.

The next day, we had brunch at Le Village Buffet in Paris and continued hotel-hopping at the Venetian and the Mirage. At 4 p.m., it was time to head back to Pasadena.

My view of Vegas as a child was that it was full of sketchy people who came to gamble and see inappropriate shows, and that it was a city of excess and waste. My view of Vegas now has a different layer. It’s not as one-sidedly tacky as I used to think it was. Adjacent to all the vice in the city, there are some truly amazing forms of art and culture, and places for everyone of all tastes to enjoy themselves and seek new sensations to enrich their lives.

Thanks to everyone who’s been following “Four Years and Four Seasons.” I hope you had as much reading it as I had writing it. As I get to my customary sign-off, it is with a heavy heart and the knowledge that in one more post, this blog will have to end and there will be no more next time. I will be graduating in a few days and moving on from Caltech. But for now, happy memories only!