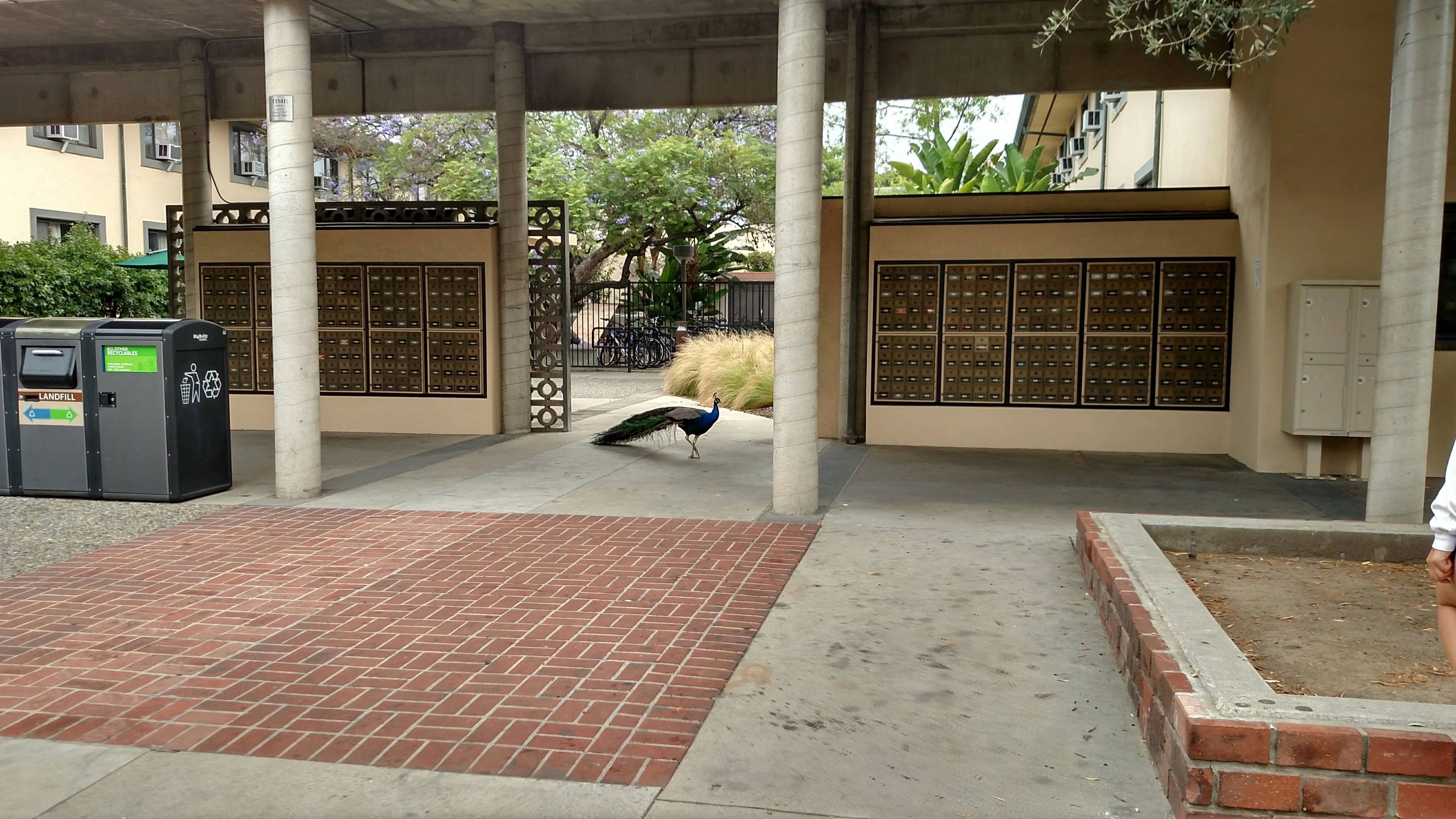 Hi there! I did nothing for two days this weekend. By which I mean, I did no work.

On Friday morning, we had a fake stack! The premise was just to catch all the seniors in your house and tape them to trees. I successfully tackled two seniors but we ran out of tape so I had to just pin one down until the stack was over. It was fun! Lots of underclassmen came out to tackle seniors and the seniors tried to untape each other. The premise of this fake stack originates in the Ditch Day tradition of taping non-ditching seniorsto trees. Theoretically they’re not supposed to be on campus, but how much the underclassmen care varies from house to house.

Peacocks showed up to investigate the sounds. You can’t see it in the picture but there’s tons of people. Peacocks have been showing up on campus every few days this month - I don’t really know where they come from.

I got breakfast and went to the gym. Bacon sandwiches are a non-ideal pre-workout meal. Just FYI.

I skipped my Friday morning class to treat myself to a nice relaxing snack. I just wasn’t feeling it that day plus all the notes are online. That’s the only class I’ve skipped all term, though. That afternoon I made a monster batch of cookies and did laundry. That night was an extra-long happy hour because the bartender didn’t show up for Cocktail Party. Lots of alums showed up because it was alumni weekend, so they were visiting anyway. Around 11 we headed over to the Chester’s for their “Interhouse,” which wasn’t really an Interhouse but they had a campus-registered party so it was cool. They had a Domino’s delivery at 1am which was very much appreciated. Plus I live near the Chester’s so it was a nice short walk home.

I made pancakes on Saturday morning and continued doing laundry. I went to my friend’s birthday party - we went out to Shanghainese food.

It was really tasty and we had a great time. (All the matching t-shirts are from the Caltech 5k, which was that morning.) I tried those dumplings with the soup inside and lots of other new things! Lidan is 22 now! After lunch, I did more laundry and probably some work. I don’t remember doing work but I feel like that must have happened. Maybe I just wasted a few hours. Either way Alumni dinner came around at 6, which was really good! They like to feed the alums delicious food. I talked to some Pageboys who were back for their 50-year gradiversary (reunion?) and learned what our house was like when it was first founded. Apparently they used to terrible food. In any case, Saturday’s dinner was amazing. There was an appetizer (mini pesto caprese with burrata on tiny flaky pastry circles), main (prime rib, salmon, or stuffed pasta with mashed potatoes and green beans) and dessert (cake!). Lots of more recent alums hung around after dinner and we had a fun Saturday night catching up with our graduated friends.

I actually had to do work on Sunday. I powered through a set, all my grading, a TA meeting, and dinner with my boyfriend who was golfing in Palm Beach all weekend.

Here’s hoping that all that fun will carry me through a packed and work-intensive week. We’re starting in on the home stretch. This is the seniors’ last week of classes.