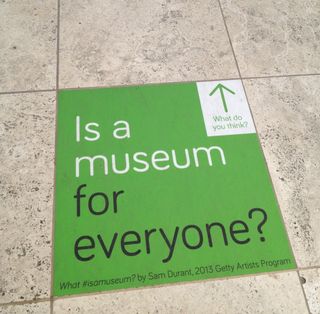 Visit from my family! Part 1

It’s not if you ask my younger brother. Haha. Last weekend, my parents and little brother dropped by to visit me. Isn’t that sweet? :) While they were here, we explored the Getty Center in west LA. If you haven’t gone before or for a while, you should definitely check it out! I really love the overall layout of the museum. It was designed to reflect and complement the surrounding hills, which makes it feel good to be walking around in this academic sort of environment. It also means that there are stunning views no matter where you look.

We went on two tours. The first tour was to learn more about the architecture and history of the museum. I found it amazing that all of the stone tiles were mined and shipped from Italy! Mr. Getty must have been a huge fan of Roman work as well because there are several functional aqueducts scattered throughout the campus.

The second tour showed us the highlights of the collection of artworks on display.

I really enjoyed this tour because our guide asked us questions to help us interact with the artwork. Our guide also told us cool background history about the artworks, such as who was friends with whom and how different schools of style interacted with each other. She would point out little details that I initiallywould not havenoticed or appreciated fully.

My favorite work from the highlights tour was this French chandelier.

It was created byGérard-Jean Galle and inspired by hot air balloons, which had just become popular at the time. The chandelier was designed to incorporate each one of the classical elements. Fire was represented by the candles, while earth was symbolized with the globe. Air was represented by the stars on the globe and the Western zodiac symbols decorating the band going around the globe.

Water was the coolest because apparently the bottom glass bowl was made to hold water and LIVE GOLDFISH! I really wish that the chandelier was displayed with the goldfish swimming around.

Originally, we planned on staying the whole day. But since I injured my hip the day before, we had to leave early in the afternoon. We missed out on exploring the gardens at the center. Hopefully next time, we will have time to check them out!