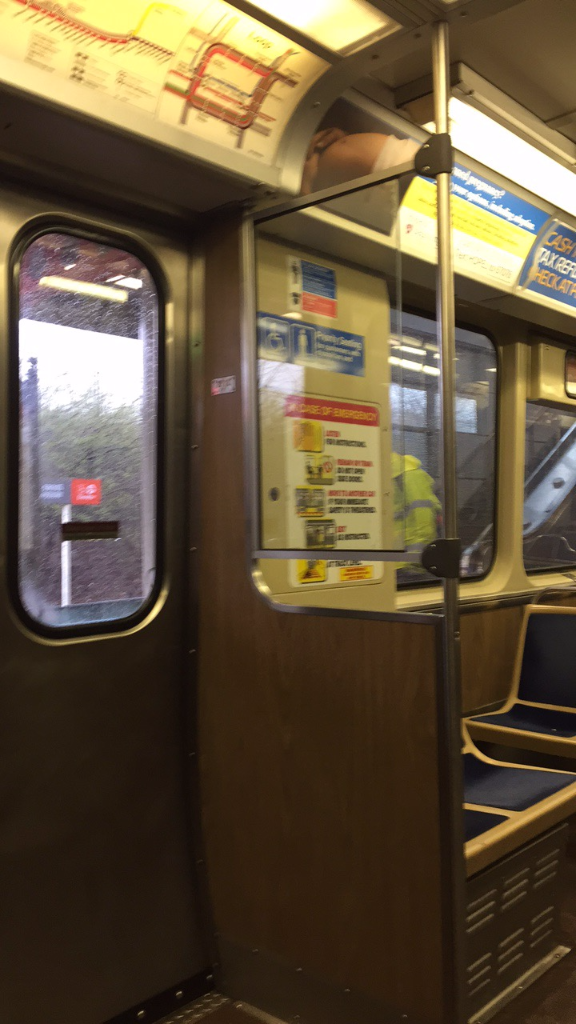 For the last part of spring break, I headed off to Chicago again for my other grad school visit. I flew Southwest Airlines into Midway Airport, and so took the train for 2 hours from downtown Chicago into the suburbia of Evanston, IL. (The airport of O’Hare is closer to Evanston, but Southwest is not serviced there.) It was raining hard that day, the water being blown sideways in whippish long streaks and wetting my lower legs as I walked along the platform. A kind stranger gave me an extra train ticket he didn’t use. I sat on the train and watched the rain drip from the roof of the cart as the brick buildings passed me by. I had to make two transfers, Red Line to Orange and Orange Line to Purple, but luckily all of them were underground and safely out of the storm.

A somewhat dismal view of the train

The Hilton Orrington in Evanston was quite pretty, much like the Hyatt in downtown Chicago. I walked a couple of blocks from the Purple Line to the Orrington bundled in my puffy down jacket and intermittently using my umbrella, the rain in Evanston like a mild chinook compared with the wintery storm of downtown. After check-in, I received my Northwestern itinerary and swag bag, which had a sweet water bottle and flash drive and a hoodie-style long-sleeve T-shirt. For dinner, the university had organized a trip to Giordano’s, one of the prized deep-dish pizza chains of the Chicago area. Compared with Connie’s, which I had tried last time with my friend Anne, Giordano’s had maybe 4 times the cheese–it was about as thick as the thick pan crust, nearly a centimeter. I didn’t quite manage to finish my two slices, of pepperoni deep dish and “Chicago style” which seemed like a supreme/combo flavor…

After dinner, we walked over to Northwestern University in a crowd of 50+, mostly inorganic chemistry prospective graduate students and some current grad students. The wind chill was killer, but not enough to stop us from marveling at the campus, specifically the buildings, the miniature floods in the soaked grass fields, and the lakeshore. Like UChicago, there are also some nice Gothic buildings on the Northwestern campus, such as this one:

We had a poster session in which we got to learn about the science going on in the various labs at the university. The chemistry department at Northwestern is pretty large, so the posters were spread out across 4 floors in one of the chemistry buildings! Here is a view of people trekking up and down the staircase to talk to different labs:

I did get to hear about some really awesome science. A grad student at the booth of Professor Dave Harris told me about an amazing conductive magnet project they had going on. For those who had gotten tired of science, there was also a cupcake truck outside.

Thursday night ended after the poster session, so my friend Judy from Caltech and I met up with our alumna friend Sheila, who is getting her Master’s at Northwestern in engineering design, for some frozen custard.

That’s it for Thursday. Till next time!