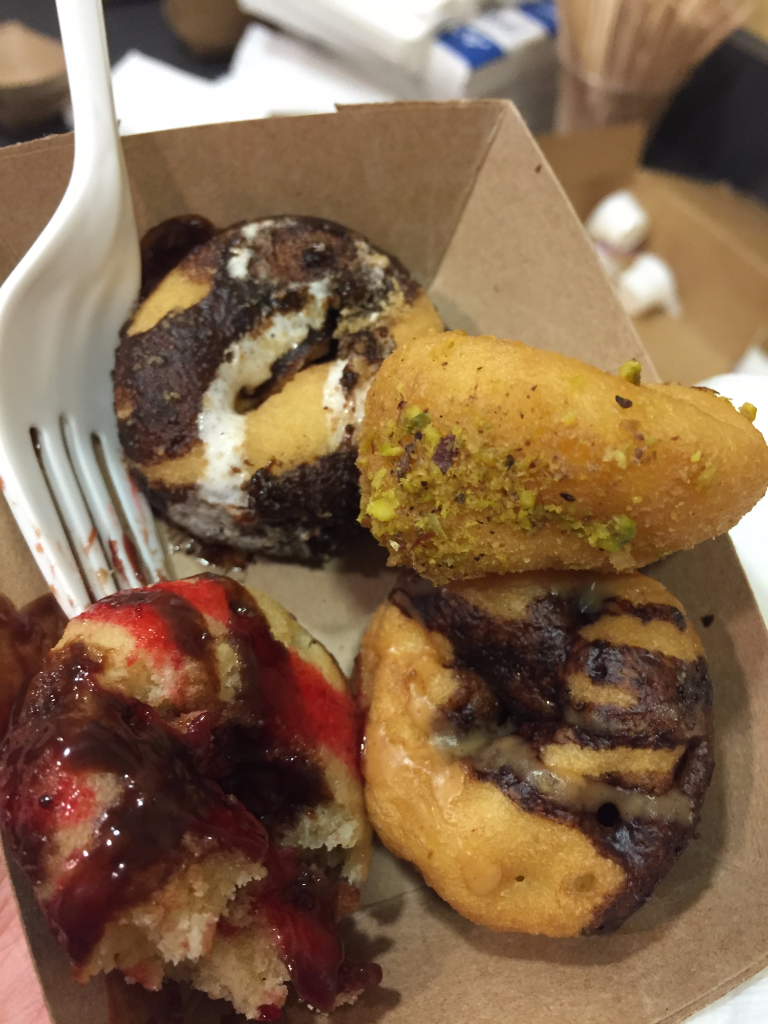 Friday! It was starting to feel very familiar, this Thursday-Friday-Saturday pattern of grad school visits, so forgive me if I gloss over what happened at Northwestern more than I did at the University of Chicago. Of course, it is no less important…

We attendedsome panels in the morning where we learned about the chemistry program at Northwestern, why we should go there (as opposed to “Cornfield U,” said Professor Karl Scheidt, making a not-so-subtle reference to the University of Illinois at Urbana-Champaign just a few hours south), and how to reimburse our paperwork for the visit weekend. I met my student host, Andrea, and as she shuttled me between professors, we bonded over our mutual enjoyment of writing and running and mini donuts.

Mini donuts during the morning coffee break The first professor I met was Prof Tom Meade, who ended up having to go teach his class, so we ended up chatting with some of his grad students. Next was Prof Chad Mirkin, who runs a 60-person group. While I thought his research sounded cool, I already knew from previous lab experiences I didn't want to be in that large of a group. Then I met with Prof Brian Hoffman. He also seemed pretty awesome, and reminded me a bit of my current research adviser, Harry Gray; he said he might be open to co-advising a student, much like Harry does. Lunch took place at a buffet in I think the one of Northwestern's business buildings. The dining room was divided into many round tables that seated maybe 9 people, and we could choose which professor we wanted to sit with. On whim I chose Professor Tom O'Halloran, because I'd heard of his name before but couldn't remember what he did and thought it would be good to meet as many people as possible, especially because Northwestern was so big. Our table, which included my host Andrea and a girl from Oberlin who had been a chemistry and cello performance double major until her sophomore year, had a most enjoyable conversation on scientific mentoring and music camp. The alumni panel afterward was interesting. We met someone who is about to become an assistant professor at UC Davis, one who is working at a company, and another who went into consulting. While I can say that after some meeting people I had gotten an image of a stereotypical UChicago student, the personalities of these Northwestern alumni were vastly different among one another. Some seemed more similar to the Caltech and UChicago student--very much a person with quirks and hobbies as in addition to being a scientist--while others had disappeared almost entirely beneath their career personalities and couldn't quite answer the questions we asked of "What made you choose Northwestern?" and "What resources at Northwestern do you feel have helped you?" in non-quantitative terms. Most curious indeed. I hadn't expected personalities of alumni to bring such intriguing perspectives as to the personality of the school--yet another reason for visiting these schools in person to get a feel for the people and environment between what you can read about their research on a website at home. There was time for one more faculty meeting, and so I met with Professor Dave Harris, who told us about some exciting work his group is doing with magnets (!). In the afternoon, we went on a campus tour. The university is very proud of their MRSEC instrument facility: We also learned that the 4 major chemistry buildings are all connected by indoor bridges so one never has to wander outside in the cold months: Outside, wind chill was terrible and the lake looked vast and cold: And this is me posing beneath the Northwestern arch: The business part of the day over, it was time for dinner and socializing. We would be dining at the house of Prof Chad Mirkin--one of those pretty Evanston suburbia homes whose interior I'd always wanted to see. The grad students told us that Prof Mirkin hosts department holiday parties of up to 130 people in his house... A view down the street of his house: They had hired some caterers for this event, to feed maybe 80 people. Food was delicious--different types of quesadillas, roasted meats on skewers, stuffed potatoes, butternut squash soup, pita chips and lots of spreads, cheese and cracker plate... Caltech selfie! From the right, Gerri, Judy, Lennon and myself: The next morning, I met up with Sheila again at a coffee and tea shop called Cupitol, where I had the most amazing scone I've ever eaten in my life.Northwestern took us downtown to the Hancock Tower for Saturday lunch. I got to meet more grad students and, as usual, the food was amazing: As were the lake views during the day: Then I went to the Art Institute of Chicago (second time after going for UChicago), meeting up with a friend from Caltech with whom I could legitimately geek out about all the art this time for a few hours. Northwestern had left us to our own devices as to how to get back to Evanston, so I drove back with my friend and went to his house for a bit, where his mom cooked us some Russian food... Sunday noon--had some mishaps where I got into my Uber but forgot to check out of the hotel, but for the most part reached O'Hare well in time before my flight back to Pasadena. Term would start the next day. I had thought that once I finished visiting the grad schools, the choice of where I would go next year would become clear--as it was, I found myself liking and disliking parts of both schools, and realized that my decision had only become harder... That brings us to the end of Visiting Grad Schools 2 of 2! I apologize for the multitude of food pictures--for me, eating is always a part of any travel experience I have, and my more academic thoughts on grad school choices are too long, and probably too boring, to type in their entirety in just one blog post. Thanks for reading, and see you next time! Anita