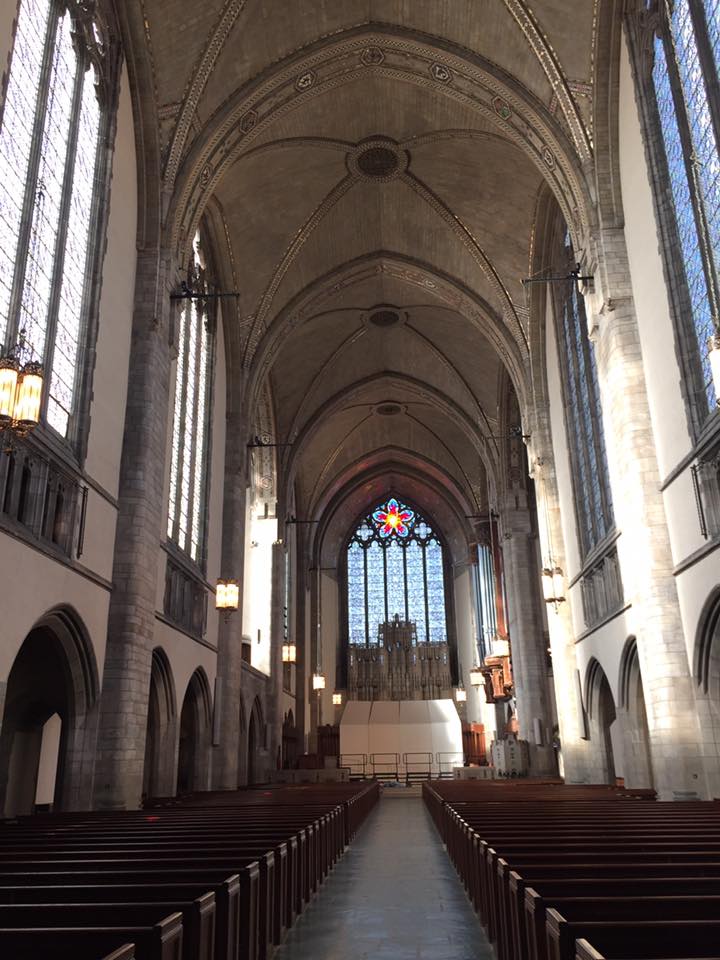 Fridaybegan with breakfast at the hotel, where I got to know some more prospective students over conversations about where to find the coffee (it was not located with the rest of the food) and which breakfast sandwiches were the most delicious. Then we bused over to the University. The day was divided into 40-minute chunks. I had meetings with five professors and one free period. Since this was my first visit weekend, I didn’t really know what to expect at these meetings, whether I should bring a notepad or not, etc. I decided to just wing it and use my ears and mouth.

At 9:20 a.m., my grad student host Dan walked me into the office of Professor Michael Hopkins. I was the first student there, so Professor Hopkins and I fell to talking about my background in chemistry (doing research on flow batteries) and our mutual hometown (San Diego). We also had a Caltech connection–he had gotten his Ph. D. at Caltech under my current senior thesis adviser, Harry Gray! The three other students had showed up by this time, so Prof. Hopkins began to talk to us about his research involving conductive 2-dimensional molecular frameworks. It was a really fantastic, intimate conversation where no one hesitated to ask questions. In what seemed like no time at all, the grad student hosts were knocking at the door ready to whisk us off to our next appointment.

My next session was with Professor Wenbin Lin, who works on metal-organic frameworks (MOFs) as well as nanomedicine. This time there were only two of us prospective students, and since we had both listed our interests in the chemical biology aspect of Professor Lin’s research, he regaled us with tales of nanomedicine as well as some of his thoughts on the future of medical industry.

“So will there be a lot of jobs for chemists who aren’t also M.D.s in this kind of field in the next five years?” I asked.

“They’ll all start their own companies!” Professor Lin declared emphatically.

It was kind of funny to see the Caltech name being thrown around in so many places. Coming from the school itself, and it being such a small school too, I had just gotten used to hearing all of these professors’ names on a casual basis. And I either have met these professors in person by taking their class or hearing them speak at a seminar, or know grad students working in their labs; it stopped becoming quite as big of a deal as it maybe should be that all these cutting-edge minds had taken residency at my undergraduate institution, and it was interesting to be reminded of that as soon as I had left the Caltech bubble. After lunch, where I got to talk to Professor Hopkins again over some nice chicken salad croissants, Professor Anderson took all of the inorganic and materials chemistry prospective students on a facilities and lab tour, and the Caltech name was thrown around some more. I think maybe at least 1/3 of the faculty I met that day had gotten some kind of a degree at Caltech, whether a Bachelor’s, a Ph.D., or a postdoc position.

In the afternoon after my last meeting with Professor Chuan He, my host Dan took me on a quick tour of the campus. He knew that I liked classical music, and Gothic architecture, so we went to check out the Chapel. Unfortunately, we could not stay for the choir performance, but we did get to see the organ on stage and the stained glass windows.

Despite its name, the Manhattan project actually had its start at the University of Chicago, and there are plaques, a Lego miniature, and even a mushroom-like bronze sculpture on campus to commemorate it.

This is a Lego version of the stadium at Stagg Field of the University of Chicago, where the world’s first artificial nuclear reactor was built in November of 1942! Sadly, I didn’t manage to get a picture of the mushroom sculpture as well.

Next up: night life in Chicago, featuring splendid views of the city from the penthouse of the tallest building downtown.