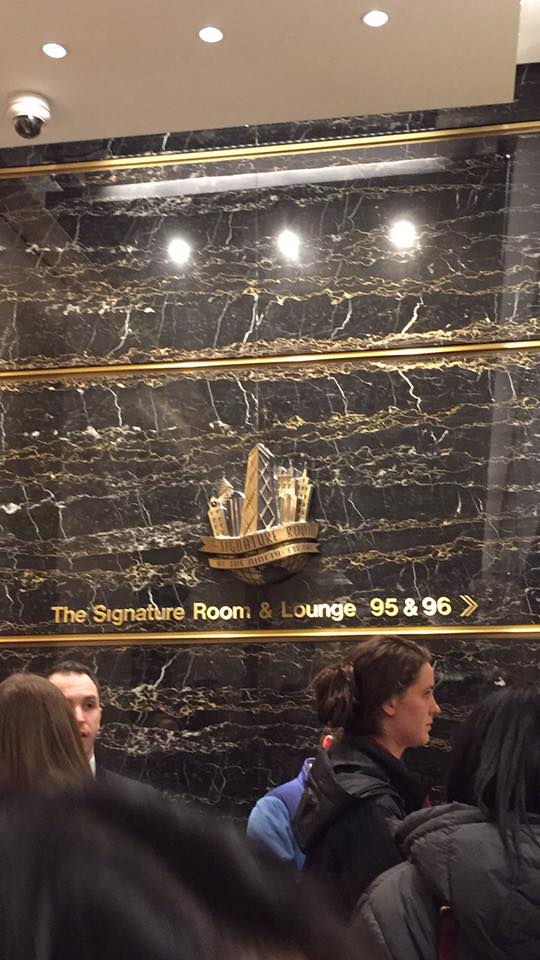 The Friday at UChicago continued! The dinner event, allowing for more mingling, would be a banquet on the 95th floor of one of the tallest buildings in Chicago, the John Hancock Center.

Everything between the lobby and the penthouse seemed to be restricted to office space, so there were two huge elevators that could fit maybe 30 people each shuttling the public back and forth between the floors. Here’s a picture of the crowd by the fancy marble walls of the lobby:

The elevators were so fast and smooth that we didn’t even realize we were moving until we felt our ears pop from the altitude! Once we got to the top, there were some really gorgeous sunset views:

Here’s Connie (left), Joe (right) and I posing for a Caltech selfie during the line for coat check:

UChicago had booked out an entire room for the evening for its chemistry prospective students!

Stepping into the room at last, we were treated to a bird’s-eye view of the city:

We also ventured over to the window to take many, many pictures as the sun began to set:

Of course, there was also some tasty food. Below, crispy bacon and smoked salmon on avocado toast:

I talked a bit to our fourth Caltech visitor, Lennon, who had taken a red-eye flight Thursday night and so missed the first day of activities. I also met more grad students, who told me about daily life as lab rats–just kidding, but not really; if undergrad is all about classes, then grad school (for Ph. D., not master’s), is all about working in lab. And that’s actually okay. I feel that Caltech has prepared me with enough background knowledge and research opportunities to immerse myself full-time in a lab environment. All of the grad students and professors were dressed to the nines, but the undergrads had not had a chance to return to the hotel since we left it this morning, and so were milling about in that beautiful banquet room in long pants and wool sweaters. Ah well. At least they had taken our puffy winter coats!

For dinner, I sat down between Professor Jared Lewis, the C-H functionalization guy, and Dan. Professor Lewis told me thatone of the parts he missed the most about Caltech was this restaurant called Zankou Chicken. “I’ll have to go before I leave,” I said, mentally throwing it on my bucket list.

He looked scandalized. “You mean you haven’t had it yet?!”

“My friend actually got food poisoning once,” I recalled, “though lots of other people love it to bits. So I’ve been a little cautious about trying it. I heard it’s good.”

On my other side, Dan was chatting to fellow grad students Rebecca and Joe about science poetry. Rebecca had been a chemistry and English major back in undergrad. Thinking of my own English minor, I was happy to learn that there were science-Englishy people here as well.

Hmmm. I have definitely felt the same way, lamenting the fact that many of my Caltech friends struggled with understanding literature and that my friends from high school thought most science too over their heads. I’d compare it to the immigrant-American identity, in a way–especially for those of the 1.5 generation, who have the strongest ties to the old country yet grew up in the new one. I’m too American for my Taiwanese cousins, but too traditionally Asian for some of my classmates; I sound like a chemistry nerd when I talk to my high school friends about concepts that I know of like the back of my hand, yet compared with my chemistry friends at Caltech, the wiring of my brain and its intuition for English literature means that I’m slower at picking up scientific concepts than a lot of my peers. Having an intuitive understanding of both cultures tends to make you a strange, hybrid, outcast in a community of its own, belonging fully to neither culture. It can be lonely, straddling two extremes, but why not embrace it and call it your own and share it with others?

“I wrote a poem called ‘Sonnet to the Sonicator’ once,” Rebecca grinned. “And my lab instructor put it up next to the sonicator in the student lab for the rest of the year.”

Dang. That sounded cool. I asked if I could read it?

“Dan,” Rebecca said, poking the arm of my host, who had been nodding along to the conversation, “remind me to send Anita my science poetry chapbook later when I have Internet.”

“All right,” Dan said. I remembered that he also liked to read–earlier that day, he’d told me they had a book club and I’d suggested Neil Gaiman’s American Gods for their next project.

Our salad course for the evening was this asparagus, onion and bacon contraption whose name I have forgotten:

It was the first time I have had filet mignon! I decided that the rareness was a little too raw for my taste, but it was very good:

Joe (my friend from Caltech, not the grad student) and I reconvened after dinner and went on the dessert search. Dessert was spread throughout the room at various stations along with coffees and teas. Cherries jubilee, key lime tarts, chocolate mousse cake, parfait, walnut blondies, I managed to try a bit of everything but it was almost more than I could stuff in my face…

We also took some more pictures of the amazing Chicago skyline. I mean, who gets to look at the city from 1,054 feet up every day?

Looking out of the window, we could see Lake Michigan, and the twinkling lights on the far shores, someone told us, belonged to Michigan and Indiana. We tried to take one more selfie that partially captured the cityscape below with its twinkling lights and lack of Los Angeles air pollution:

The banquet ended at 9:30 or so. Some of the profs went home but a bunch stayed, and we headed off in groups to three more attractions of the evening. First, Pinstripes Bowling Alley, the classiest bowling alley I have ever been to:

Then around 11:30 or so we headed off to Kingston Mines, an authentic Chicago jazz bar with a live band!

At 2 a.m. someone decided it would be a good idea to take a walk down a few blocks and treat the visiting undergrads to some Chicago-style cheddar hotdogs, a.k.a. “chardogs.” I wasn’t complaining, for they were delicious, and it was such a fun crowd, a bunch of really tired chemists aged 21 to 30 from all walks of their careers (honestly, some of the profs that came with us I could have mistaken for older grad students), raucously shouting at one another in the crowded ordering area of Wiener Circle like post-football game Chicagoans traditionally do.

Here’s a picture of the chardog and all its trimmings!

It was definitely my wildest night in Chicago :)

In the final installment of Visiting Grad Schools: U of Chicago–the green river for St. Patrick’s Day, buying a foot-long gummy snake from the candy shop on Millenium Mile, and deep dish pizza with Caltech alumni!