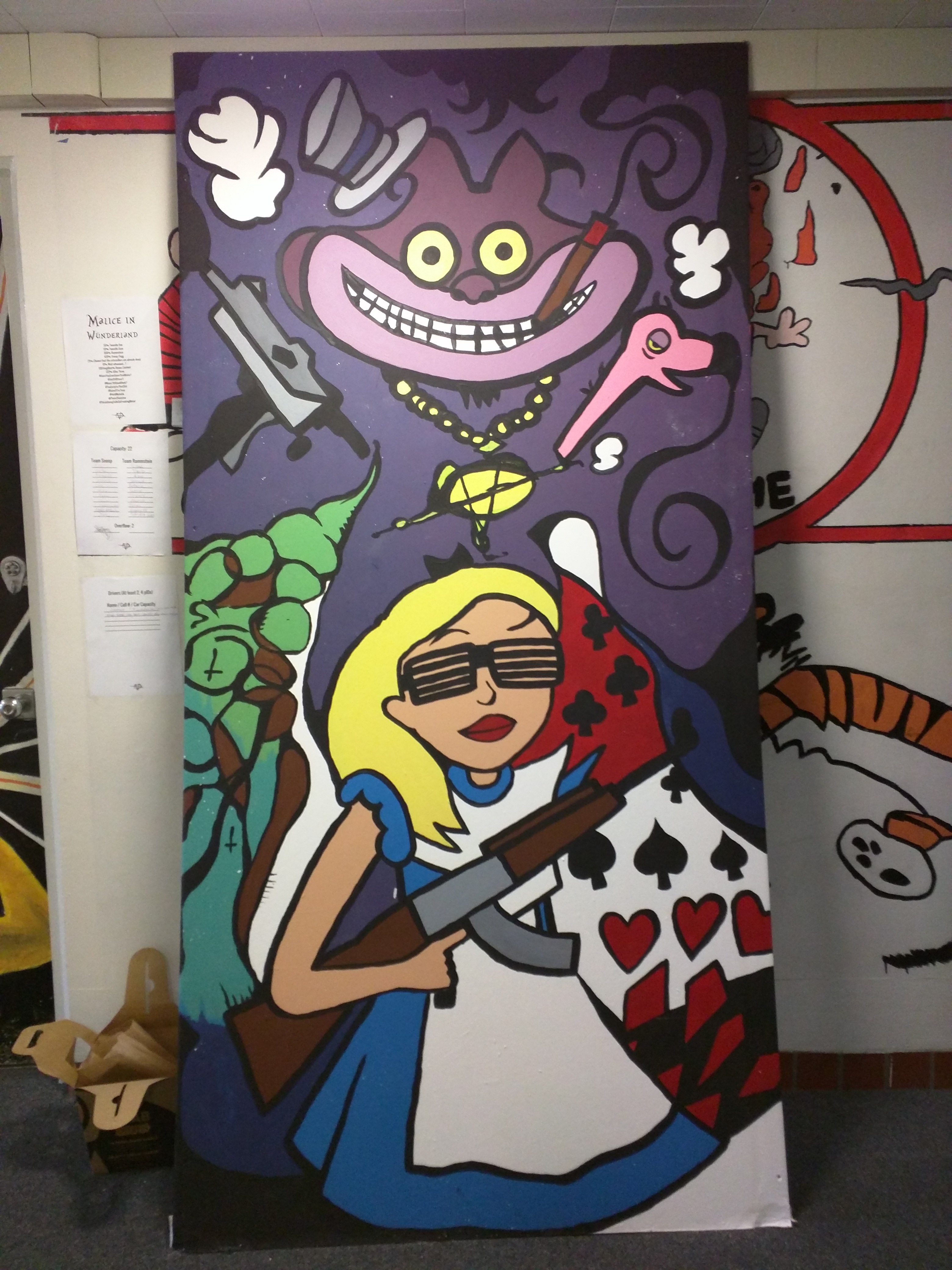 What do Snoop Dogg, Alice in Wonderland, and a German heavy metal band have in common?

Friday, May 22, 2015 was the real senior Ditch Day, and it was glorious. Below I will chronicle the day’s events.

We woke up, jittery, around 7:15 a.m. (at least 2 hours earlier than usual, for me), keeping our ears on alert for any strange noises, getting geared up for the day. As my phone clock ticked to 7:45 a.m., the noises began. “Wake up frosh, it’s Ditch Day!” the seniors cried out, testing the limits of our poor old doors as they banged their fists against our whiteboards. We became even more tense, poised right at our door, ready for the blowhorns to signal us to leave the room. After a flurry of movement that led me down the hallway, I found myself squished in the middle of 22 people all vying to touch this wallboard:

This was the one and only Malice in Wünderland stack, masterminded by seniors Jim (my amazing UCC), Caro (my Bi1 TA and ChemE advice giver), and Meera (almighty leader of Dhamaka). There were a couple of people who left and joined in the 15 minutes before 8 a.m., and in the meantime, we tried to find more comfortable positions in the mob of people:

At 8 a.m., we signed up for teams Snoop Dogg and Rammstein:

We then enjoyed Einstein bagels and changed into our fabulous shirts, featuring heavy metal Alice. Alums come back to help with stacks, so we had one alum dressed up as the Cheshire Cat, with a huge mask created using papier mache on an exercise ball:

Another alum was Snoop Dogg:

And another was the Mad Hatter:

Once everyone changed, ate, and filled out their waivers, our journey began. We fit 22 people into Venerable’s screening room to watch a brilliant intro video featuring the cool beats of Snoop Dogg, Alice in Wonderland, and Rammstein (du hast, du hast mich…):

We also ended up with aprons on, to truly channel that Alice fashion. We then headed over to the fields behind the gym to experience what it’s like to shrink. Hamster ball races!

I guess we grew again, because we found ourselves painting tiny teacups:

During this time, we also composed raps, which came into play later. All 22 of us reunited to watch videos on how to decorate our aprons:

We also learned how to make flamingo “croquet” clubs, which we used to play a round of Venerable House golf. Here’s Sirus modeling his apron and club:

And here are some more fine members of the stack showing off their crafty creations:

In order to find some clues (and make use of the golf clubs?), we had to bash open and search through various containers, including a box full of dough, a bowl of oobleck, and a computer:

We then headed off to perform our raps for Tweedledee and Tweedledum at Nothing Bundt Cakes, a quaint bakery on Lake Avenue:

It turned out that all of the raps we wrote were meant to go in sequential order, 8 lines each, so the groups went in one at a time to perform their masterpieces. I beatboxed for the two raps from Team Snoop, and the first one ended up winning. I’m not sure what the justification was behind that, but I was okay with it. They gave us two boxes of mini bundt cakes, which we shared as we walked back to campus. This was probably my favorite part of the whole day.

Next was a hike up Millikan library’s 8 flights of stairs, all while listening to Jim and Matt talk about how life was at Caltech “back in their day.” The video included 2 minutes of bluegrass, 10 minutes of “back in my day,” and maybe 2 minutes of actual clues. We were directed to certain books in the library through their call numbers, and found tickets and CDs. Then we headed over to Winnett for a “tea party.”

We worked on a crossword puzzle that included everything from “The only hallway in Venerable House that matters” (Alley Three) to “The kind of stress that is expressed by (σ1+σ2+σ3)/3” (We had to look in Jim’s ME65 notebook for the answer, because Google gave us the wrong answer). For one of the clues, we played a game where we had to sing at the correct frequency to shrink a box. 42 times. After we finished, we had an elephant toothpaste demonstration with our “tea”:

Finally, we reunited with our seniors and headed over to play laser tag. When we arrived, we saw that our reservation was for “Alice’s Birthday Party,” replete with balloons and unlimited soda:

We played laser tag twice, and I had an astonishing accuracy of around 2.4% both rounds, the lowest of the group.

We headed back home after an exhausting and full day, and exchanged stories with the people on other stacks. Venerable’s other stacks were The Jungle Book, The Hobbit, Carmen San Diego, and a joint stack with Ricketts, Pulp Fiction. It took me a long while to feel like working again, but the four-day weekend was generous in those terms. These are the souvenirs I took back from our stack, in addition to the huge cat head that is currently sitting in our room, and filling up what feels like half the space.

My first Ditch Day was an amazing experience, and I’m so excited for the ones to come.