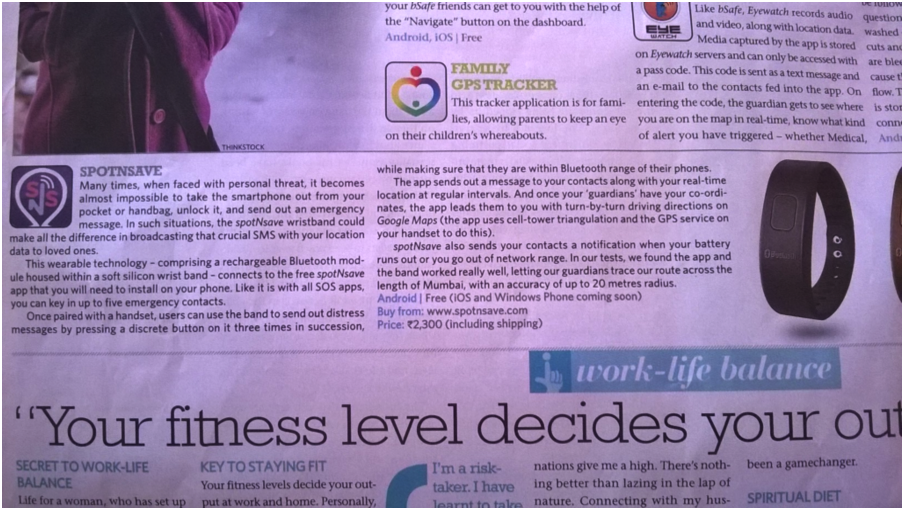 Early Saturday morning, about three weeks ago, our Indian professor Bhaskar emailed the image below to our ME105 class. While flipping through the morning newspaper in India, he came across an article about a new device called spotNsave and immediately thought of our product design class. Within minutes of skimming the story, he’d pulled out his Blackberry, snapped a photo, and sent a mass email to all forty students.

The group– consisting of Michael (Caltech), Anastasia (Cal Arts), Abhimanyu, Kushal, and Ujash (IITGn)– began their project last December after our ME105 field trip to India, though Michael and his friend Karan came up with the idea last summer. After the trip, the 4 other team members were assigned to the project, chose the team name “Rakshak” (meaning “protection” in Hindi), and got right to work. For the next term, the team coded the application, created a prototype for the wearable device, and designed a sleek user interface.

After reading Bhaskar’s email, our American prof had some words of wisdom for Rakshak and the class as a whole. Ken responded with his realistic but optimistic outlook:

“One argument for all the teams when you see something like this is to say - well the market is being confirmed which is a good thing and we should continue development. The market is large and we can get a piece of it. The other side of the argument is, oh no, we’ve lost “first mover advantage.” If you take the optimistic direction, it would behoove you to find some piece of the market that is not being addressed by this product before you continue.”

Bhaskar replied, “I agree. I think this is a vindication that we were on the right path! We should continue nevertheless and make our device better than this offering.”

The profs and students agreed that throwing away more than four months of hard work seemed silly. While spotNsave is a great product, frankly, I think some of our class’s design choices are smarter. Here’s how the two products differ:

1) Rakshak incorporates a crowd sourcing element that spotNsave does not have. When a Rakshak user finds him/herself in danger, the application will contact not only the person’s emergency contacts but also Rakshak members within a user-specified radius, called a Neighborhood.

2) Rakshak’s interface is intuitive and easy to use, with more visuals and less text. The first screen below shows how a user might pair his/her wearable device with the application by dragging an idealized wristband toward the icon representing his/her phone. The second is an easily accessed preferences, settings and history menu. The last screen is a possible method for choosing a Neighborhood radius in a visually appealing manner.

3) The logo and application name are cleverly designed. Anastasia designed the logo to evoke a city block with intersecting streets. The app name, Bloc, has three meanings: a group of people, to defend, and a neighborhood. Each meaning relates to a unique aspect of the product.Users can choose the logo color scheme to match either the color or accents of their wearable device.

4) Rakshak’s BLE (Bluetooth Low Energy) technology allows them to sell their product for a lower price than spotNsave’s product. Furthermore, users will not have to recharge their devices each day. With BLE, a coin-cell battery can last up to a year before needing to be replaced.

With all that in mind, it makes sense that Rakshak is continuing with development and, eventually, manufacturing. It’s great that a trendy personal emergency device already exists for the Indian market. A new product, especially one that’s cheaper and sleeker, can only benefit the customer.

That’s all for now,