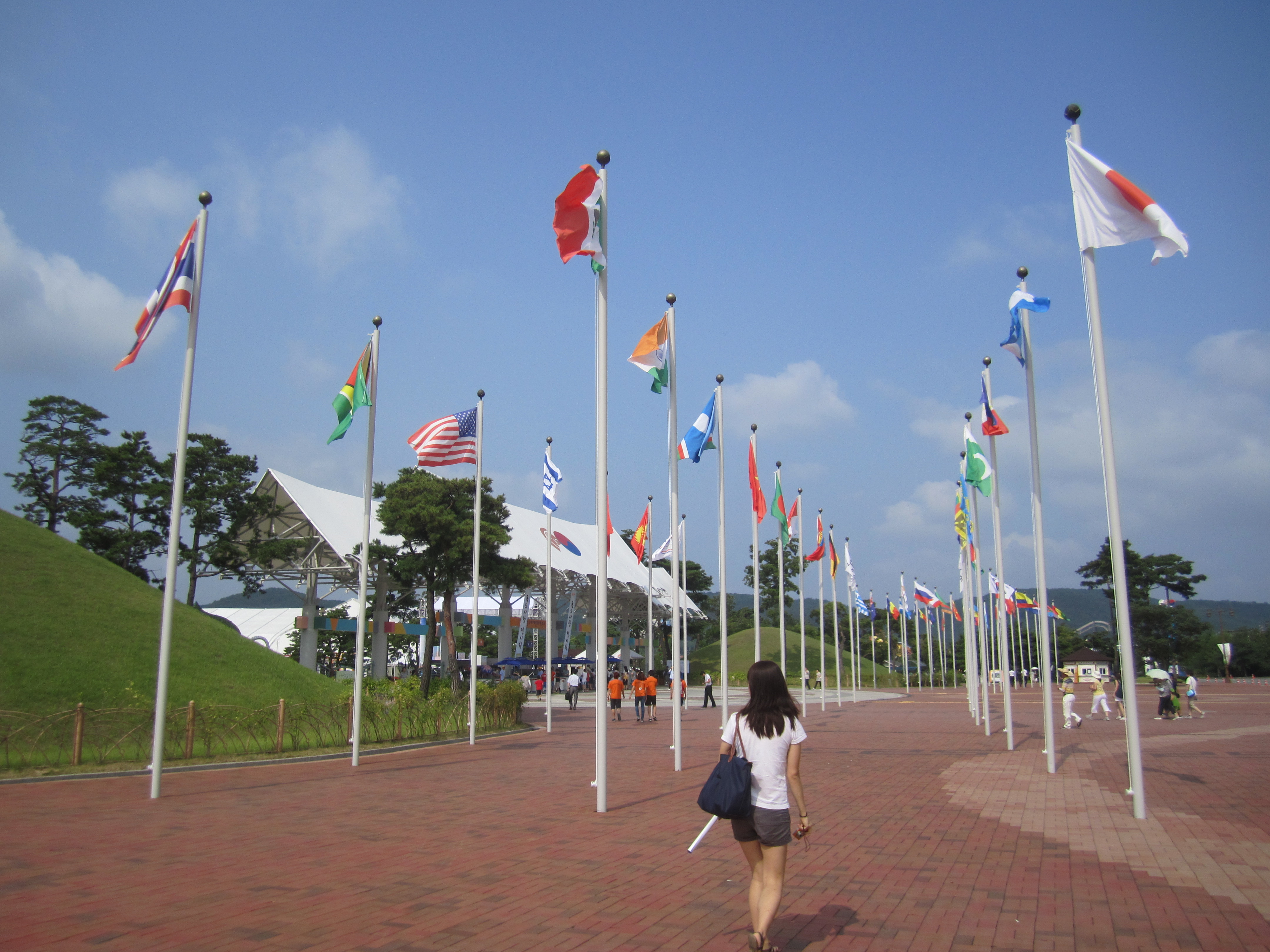 After we caught the train to Gyeongju, we took a bus to the fair ground. While we rode the bus, some Korean high school students were laughing at me being a foreigner. This is the only time I was treated less than well for being a foreigner. I think they maybe wanted to practice their English with me because when I stumbled one of them asked if I was okay, so maybe they were just excited to see a foreigner.

The next official World Expo is also being held in Korea (in Yeosu) in the summer of 2012, so this World Expo was not an official universal expo, I think. It’s full name is the 2011 Gyeongju World Culture Expo.

After we arrived we snacked on the yummy steamed red bean buns Kyung Ha’s mom bought for us.

It was really, really hot. We wandered around the grounds for a little bit because they were really pretty. This huge building dominated the grounds:

There was a stage at the base for concerts, too. However, the temperature drove us inside quickly, so we walked through a building with models of famous Korean buildings and an art gallery. The eaves of traditional Korean temples and important buildings are super detailed and fancy so there was also a description of how to construct the eaves. I couldn’t understand since it was in Korean, but it looked complicated.

I liked most of the paintings in the art gallery, but this is my favorite. I love the paper boats.

After this we braved the sun for a little bit and watched a music performance by a group from Cambodia, I think.

We were fanning ourselves, but we couldn’t take it anymore, so we escaped to a geology and fossil exhibit in an air-conditioned building. They had a lot of petrified wood and I really liked seeing all the rocks. Kelly’s dad is a geologist though, so she had seen it all before. Here are some of the things I saw:

There was so much petrified wood!

On our way see a drum show we saw some people blowing giant bubbles! I love bubbles, so here is a photo:

The drum show was also very cool. The drummers were from Taiwan, I believe and they made the drumming into almost a kind of dance.

Next we braved the sun again to look at the gardens on the Expo grounds. We used our umbrellas to shield ourselves from the sun, but it was still unpleasantly hot.

We also saw many sculptures around. Here are pictures of some of my favorites:

My very favorite was the CD wind chimes. I’d like to try to make it myself.

Kelly’s favorite part, I think, was when we stumbled upon a building that contained sets from the Korean drama Athena. I had never seen Athena, but I enjoyed it too because of the air conditioning. (:

We ate some really spicy gyros for lunch at one of the only places where there were booths from different countries. They were primarily Asian countries and you could buy souvenir-y type things there. There was only one other place with international booths, but that place included more information about the various countries. The majority of the expo was unrelated to the non-Korean things.

After lunch, we wandered through the remaining air conditioned buildings before taking the elevator to the top of that really big tower. There were a couple of interactive museums that told Korean legends about the birth of certain kings or the building of temples or other old stories. I was struck by how similar the themes were to Western stories. Once we reach the top of the tower we could see all of the grounds.

There was also a display of various cool rocks.

The most interesting thing, to me at least, was this handout they gave about Dokdo Island. It is a mostly uninhabited island located between Korea and Japan and both countries lay claim to it. Only two people officially live there. I don’t know the whole story, but the handout made a big deal about land surveys from as long ago as 1785 that referred to Dokdo as part of Korea. They especially emphasized how a Japanese cartographer had regarded Dokdo as Korean. It is not the only thing I’ve seen that makes pointed comments about Japan and Dokdo, but it was definitely the most obvious.

After we came down, we headed to the entrance but we stopped to watch a strange parade on the way. I don’t know what countries the floats were supposed to represent. It was a little strange.

Overall, the whole expo was an eclectic collection of things. I’m still not sure what the overall goal of the expo was, but it was very fun to go see.

Afterwards we headed back to Gwangju. I wish we could have stayed longer in Gyeongju because there are a lot of tombs and other cultural things to see there, but we had to get back to Gwangju before 10 pm so that we could catch the last bus from the terminal to GIST.

When we tried to buy tickets on the first train we needed to take, they only had first class tickets left. Let me tell you, first class is not worth it. All we got was a little extra leg room when the normal seats had plenty anyway. It was very busy because it was the end of a holiday weekend.

While we were waiting for our bus at the Daegu terminal, it started to rain. We thought we had finally had a weekend without rain, but no luck. At least it only rained at the end! On an unrelated note, here is a picture of a van I saw in Daegu. The Korean cars and trucks really have a different overall shape than the ones I see most commonly in the US, so I thought it might interest you all to see one.

In the next blog, I’ll tell you about the temple stay GIST organized for us. It was pretty interesting and not at all what I expected.