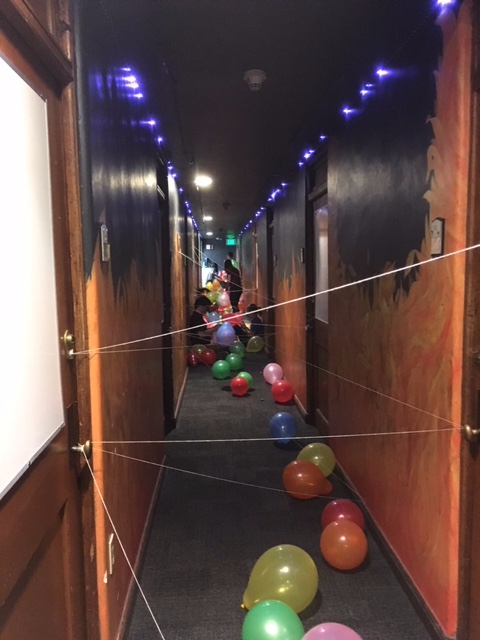 All the prefrosh came, and then left for frosh camp. But we are so excited to have them here! A couple of friends, Qiao Qiao and Bethany came up with the idea of giving them a welcoming gift: filling the all-frosh hallway – Hell – with balloons for when the prefrosh who lived there returned from frosh camp. So they bought a bunch of string and around 1800 balloons and recruited anyone who was willing to lend their lung capacity (or air compressor) to fill up the balloons.

It was very cleverly done, such that only Hell was filled with balloons, with string set up on either side to keep the balloons contained. In the end, everyone was able to fill up the hallway with enough balloons to be chest height all the way down. In addition, the air expanded under the lights so that by the next day, the balloons were to the ceiling for the prefrosh’s return.

When they arrived for the big reveal, they were very bewildered, before those present armed them with forks and sent them down the hallway to find their rooms. I also walked down the hallway, which was really fun: with each step, I would be buffeted by balloons, and I could barely see the person in front of me as I ventured down. At times, there were actually too many balloons to see the other people with me, and instead, we would yell at each other in congratulations for a beautifully pulled off prank.