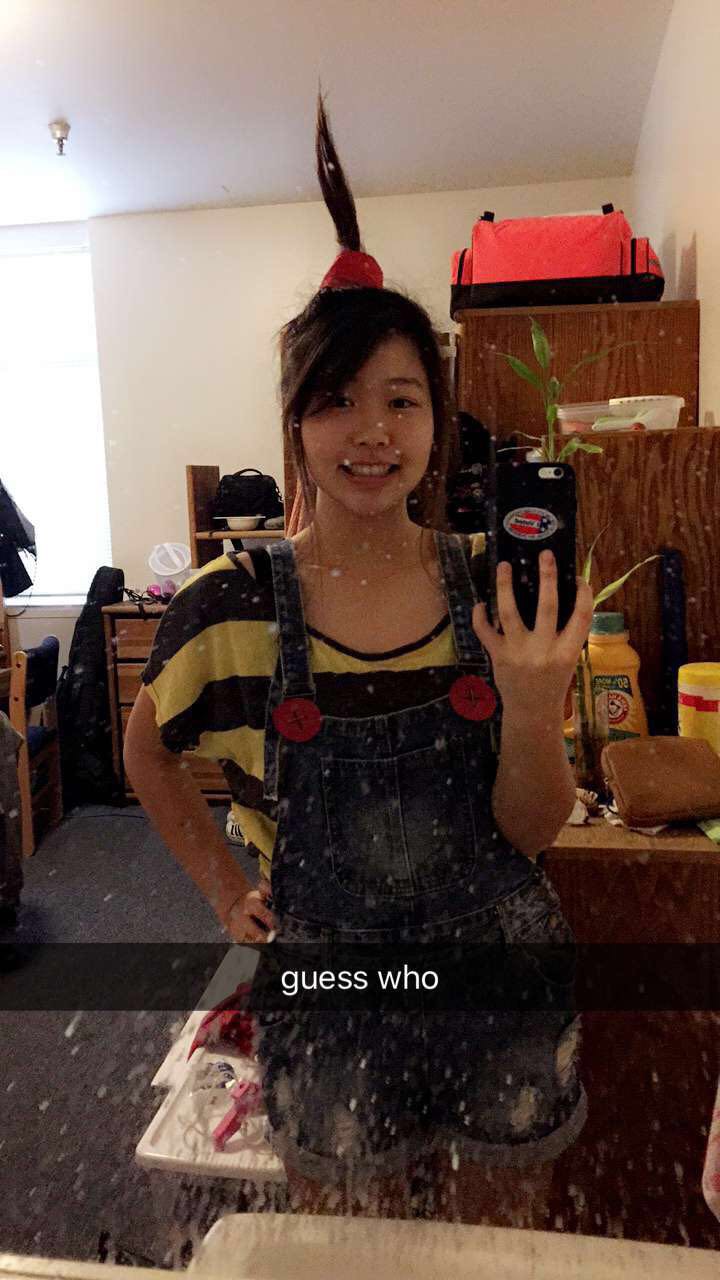 Boo! Halloween has come to be one of my favorite holidays. When I was little, it would always manage to rain on Halloween night so that trick-or-treating was messy. I like it now because it’s the one day a year that I get to be someone/something else and amuse people when they recognize it. That is, in theory. I’ve been pretty bad at being other people/things so far. I’d like to say I improved this year compared to years past. Can you tell who I am?

I was missing a fluffy unicorn, but I was Agnes, the little kid from Despicable Me! If you thought this was tough, you should’ve seen the year I was Sheeta from Laputa (Castle in the Sky) or the year I was Lady Gaga’s then-most recent album, the Applause one where she has colorful paint all over a white-coated face. Lemme just tell you–when you’re a poor college kid scrambling to be creative, don’t try to use excess sunblock as white facepaint. It just absorbs and gets icky and you smell like the beach when you show up for dinner. And everyone just thinks you’re a zombie, which is probably more accurate anyway.

Every year on Halloween, we have our own trick-or-treating on campus. Tom Mannion buys 1837642020 (close approximation, not me just facepalming my number keypad) calories-worth of full size candy bars, and it’s not just your typical Snickers and Twix–though those are quite yum, too. My favorite is the 100 Grand, and Halloween is fantastic because I get a free stash for the year. (At least, I tell myself they’re for the year. They usually don’t last that long…) For the health-conscious, there were also lots of good fruit. (: I didn’t go this year, but Dabney Hovse conducts an experiment at Millikan library every year. Sugar, if crushed really fast, produces a glow called triboluminescence. To try and see this happen, some students from Dabney (Darbs) flash-freeze pumpkins in liquid nitrogen and throw them down from the roof of Millikan library. Some alumni have seen the flash before, but I have not.

On Sunday before Halloween, Avery House had our annual pumpkin carving event. Members of each of the alleys carved pumpkins into anything from the Death Star to Edvard Munch’s Scream to a two-pumpkin “Nightmare before Frozen” man (think snowman, but pumpkins). Tom Mannion and Jim (a Ricketts alum from a while ago) were the judges. The winning pumpkins were displayed at the president’s house for Halloween, and we brought the rest back to Avery to display for the week/until someone gets sick of the smell of rotting pumpkin.

What do you do for Halloween? Curious if Tom has your favorite candy for Halloween trick-or-treating? keep lookin’ up,  jenny.