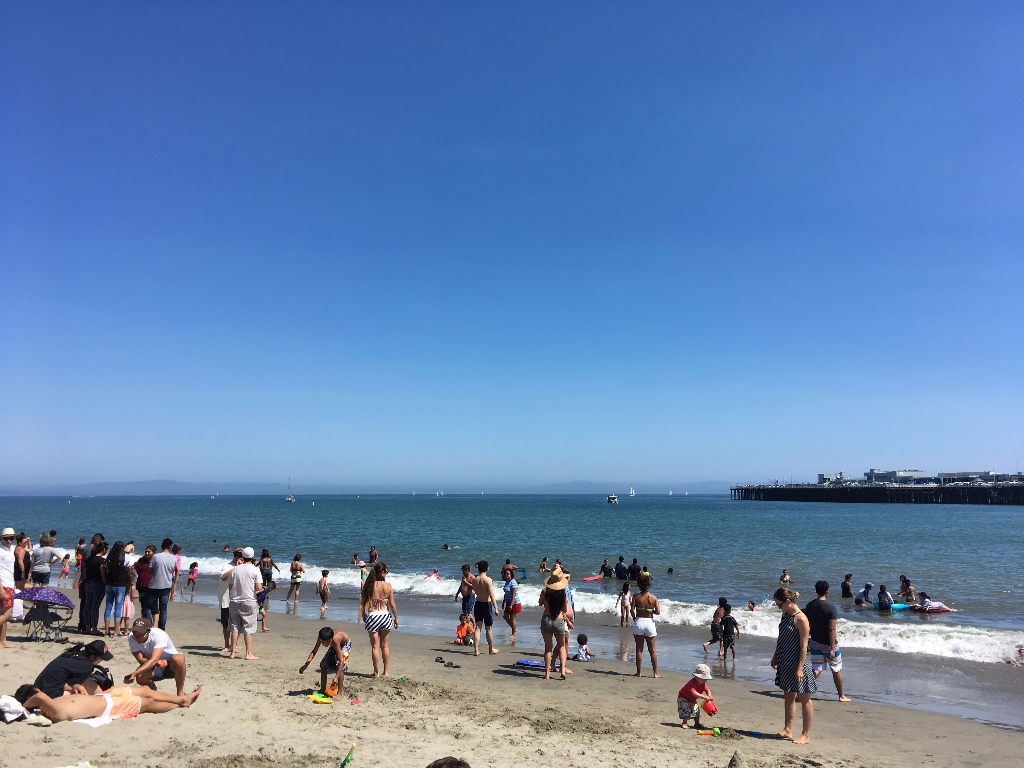 A Day at the Boardwalk

Where else to go on a hot day other than the beach? At the Santa Cruz Beach Boardwalk, there are amusement park rides, carnival games, an arcade, andthe beach!

Santa Cruz is about an hour's drive from the Bay Area and can get pretty crowded on a summer day. Santa Cruz is home to one of the oldest wooden rollercoasters in the world, the Giant Dipper. Built in 1924, it's the 12th oldest rollercoaster in the world, and the 7th oldest still in operation in the US. No wonder it's a National Historic Landmark! Even though it was built so long ago, it's definitely an exhilarating ride. Since the space isn't huge, the cart winds in and out of the wooden structures several times, and the whole ride is populated with ups and downs. I would consider it to be one of the best wooden rollercoasters I've ridden. I also loved the drop tower because of the great views at the top. The ride shot up, then went up and down twice. Since we were facing the ocean, there were sprawling views of the surrounding beach and ocean. After lunch, we got airbrushed tattoos, which last anywhere from a few days to a week. I got a phoenix on my side and a feather on my ankle. Along the Boardwalk, there are also caricatures, face painting, and lots of snacks to buy including fried oreos and crepes.
Watching our friends who didn't want to go on the drop tower ride the pirate ship :P
Alice getting an airbrushed tattoo. The arcade had laser tag, fruit ninja, and flappy bird in addition to more classic games like skee-ball. It also had Asteroids, which is a newly discovered favorite of mine! I played it at the Neon Retro Arcade in Pasadena, which is about 15 minutes away from Caltech, and I was really excited to see it in this arcade. Apparently it's too old or just not popular though, since I was immediately in the top 10 the first time I played it -- and I did not get a great score. I was also extremely lucky here. First, I won the regular jackpot at one machine, and then I won the monster jackpot at another machine! The first jackpot was about 200+ tickets, and the second jackpot was 1700+ tickets. With my winnings, I got myself a stuffed animal otter, and then pooled earnings with two friends to help them get a nemo and a tsum tsum.
In this game, you press a button to drop a ball down a tube in the back, which is aligned to one of the outer holes. The regular jackpot is in this outer ring. To get the monster jackpot, the ball has to bounce into the elevated center hole.
Me and my prize otter! The Boardwalk was really fun and I would definitely go again! One last recommendation is riding the carousel. It's pretty unique in that each time you go around, you can grab a small brass ring and try to throw it into a giant clown's mouth. If you succeed, a horn sounds and the clown's eyes light up. It's a very fun twist on a childhood ride :)
All in all, it was a great day!