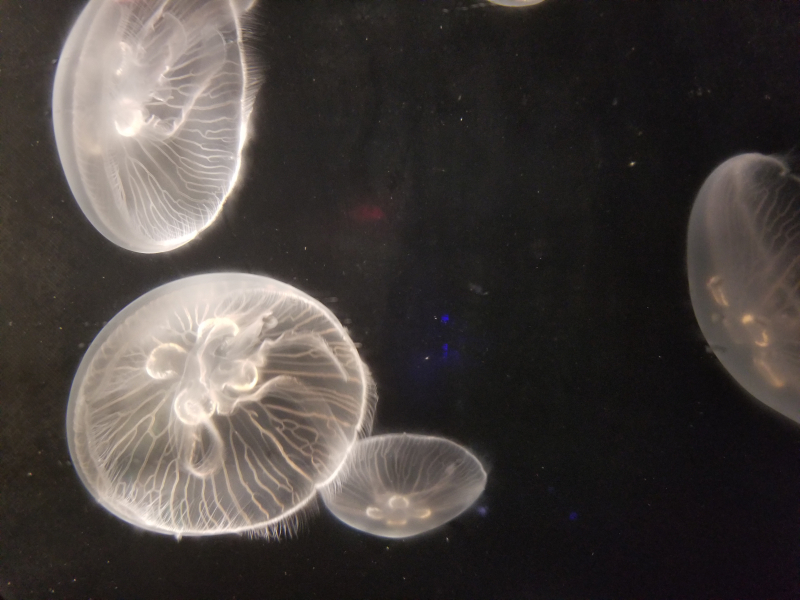 A Must Sea Experience

Ahoy! I just went to visit the New England Aquarium and of my Boston adventures thus far, it is definitely a highlight! Would highly recommend to anyone in the region or visiting the region, although it was kind of expensive (around $30 for a day pass). The aquarium sits right on the edge of the bay near Boston’s north end and was fairly easy to get to using the redline. Getting back however was NOT fun because while I had been walking around inside the museum, a classic northeastern downpour began outside. I’m talking a heavy, steady downpour that lasted for hours and left puddles the size of small ponds! Just a word of advice to anyone planning touristy day trips: always check the weather and be prepared.

The New England Aquarium is quite large, housing tropical fish, freshwater fish, several sea turtles, small sharks, stingrays, penguins, and seals! The shark and stingray touch exhibit was pretty neat because you can actually stick your hand in and feel the tops of the stingrays as they swim by. Stingrays have quite a slimy texture and I definitely needed to wash my hands afterwards, but I do not regret the experience one bit! Stingrays are actually very docile, graceful creatures; however seeing the underside of one is kind of disturbing. Their mouths gape open like someone gasping for air, and they have tiny, beady eyes. For those of you familiar with Pokémon, picture Ditto with a surprised expression.

An enormous, four-story tank occupies the center of the aquarium with a spiral walkway around it, allowing visitors to watch from all angles as the fish swim around and around. This tank also contains two sea turtles and three sharks (or at least it did on the day I visited). Sea turtles by the way are absolutely massive! On each floor around the tank, various other exhibits were on display, my favorite of which were the seahorses and the jellyfish (shown below). As a mediocre artist, I particularly enjoyed taking pictures of the jellyfish. I plan on using some of the photos for future sketches and possibly a watercolor painting, but I know how difficult it is to create a see-through effect to capture the translucent exterior of the jellyfish. On a side note, I’m not sure why, but the expansion-contraction movement that jellyfish use to propel themselves forward is really interesting to watch.

My absolute favorite part of the aquarium was the penguin exhibit. Penguins are just so awkward on land, waddling around in circles. When I saw one laying down on a rock, I swore it looked like a duck. Fun fact: penguins have knees! Their femurs are just so short and almost always parallel to the ground, basically in a squatting position, that it is hard to tell. But when in the water, penguins transform into these elegant, graceful torpedoes, darting around here and there. I honestly, could’ve just watched the penguins for hours, but I eventually moved on so I could see all the exhibits. Overall, a great way to spend my Saturday and worth the price.