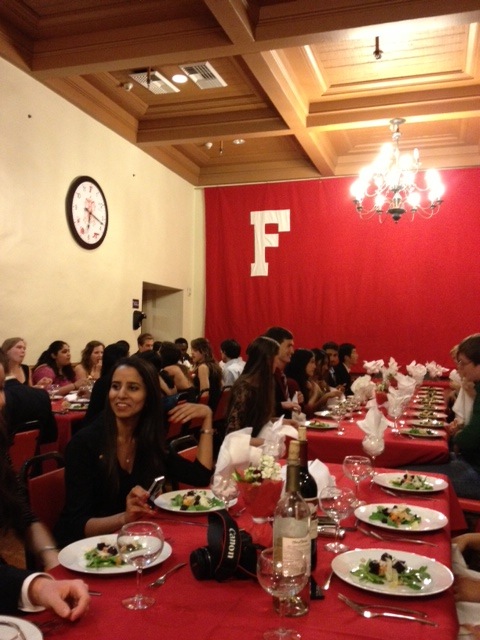 A picture's worth a thousand words?

Over the past couple of months, I’ve accumulated a couple of photos on my phone from a range of events. And here they are! Every term each house has formal dinner. It’s like a house dinner, but we typicallydress up and the food is much better than that from usual dinner.

Here’s some of the frosh class! After formal dinner, soc (short for social) team, put on a karoake night! These photos come with a little more background. This past term elections for house positions were held. It’s a little different for each house, but we have our President, VP, Secretary, Treasurer, Librarian, Historian, BoC and Crc reps. We also pick new ath and soc teams. Each team is made up of two leaders and four new frosh. Ath team handles the athletic events such as Interhouse sports where we compete against other houses, and soc team organizes the social events. There is at least one each week, and they typically happen on weekends, whereas ath events are spread out throughout the course of the week. So, bringing it back to karoake night, this was my event to plan as a new member of soc team. We were planning on going ice skating at the local rink, but they were hosting some sort of adult figure skating competition for the whole weekend, so I had to figure something else out. The event had a great turnout, and the singing continued way into the night. I was surprised that something as simple as a mic and speakers hooked up to a laptop where we looked up karoake music videos from YouTube from could make so much fun. Well, snacks were provided too.

A wonderful solo performance of With Arms Wide Open by Creed.

A bunch of enthusiastic karaoke-ers.

This is before OPI, what we call Venerable Interhouse. It was Harry Potter themed, and we attempted to dress up as Fluffy, the three-headed dog from the book/movie. A lot of people thought we were cats, but we did our best to look like the dog. Venerable built Hogwarts in their courtyard and had Harry Potter themed snacks and other things. Other blogs have more about OPI; unfortunately I didn’t get any pictures of that.

The weekend coming up is Lloyd Interhouse. The theme is Up, and I’ll be sure to get a couple photos since we are dressing up for that as well. Ice skating is also going to be this weekend! Soc team has a budget which we use to subsidize cost for ice time and rental skates for example, and gas for the drivers. Even though I will be sleeping less now that Spring Break is over, it’s so exciting to be back in the business of college!