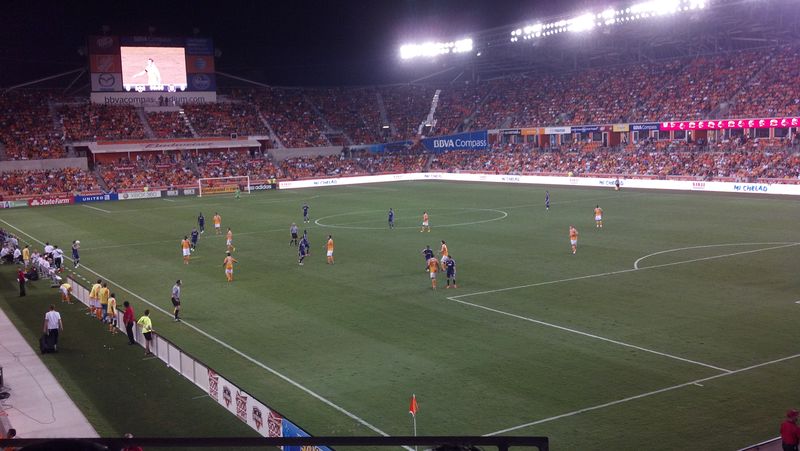 A Visit from Dad!

In the last week of my time in Houston, my Dad flew down from Ohio to stay with my grandmother (his mother-in-law) and me for a few days. It was a good visit and my dad was able to help my grandmother with some things she needed fixed around the house. << That makes it sound like I’m not capable of helping my grandmother fix things, but she mostly just waited until he got there to point out the broken drawers and dead light bulbs, etc. That being said, I tried to help her open an empty pepper mill to refill it for probably 20 minutes before giving up, and my dad opened it within 20 seconds of having it in his hands. We had 3 nights of delicious food… strangely, none of which was . My grandmother is a great cook, but there were some Texas specialties that we wanted to go to because my dad really enjoys them every time he comes.

1) Barbeque! - Goode Co. Barbeque is the most delicious barbeque I’ve ever had. I got a plate of beef brisket slathered in BBQ sauce with a fully loaded baked potato side. The meal gets topped off with jalapeno cheese bread - soft and flavorful. My dad really loved the ribs he got too, so it was a win all the way around.

2) Mesquite Quail - My dad loved this the last time he came down to Houston, so we were sure to return. The quail is extremely tasty because of the delicious sauce it’s cooked/smoked/grilled/? in (we think it had some tomato and onion base to it…). My grandmother comes once a month with a friend in the winter to get this quail at the Goode Co. Taqueria.

3) Seafood Gumbo - You can hear more about this amazing seafood restaurant in one of my previous posts (here), but the moral of the story is that the crab, shrimp, and oyster gumbo is delicious.

Yeah, it feels kind of lame that we ate out for three nights when my dad was here (and all three were Goode Co. restaurants…) but the food was so good that I’m willing to forget that.

On Sunday, we went to an MLS Houston Dynamo game vs the Columbus Crew. My grandmother hadn’t been to a game in the new stadium yet, and watches the Dynamo a lot on TV, so she really enjoyed going to the game. However, after about 10 minutes, she was cheering for the Columbus Crew because they were “really fast and good”. Luckily the game ended in a 2-2 tie, so there was lots of action and no one’s feelings got hurt…

It was great to have my dad visit in Houston, and he will be back to see me at Tech during the school year too! Sarah