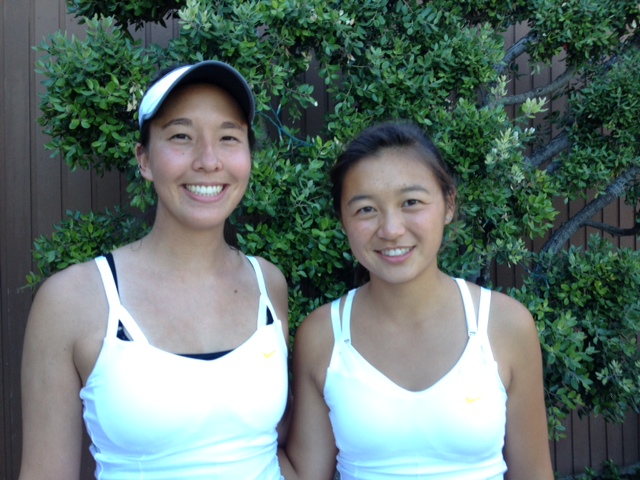 A couple weekends ago, we drove to the Ventura area to play in an invitational tennis tournament. It was difficult to finish up all my sets to leave Wednesday night, but the trip was 100% worth it! From the women’s team, Rebs and I played in the tournament, and the six players from the men’s starting lineup also came.

We met up with a mother of a tennis alum who is a member of the club where we played. She was so nice! She cheered for us during our matches and just hung out with us when we weren’t playing. Also, she brought us this giant box of strawberries along with other yummy snacks! The club had a cardboard box of oranges and clementines for us to eat. Apparently, both strawberries and oranges grow locally, and I ate a bajillion of them this trip.

Rebs and I won our singles and doubles matches the first day, and sort of as a prize, our coach took us paddle boarding that afternoon! Just a five minutes drive from our hotel, we reached the beach. Neither of us had paddle boarded before, so we started off kneeling on the board (the lower center of gravity made it harder to fall).

Here’s the beach! The harbor we explored is to the right of the photo, where you can kind of see the boats. There was a harbor nearby so we decided to check it out.When we paddled into the harbor, I imagine what we saw as the Americanized version of Venice. The water was lined with houses that each had their own mini-pier where their boat/yacht was parked. The water was so still that Rebs saw fish swim by, but I wasn’t paying enough attention to see them. The still water also let us stand up on the boards. The boats were all different colors had their names painted onto their sides. And when the crew boats weren’t nearby (and we weren’t talking), it was so quiet, with only the sound of our paddles hitting the water.

The sun was setting when we decided to head back; we were also tired from standing and paddling. We paddled out of the harbor and small waves starting hitting the boards but we were more experienced in paddle-boating that we could still stand, or so we thought. Out of the corner of my eye, I was just able to see Rebs as she fell off her board. Splash! I was laughing so hard I almost fell of my board too. Everything was fine because we were pretty close to shore and went back to the hotel to shower after locking up the boards. Dinner was delicious local fish at a nearby restaurant. Additionally, they had a chocolate cake that I ordered. Yummy! The next day, we didn’t do as well as hoped for, losing in doubles and singles. The tournament is single elimination, and generally your opponents get better as you go. But oh well, there’s always next year!I took a bunch of random photos that aren’t related to what I wrote about but wanted to show you anyway.

Bird tracks from the beach. We think they’re sea gulls, but I don’t actually know.

And lastly palm trees I took while on the road. Till next time, Monica