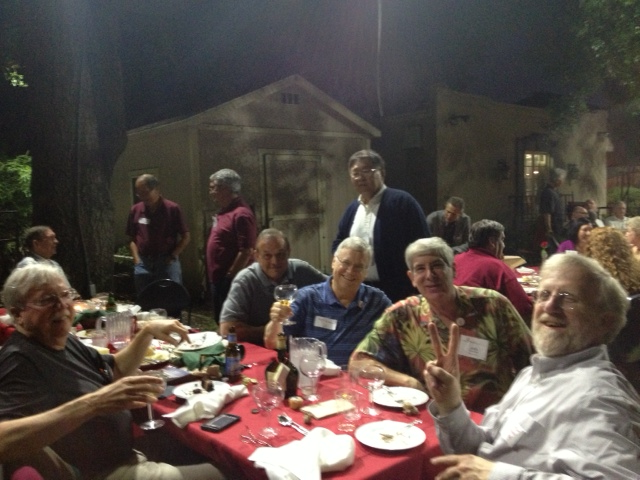 Alumni Weekend - a trip into the past

For Alumni Weekend, our house organized a dinner with Tom Mannion. The food was delicious, as always and I finally got to meet the alums that graduated a couple years ago I always hear about from the upperclassmen. But of everything, I found the older alums the most interesting. Back then, wrestling against other houses in the dining hall was not a common experience.

They said that one time, a guy from another house did something bad to Fleming (I don’t remember what it was), and then as a consequence, a couple Flems took him off-campus and shaved his head. The Flems only had a couple weeks left before graduating so they didn’t get expelled, but were punished accordingly. And now they have a song written about them, calling them the three barbers. We all thought this was hilarious, and I personally can’t imagine something like that happening now. The houses aren’t as segregated as they were before, which makes for less exciting stories but I think it’s better this way.

There was another story about how there was an old truck or something at frosh orientation camp that they were told over and over again not to touch. So, one night, they stacked picnic tables together and moved the vehicle onto the roof of one of the buildings. In the morning, the tables had all been put back and people were scratching their heads because they could not figure out how something that big got onto the roof.

The emotions that came through as they told these stories are not something I can replicate.My retelling of these stories is nowhere close to as well as the alums told them, but hopefully you got something out of it.

But back to the dinner, the current undergrads got a taste of what it was like in the past. There was a group of alums that graduated in ‘68, before Caltech began accepting women. So Fleming has this tradition of throwing folded up napkins at dinner, so a lot of us are doing that. Then, the class of ‘68 didn’t think that was enough, and so they started throwing food! All of us are dressed up, and there are green beans, cupcakes, and other foods flying through the air. I couldn’t help but laugh as I tried to retaliate. And at the end of dinner, I asked to take a picture of them and they gladly agreed: Apparently when the women starting coming here, the men got a lot more polite; I imagine it as practically chaos before then. More pictures from the dinner:

I really enjoyed talking to the alums and hearing their stories. I wonder what I’ll remember from my experience here years from now. The house traditions we have now were present half a century ago, which I was quite impressed with. A lot of alums were even older than my parents! I wonder where I’ll be when I’m that age, but I definitely plan on coming back to visit.