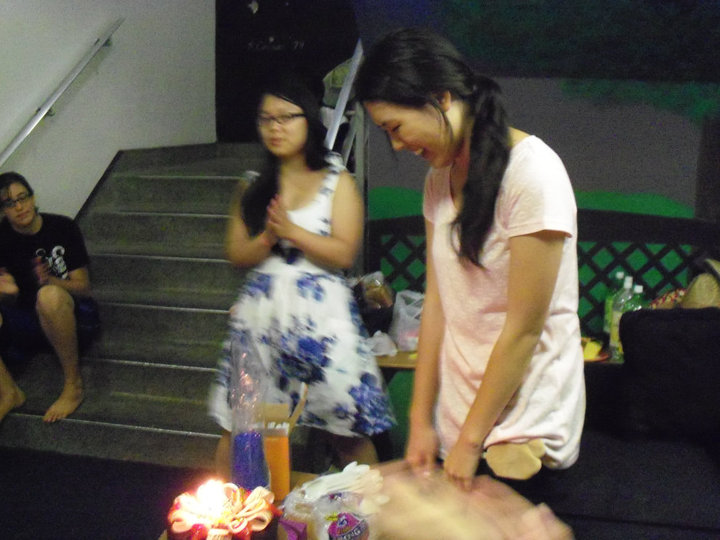 An abundance of sugar!

This past weekend I saw another year come and go as I turned another year older. Though most of my friends had already finished SURF and had left, I still had plenty of fun spending it with those still around and pigging out. And also because…

Remember how I said one of the Venerable traditions is to celebrate house member’s birthday in our common area? Well, this past Friday, the last day of SURF for most of SURFers, my friends decided to surprise me with an early birthday celebration. I was packing up all my things to move the next day and was actually about to go to lab to stop a gel when one of my friends came knocking at the door, panting and out of breath, and saying that there was something I needed to see. What a surprise I got when I saw everyone standing around this cake:

Mm… this cake was chocolate with blueberry cream and lots of chocolate and strawberries on the top. And apparently my friends thought that just one cake wasn’t enough because…

They bought me a second one. The other one was from a little Japanese bakery called Patisserie Chantilly all the way in Lomita (a good 30 minutes drive from campus). It was a strawberry shortcake with tons of fruit on the top and achocolatyhappy birthday wish stenciled on the top in Japanese. Unfortunately, I was only able to cut myself a slice (my friends insisted) before running off to lab. When I got back, both of them were all eaten up!

And last but not least, I got a beautiful bouquet of flowers.They were super bright and cheerful and gave off a very nice smell, which was a bonus since the new room we moved into smelled rather musty and a bit like it hadn’t been cleaned or air freshened for awhile what with two guys living in it previously. I’m glad to say that thanks to the flowers, half a can of air freshener and a plug in air freshener, it finally smells nice and clean!

And of course my roommate thought that two birthday cakes wasn’t enough to satisfy my sweet tooth. She was worried that I wouldn’t be able to eat much of my birthday cake (a prediction which came true thanks to lab haha) and so she bought me these three smaller desserts. The one of the left is a strawberry mousse tart, then a matcha (green tea) roll cake, and a chocolate cake. They were the perfect pick-me-ups after a long day of moving in (which also involved them getting jostled in our mini-fridge as my roommate and I were too lazy to take out any of the food from it and just tried to move it as is. And by my roommate and I, I mean three strong guys).

But, now fast-forwardingto my real birthday. Missing home and Japan, a couple of friends took me to this one casual Japanese restaurant in San Gabriel (just 5 minutes away from Caltech). While all of them had ramen, I opted instead for curry! But not just any kind of curry. Special Japanese curry with friend pork cutlet and Japanese-style pickles and miso soup on the side. Combine that with milk tea and you get a delicious birthday lunch!!

As I was eating, one of my close friends told me that they were treating me to lunch since it was my birthday and so prompted this response. Of course he was joking… I think. Actually I’m pretty sure it was just because he was trying to dodge the camera. After we were all done pigging out on good food and boba, he dished out some extra money for my portion (of course with some playful grumbling and dramatics), only to realize he didn’t have enough to pay for his own meal. Oops!!

The perfect way to end the day? Coconut deep-friend ice cream! I had this at a Thai restaurant actually which was quite surprising to me. I didn’t know the Thai liked deep-fried ice cream… But anyways, it was delicious! And very fatty feeling :) But, just one last week of SURF left and still a lot more protein to express and purify. And packing as well! Till next time