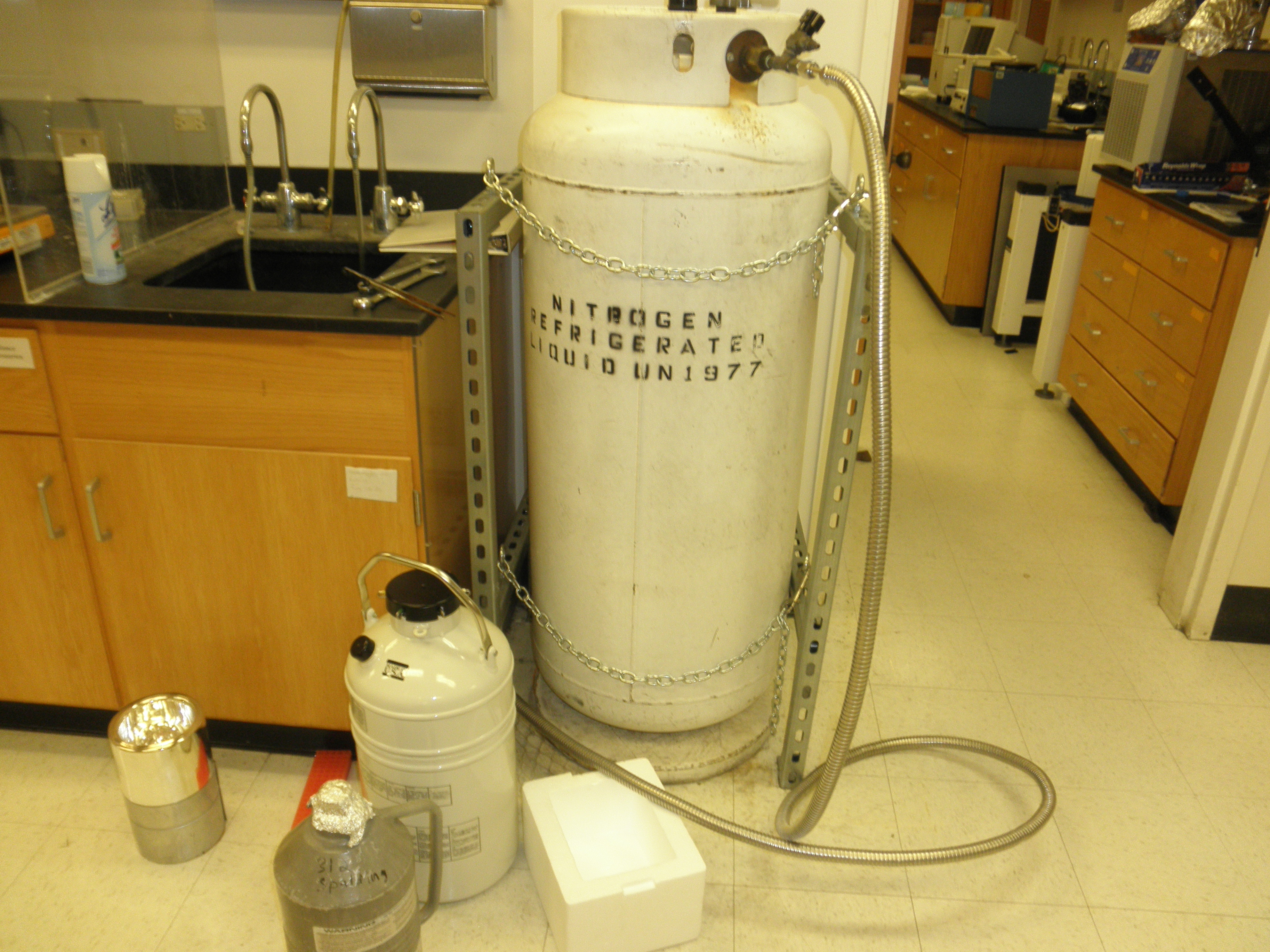 After a fun weekend, it was back to work. Finally it was time to see whether my purification process worked.. fingers crossed! After two weeks of alternating hot and cold centrifuge cycles, a three day process of dialyzing the liquid to rid it of any unnecessary salts, I finished off my purification with a process called “diapolizing” (not sure if that’s how it’s spelled but it’s something along those lines).

First, we freeze the liquid containing the protein using liquid nitrogen. As you can see, the liquid nitrogen is contained in this very heavy-duty container complete with chains, warnings, and other such precautions. It also makes this horribly loud, obnoxious noise when turned on. My mentor grinned at my grimace saying it would be my turn next time to use it. Definitely not looking forward to that….

We then put the bottles in another, seal tight jar and hooked it up to this machine. This machine creates a vacuum inside the jar in order to put the samples inside under extreme pressure. The high pressure then causes the frozen samples inside to go straight from the solid state to the gas state in a process called sublimation. In this way, the protein will be precipitated out of solution and ready to use.

Here’s how the samples look. As you can see already, there is some powdery white protein precipitating already. Also, you can see how we had to replace the caps of the bottles with very porous paper as to let the water vapor escape out of the bottle. We also wrapped the whole jar with foil as to shield the protein from the light. I asked my mentor why this was so important since our protein isn’t photochemically active but he gave me a rather vague answer about it being a precaution. I guess it’s better to be safer than sorry since it took nearly a month to complete the purification of this protein.

And here it is – the final product. All 72.6 mg of protein. All this from a whopping 10 liters of culture. Because of our low yield – which was expected but still not a pleasant reality to stomach – I’m doing yet another expression this week. More 10 liters of culture and smelly bacteria.. yay!! However, since this is already my third expression I will be running, my mentor told me that it was ready to start something new. Starting from next week, not only will I be purifying the protein I am preparing right now, I will also start cross-linking our proteins with a chemical called bis(sulfosuccinimidyl) suberate or BS3 for short. By cross-linking the proteins we are able to create more viable forms of biomaterials that have properties similar to the tissue we plan to implant them into. Sounds like fun! Now that I’ll have even more work to do while waiting for the centrifuge to run for two hours that means….

Less time spent on the computer. Since I have a desk in the lab itself, I would always go check my e-mail or write parts of this blog during my long waiting periods.

Or, I would often go to the Tirrell lab’s meeting room which is just down the hall to grab some water and talk with the other researchers who were also on break. One nice thing about researching in biology is that there’s always very long waiting periods to use to take a break. But, then again, a down side to that means in order to accomplish a decent amount of work in a day, I have to go in early and stay until fairly late.

And so it’s back to work. Til next time!!