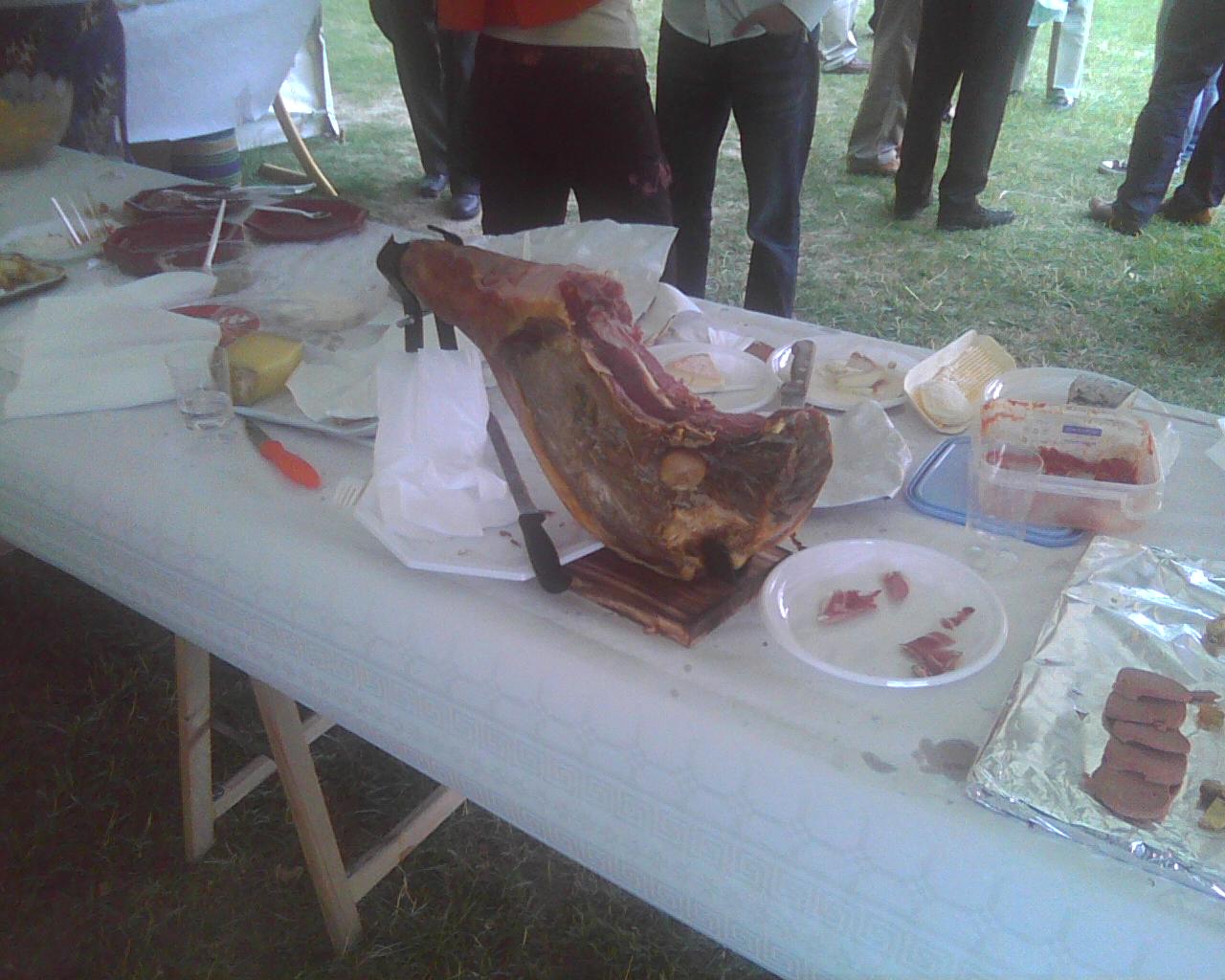 Hey guys! I know it’s been a while (almost a week!) since I put something up and that’s just because I’ve been UBER BUSY @[email protected] :D So let me begin with a quick little tidbit about our lab BBQ; this happens once every year for the CMAP lab (CMAP stands for (in French) the Center for Applied Math). This BBQ was next to the lake that is on the Ecole Polytechnique campus and had so much food I had no idea where to start. People were encouraged to bring something to share (and I really wanted to help out) but there is no supermarket on campus at Ecole Polytechnique; not even a little convenience store! And it’s not like one can just go to a grocer next door. Nope. To get groceries you have to first walk to the edge of campus, then walk down about 300 steps and the go a distance to find a market in Palaiseau (which is the town Ecole Polytechnique is in) and then you have to march up those 300 stairs again… Obviously I was not going to have time or energy to do so! (BTW what is it with me and gawd-awful inclines? Last year in Hong Kong I lived at the bottom of one of the most tortuous hills you could ever imagine… And I ran in a nature preserve that was like a collection of the meanest mountains you’d ever run on!)

Well Friday was extremely busy… Here was the schedule for the day: 1) wake up a bit early and pack 2) get some documents off the internet to give to the doctor 3) go to a doctor’s appointment at the school to make sure I’m not going to drop dead and thus be a liability for them 4) meet with my mentor briefly (this never happened; I had way too much stuff to do) 5) go to the housing office and give them my inventory form 6) go to the international student cocktail party 7) leave the party a bit early, head home, finish up packing and get on the train to Gare du Nord 8) take the train from Gare du Nord to London 9) meet my friend Lisa and see platform 9 and 3/4 :D 10) clean up and head out for a night of fun on the town…. TROP DE CHOSES A FAIRE! So let me kind of just highlight a few of those points there :)The doctor was the sweetest lady ever; she was so happy that I could “speak” French :) As for actually getting any work done that day, well it didn’t really happen! Oh well! The international student cocktail party was great: highlights included meeting a girl who had lived in Dabney Hovse the summer before :D as well as meeting a high school friend of my roommate for next year! Academia can be so cool for these reasons! I met a whole bunch of other people from all over the place; Singapore, the US, India etc. etc. The only bad thing was that I got lost in the process of trying the find the place, so I walked in five minutes late and everyone stared at me for a second!!! How embarrassing :P

Let me say that although I wasn’t a huge fan of metro lines randomly going out of service throughout the weekend, I loved the fact that London has many buses going 24/7, so you’re never stranded anywhere, no matter what time it is!

The next day was the beginning of the more “touristy” stuff; we first went to Buckingham Palace and saw a ceremony that they do every morning there (tourists everywhere of course)!

Oh and I also finally found a street performer that was worth my pounds! The stuff he did was really cool! I don’t know if it has a name or not, but he would hold like 3 glass orbs and move his body to keep them balanced; but the way he did it made it look as if the orbs were stationary and he was actually moving around them… Believe me, it was neat!

Westminster had some pretty intricate architecture…

Well that was London, now moving on to other awesome things….

That weekend on the way to the Gare du Nord in Paris, I’m sure my camera was stolen :( not awesome. BUT my parents had it insured for $400. AWESOME! So I’m in the process of figuring that out. Therefore, right now the only photographic documentation of my adventures is through the lenses of others’ cameras… Or my crappy camera phone. not awesome.

When I got back from London, I had a rough week. I began to get sick :( and having no camera while in Europe began to freak me out! I had distracted myself from these awful ideas on the train home from London with some musical inspiration: I made a little dance remix of one of my favorite Darin songs…

Then Monday it was back to perfecting the second order schemes. Now for some reason, everything is fine (as in the code is basically doing what it’s supposed to do) except that there’s one correlation in the data that does not exist, and it defeats the purpose of the entire conversion of the code from first order to second order. I could talk about it here and paraphrase my progress report that I recently submitted, but instead I will just let you follow this link to the report to better understand (and btw because the report was very much oriented toward my mentor and me, I refer the reader a lot to outside sources; if you really want to know about what’s important right now, you should just read the last two sections or so).

Yesterday was Friday, and I got off to a slow start in the morning because I went to the nearby RER train station to see if I could figure out my camera situation. Afterward I had lunch at this little restaurant in Palaiseau (the town in which Ecole Polytechnique lies). That lunch was the BEST 10 euros I have spent ever, probably because it was AMAZING! For 10 euros I got a little sausage appetizer which was basically like a bunch of little salami slices. Then the main course was a HUGE salad that was a ham salad. Now when I first read it, I thought it sounded good; well it turns out the ham in the salad was cured so it was actually PROSCIUTTO, which is probably my most favorite thing to eat ever (besides maybe gruyere cheese, but that’s a different story!) So yeah the salad was a beautiful bed of lettuce leaves covered in dijon mustard with heaps of prosciutto on top. Then surrounding the entire thing in a little circle, much like the spectators at a circular stadium, were big melon slices along with occasional tomatoes and cucumbers. This salad was epic. I asked them which days they serve it so I can share it with someone one of these days! :P And the dessert was gateau a la passion: PASSION FRUIT CAKE! And i had this feeling it would taste very artificial and ok but not delicious. HOLY TOLITO was I wrong! This cake was amazing! I can’t even talk about it because my words do it absolutely no justice! ;-) OK Well today is Saturday, and is the something-th anniversary of when the US got its independence. So the international students are having another picnic (at Ecole Polytechnique, this time) in celebration of AWESOMENESS in general.

Coming up: Lady Gaga concert in Paris, figuring out what camera to buy, moving on to the next part of my project, seeing Ice Age 3 (gotta find someone to see it with!), buying Cascada’s new album when it comes out next week, and recounting the tales of seeing random people in Europe with whom I have connections, or even have met before! :) Always, Anton