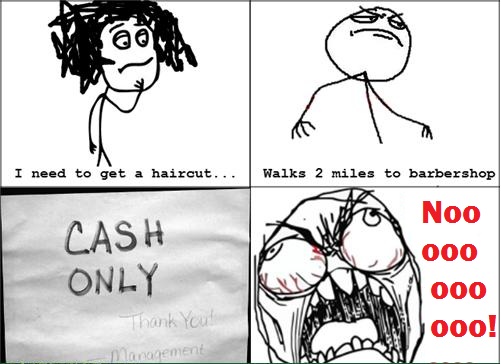 Hey everyone! I am finally back again after my unintended 2 week hiatus from blogging. Anyway, there’s a lot to blog about, but first, let’s talk about the weekend. Have you had a good weekend? I hope so! I had a great one as well and I learned two things as well.

#1: Always bring cash with you because you never know when you’ll need it!

#2: Never put a cup of liquid like milk near electronics! I got lucky this time!

I decided to get a haircut on Saturday, but the problem was the barber I went to only accepted cash, so after I arrived, I found that I was short $4, and I had to walk all the way back to Tech to use the ATM since there were none nearby just so I can get $4. Unfortunately, I don’t carry debit, so I couldn’t get cash back at the stores either. Moral of the story is for me to carry a modest amount of cash with me at all times.

After I got back from the barber, I went grocery shopping with my friend Elise and bought some milk. I poured a cup of milk next to this laptop I’m typing on, and accidentally spilled the entire cup of milk on the laptop keyboard. All the liquid seeped into the keys before I got to wiping it up with a paper towel. Fortunately the laptop keyboard was unaffected. Unfortunately, I wasn’t thinking and forgot to check where the milk had gone. Of course, it had to seep through the keyboard and fall out on the other side. So, the next morning when I went to remove the laptop from the desk, I found a puddle of milk underneath it, and you can just imagine how dumb I felt! Anyway, there’s a milk stain on the bottom of my laptop, but oh well, it still works so I can’t complain. Moral of the story is for me to not put cups of liquid near the laptop or any other electronics for that matter.

Now time to catch up!

This symposium took place exactly one month ago from Saturday, July 16-Monday, July 18, 2011. During the symposium, 258 Amgen Scholars from across the U.S. had the opportunity to discuss their summer research projects, learn more about biotechnology and scientific careers, and hear firsthand from industry and academic scientists. A similar symposium will be held in September at University of Cambridge for the European Amgen Scholars. More information here: https://www.amgen.com/media/scholars_prepare_to_shape_future.html#pic

There are many highlights to this symposium, which I will go into detail in the next blog post. However, I’ve provided many photos for you in this blog post, which you can find below. However, before we get to that, let me tell you a project the Caltech Amgen scholars had completed just a week ago.

The idea began during the 2nd week of the program. A couple of us, especially Megan and Emily, wanted to do a parody music video about chemistry. After a couple weeks, I located all the material that we would need, and we created this music parody based off Michael Buble’s song “Haven’t Met You Yet” except this time, it is “Just Haven’t Made You Yet”!

Hope you guys enjoy this music video! We spent a long time making it, but we had a lot of fun in the process! =D

Now, onward to the pictures and see you next time!