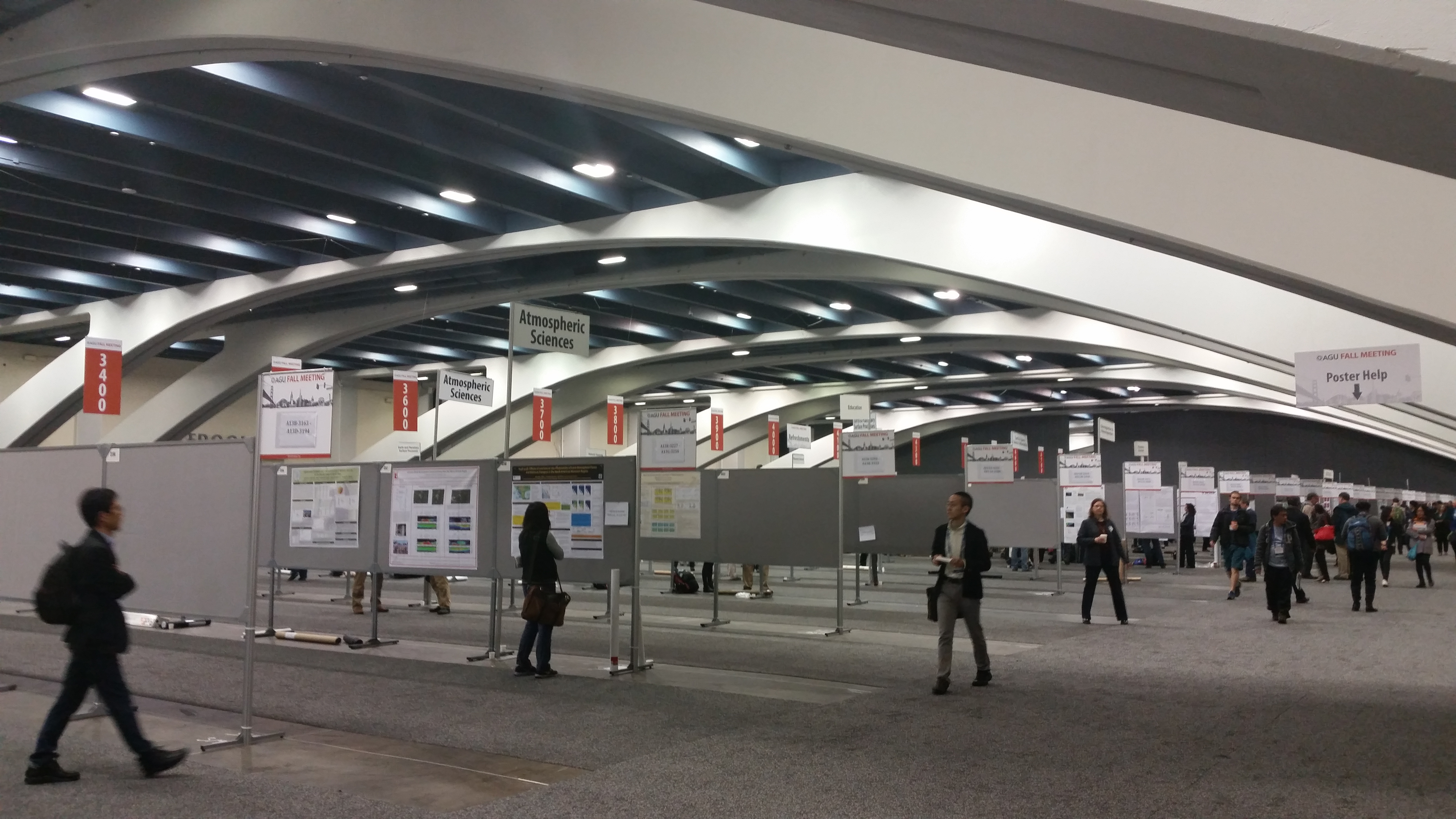 At the end of my 2014 SURF, my mentor told me that she had submitted our project abstract to the American Geophysics Union (AGU) 2014 Fall Meeting and that should I find funding I should feel welcome to go. I ended up applying for Caltech’s Hausner for what turned out to be a three night funded trip to San Francisco! I just finished up the trip, my first conference, and while it was admittedly a geophysics conference for someone certainly more interested in the harder fields of physics, it gave me a terrific understanding of what academic life could possibly look like.

My arrival on Sunday evening was uneventful, just in time to pick up my badge but not much else. I was forced to purchase a cheaper, farther hotel both because I registered late and because, not wanting to exceed my proposed sum, I couldn’t find a roommate and so had to shoulder the cost of a single room alone. I thus stayed home Sunday night, both because I didn’t know anybody to go out with and because France-California is a 9 hour jet lag, when I only had one night in Atlanta.

Monday morning I expectedly woke up at 5AM, and did some work while I waited for the time to go to the conference came. I downloaded the app for the conference, what they recommended, and found out that there 23000 abstracts submitted for a total of 25000 projected attendees over all 5 days. This still didn’t mean much to me at the time, since I didn’t think most of it would interest me. I was soon to be proven wrong though.The amazing thing about these conferences is the sheer scope of them, how much good research and how many brilliant people are crammed into a single room. It almost osmoses; walking through the rows and rows of posters, problems and solutions started just springing into my head, without any connection to what I was seeing before me.

But also, it gave me a new appreciation for just how much physics there is out there to do. Physics is a lot more than boundary value problems for electromagnetism, it’s a lot more than bashing through linear algebra or infinities for quantum field theory. It’s fundamentally about trying to understand something complicated by modeling it as something simpler that we do understand, then figuring out the differences so we can understand better. And in that vein, the sheer amount of atmospheric sciences, seismology and solar physics that was crammed into the three venues was astounding. It really made me personally appreciate how much data there is in the world to be analysed by people who, while ostensibly no longer theoretical physicists, are doing problems equally interesting using techniques equally enchanting.

While I spent most of the first day just looking around at posters without talking to the people and going to talks, I met up with my SURF mentor the second day. She was the presenter and I was only second author, and much progress was made since I left for France from my SURF, but she still let me take over the second half of a few of the passersby and even gave me a full half-hour with the poster myself while she fetched her laptop! It was noticably more social presenting, as I even got to meet my neighbor, and many people were very encouraging to this little undergraduate trying to make his way at a conference of 25000 accomplished scientists.

Ultimately though, going to this conference gave me an idea of what a conference feels like, and while to me right now it feels like a web of superficial questions will one day be a great chance to understand what research similar to my own is going on, and possibly even lift a stagnation from my research. I can easily see the appeal of this sort of gathering if I were doing more of this academia stuff, and I will keep this in mind as I move into decision-making time between my two majors.Side note, I heard a lot of French there and even saw a poster from Ecole Polytechnique! It made me very happy to see :)