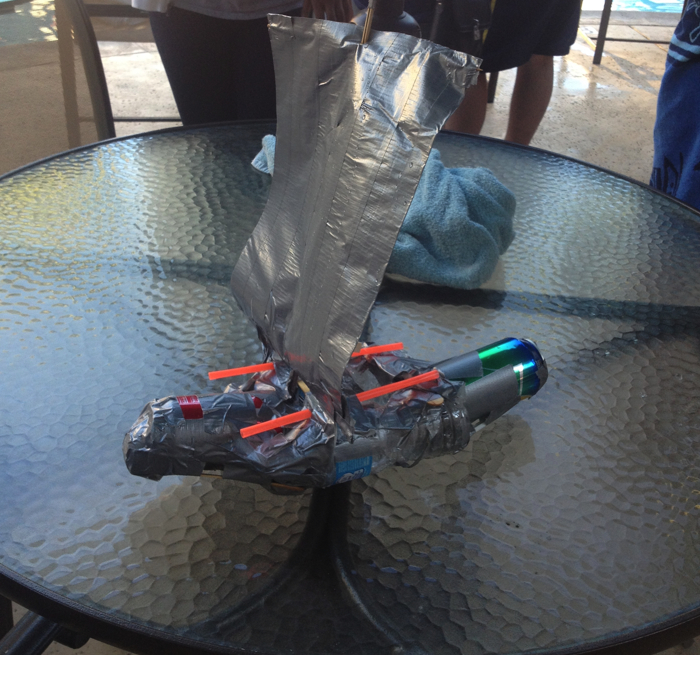 Hey there! I’m Anusha, a freshman in Blacker House. I am thinking about majoring in Electrical Engineering, and I say “thinking” because we only have to declare a major third term. So a little about me:

I’m from the good ol’ east coast, land of the blue crabs. If you guessed Maryland,you guessed right! In fact, Marylanders are so proud of their crabs that one of my friends back home gave me Old Bay seasoning as a birthday gift, the irony being that I’m a vegetarian (but yes, it can be used for more than just crabs). It’s been quite a change in weather coming here, and when I came back from winter break, I experienced over a 40 degree temperature rise (it is REALLY hot here).

There are so many things to do here in Pasadena and on campus itself. Really. There is always something going on, whether you want a fun excursion or a late-night board game competition. Academics are important, but it is just as necessary to step back and let the right side of your brain take over for a while. As a tribute to this, I’m going to tell you all about my first term here at Tech and ten of its highlights, in no particular order whatsoever.

** **After 12 hours in transit, including one two-turned-four hour layover in San Francisco, I finally made it to Pasadena! The first Monday of orientation, the frosh were herded into buses and we made our way to Ventura, where Frosh Camp was held! That’s right, my Caltech life started in a Marriott at Ventura Beach about an hour away from campus. We were all put into country groups, and we spent a lot of time doing activities during camp with the people in this group. In fact, Carly, my roommate, was in the same country group as me! During this time, we were given the chance to spend time at the beach, go on a hike with Professor Asimow as he explained a lot of the really interesting phenomena on the trail, and we had a chance to learn about a lot of the Core classes from the professors themselves!

While we were there, there was a boat competition between the country groups. The task was to build a boat that could travel a certain distance in the Marriott’s pool. Our country group, Belgium, built a sailboat, and we won! Here’s a picture of the final product:

Here at Caltech, we have a thing called Rotation. To understand Rotation, you really have to believe that Caltech is the equivalent of Hogwarts (read: it’s magical). For the first two-ish weeks of school, we live in a temporary room with a temporary roommate, and we go to dinners, desserts, and special events at each house. Then, at the end, we rank the houses, and through some mysterious process, we are sorted (read: the sorting house decides our fate) into a house.

Where did I end up? Blacker House! After a term here, I absolutely love it, but you’ll hear most people say that about their own house. I live in a room called The Shire, and we have a half loft. Carly sleeps under the loft on a mattress on the floor, and I have a desk-bed (a bunk bed with the bottom mattress removed). This way, we can have the loft to lounge around! The picture to the left is of me on our loft.

So, here at Tech, freshmen are on pass/fail for the first two terms, meaning we have no GPA until third term. Some classes give shadow grades, but those aren’t of much significance after the term ends. Being on Pass/Fail is AWESOME. People say it gives you a chance to try a bunch of different things and see what you have time for. Personally, though, I don’t think you should take on too much first term. I joined Dhamaka, a dance team, joined the Academics and Research Committee (ARC), played flute in a chamber group, and started doing research in a lab here on campus. Outside of that, I participated in house events and focused on schoolwork because I knew I couldn’t take on more than that. What Pass/Fail really allowed me to do was realize that if I didn’t do as well as I had hoped, everything would be okay. And that gave me a chance to figure out how I could do college better, and that has been working out great for me.

Possibly one of the biggest benefits of going to such a small school is the immense number of opportunities available to network with professors. In fact, my physics recitation TA was Professor Frautschi, a Professor Emeritus here at Caltech. Despite being one of the founders of modern string theory, it appears he likes to spend four hours a week TAing Ph1a. It’s things like this that make Caltech such an incredible place to learn.

One of the nicer aspects of a 230-some freshman class is that professors sometimes take students to lunch at the Athenaeum, the equivalent of an on-campus country club. There, I’ve had lunch with Professor Frautschi, Professor Lewis (Ch1a), Mike Vanier (CS1), and Professor Nets Katz (Ma1a). I’ve learned about Prof. Frautschi’s take on living in various parts of the world, Prof. Lewis’s solar energy research, and some other pretty awe-inspiring things.

** **We call our “dorms” houses for a reason – Blacker really is my home away from home. While many students go home for Thanksgiving, I stayed on campus because break is only four days and it didn’t make sense to spend two of those days flying home and back. On Thursday, after waking up around noon, a bunch of the frosh spent the day making pound cake, frosting, baked potatoes, and roasted potatoes. Quite a few people stay on campus, so all of the ovens were full for the majority of the day. So much food!

After only one term, I’ve come to the conclusion that I really, really love Caltech. I love the people, I love the classes, I love the culture. Anyway, I’m now in my sweats and under a blanket, so it looks like I should sleep (what’s that again?). Look out for the second installment of my Fall Term adventures!