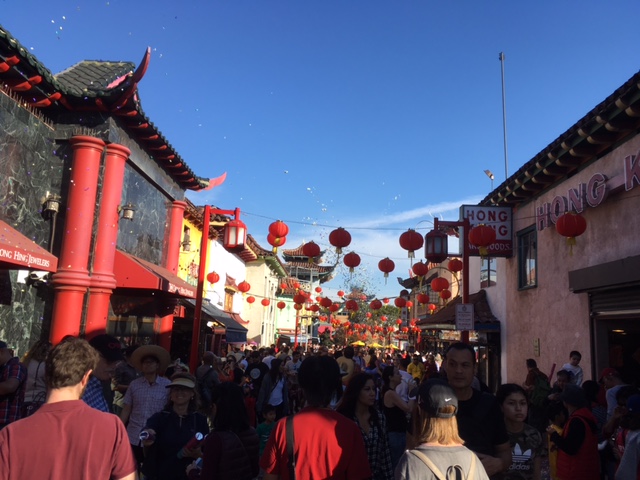 For Chinese New Year, all of the Chinatowns that I know of put on a parade at some point in time. I heard from my family that the parade in Chicago was actually on a Monday a little farther into the new year, but in LA, it was on the first weekend. I went to see the parade that day (not very early admittedly); from what I saw, it had a lot of other ethnic groups marching as well, including dancers, cowboys, etc. as well as marching bands from a lot of high schools around the area.

I didn’t actually spend a lot of time watching the parade, instead walking around Chinatown, where a ton of people were setting off poppers that spewed large amounts of confetti. The whole ground was covered because of the sheer number of poppers that were set off. I also bought some poppers; I enjoy the smaller gunpowder poppers, with packages only as big as your pinky nail.

I also couldn’t resist getting boba in Chinatown - it was a great way to quench thirst while walking around. In addition, I went to the Little Jewel of New Orleans, a nearby convenience store and restaurant, for their Deluxe Crawfish Mac and Cheese. I really couldn’t resist making this stop, because I’m such a religious follower of the Buzzfeed Worth It episodes. While the regular mac and cheese there is good, I would definitely suggest the deluxe, as the extra spices that come with the shrimp and sausages cuts through the rich delicious grease of the cheese very well.