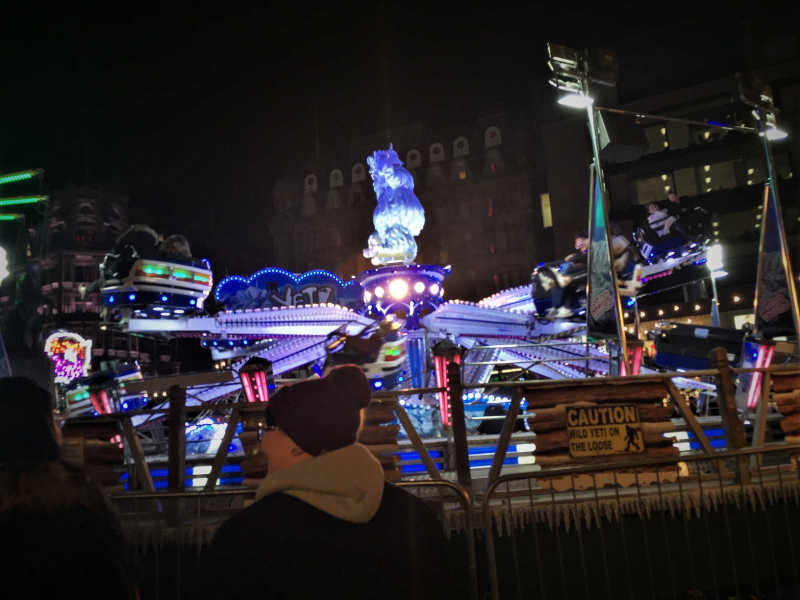 Cue bells, jolly music, and large men in red tracksuits It’s Christmas in Edinburgh! Take that with a grain of salt; I personally don’t believe that the holiday season starts until after Thanksgiving, regardless of what holiday (if you celebrate a holiday) in December. But the Edinburgh Christmas market did start last week, and so I had to go and visit. I joined along on a Singapore society trip but split off from them a bit early because my and I hadn’t had dinner before coming, so we had to go hunt that down.

Actually, it was an entire winter social evening. We watched the Nightmare Before Christmas, ate a few snacks, enjoyed each other’s company, and all in all had a good old wholesome evening. The Christmas market was definitely the highlight though, hence why it gets its own post. It was by far the largest Christmas market I’ve ever been to, and it was honestly more reminiscent of a carnival than it was anything else. There were 70-foot-tall rides, other amusement park specialties, and any sort of European food you could imagine. The most impressive part to me was the lights – there were as many lights as a zoo lights event or something like that. Also, the funniest thing was that we walked past the carousel playing Fairytale of New York City (which we just heard in Belfast). That was a bit of a surreal moment, but it made everything feel like it had come full circle.

For dinner, we settled on Mac N’ Cheese. It was delicious, creamy, and warm – the last of which being especially important because it was sub-zero (Celsius, hahaha). I also sprung for some real hot chocolate, delicious, made from pure chocolate, and perfect for a cold evening like this. In—terms of other crazy things we were able to find at the market, we found lobster rolls (??), churros, and oodles of other things. Just like in Belfast, there were lots of cute little shops selling ornaments and other holiday-themed goodies.

Unfortunately, though, there was one thing missing – an ice-skating rink! Edinburgh banned having an ice-skating rink just this year; apparently it was bad for the grass or something. Ice-skating has been a long-time tradition of mine at the holidays. Ever since I was little, I’ve been practically every year… And I can’t possibly break a tradition like that… but stay tuned until next week.