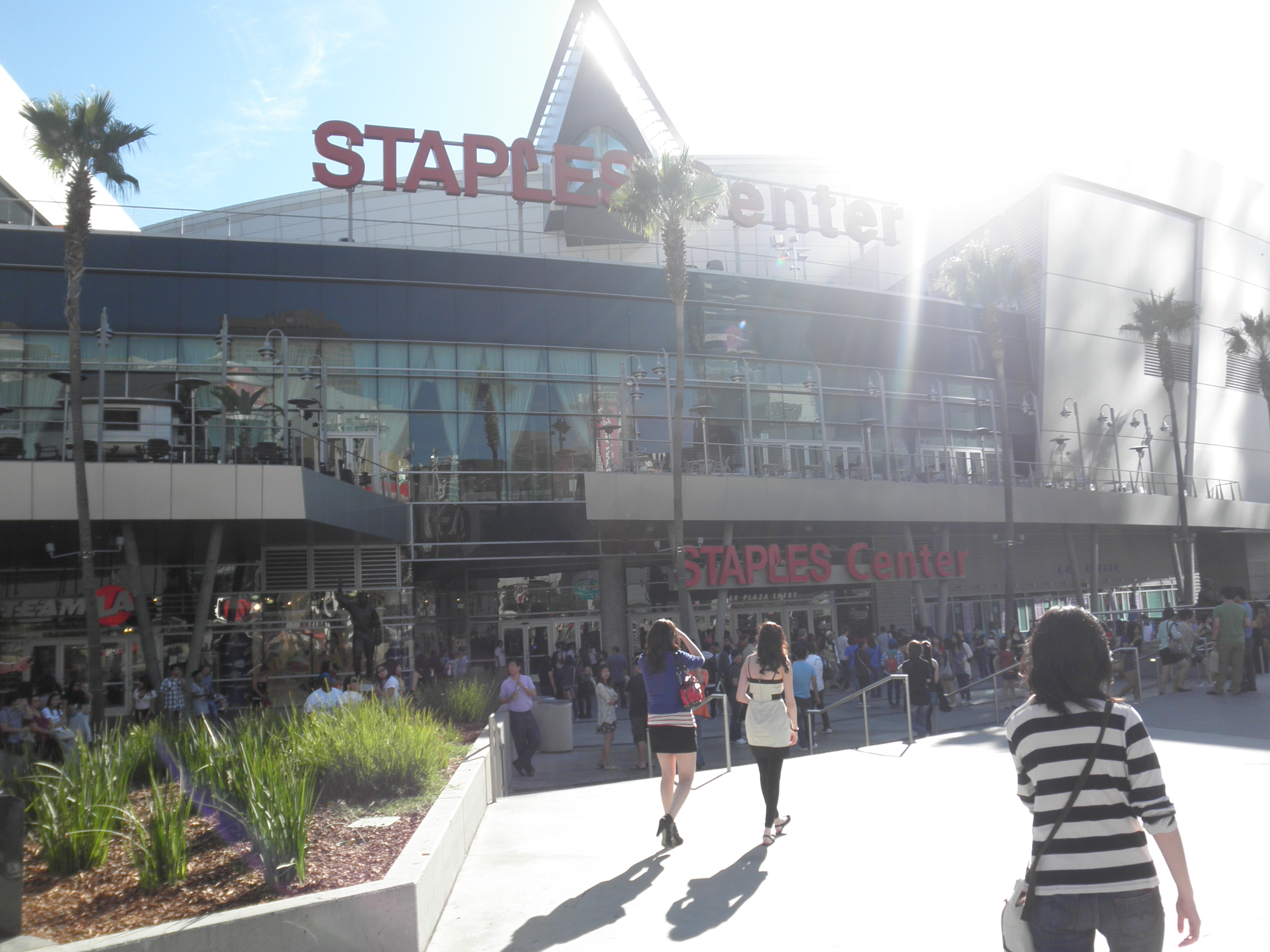 Before I left California for home I had one last thing left to do: attend SMTown ‘10. SM Entertainment is one of Korea’s largest entertainment company and every year they put on a concert of their most popular artists, called SMTown. But this year wasn’t just any other ordinary year. This year was the first year that they had a concert overseas in LA (as well as Tokyo and Shanghai) and I most definitely wasn’t going to let this chance slip away!!

Welcome to the famous Staples Center!! When my friends and I first arrived we were surprised how empty it was…. granted we had come only one and a half hours early. But thankfully there were tons of pre-concert events going on in the Convention Center right next door. So, we decided to check out the dancing, the T-shirt sales, and other events before heading back over.

And… this is what greeted us! This is only one of the four entrances to the Staples Center and trust me, all of them looked this packed. I don’t think I’ve ever seen so much black hair and people my height all in one place haha. It was an experience just trying to get into the Staples Center what with everyone carrying around fan signs and getting hyped up. I just remember being in quite the predicament when the woman in front of us was starting to get upset by all the pushing and snapped at us behind her to stop yet being helpless as the crowd behind us kept on pushing more. Oh, fan girls….

But after nearly 45 minutes of waiting and pushing to get in, my friends and I were finally able to get into the Staples Center and find our seats. For $80 (plus all the convenience fees Ticketmaster tacks on) you can get relatively close to the stage, granted this picture makes it seem farther away than it really was in person. I was surprised to see when the concert started that it was all sold out from the very top seats near the ceiling to the floor seats in between the stages.

After four hours of deafening music and even more deafening screams (of both the female and male kind), the concert was over. Here’s a picture of all the artists that performed. Though it was painful at times (like when the most popular boy band came out… I don’t think I’ve ever heard such loud, high-pitched screams), it was definitely a fun experience and I hope they’ll come again to LA next year!! But, after a fun night that resulted in temporary hearing loss and a very hoarse throat, it was back to Texas!

And what was there to greet me the day after I came back? Tropical storm Hermine that dumped more than a foot of rain in the span of three days. In Texas? Really? When I first looked at the weather forecast, not knowing about the tropical storm, I brushed off the prediction of rain as a weatherman’s mistake, but boy was I wrong. Here’s a picture of Hermine when it was right over us. I don’t think I’ve ever seen so much rain before. It definitely wasn’t the most pleasant welcome-home gift but I guess I can’t complain since, much like California, Texas had been in a drought for the past couple of years…..

But the stormy weather outside wasn’t going to stop me from spending some quality time with my parents making dinner. My first dish? Shrimp, mushroom, and spinach crepes. Here’s a picture of the crepes (bought pre-made… we weren’t that ambitious) with the sauteed mushroom and shrimp.

Next came a dollop of sour cream covered by a generous heap of spinach and topped off with swiss cheese.

Roll them up and stick them in the oven for 15 minutes or so and your crepes are done! Mm… delicious :) But now that the rain is finally over, it’s time to get out and spend time around Austin… Till next time!!