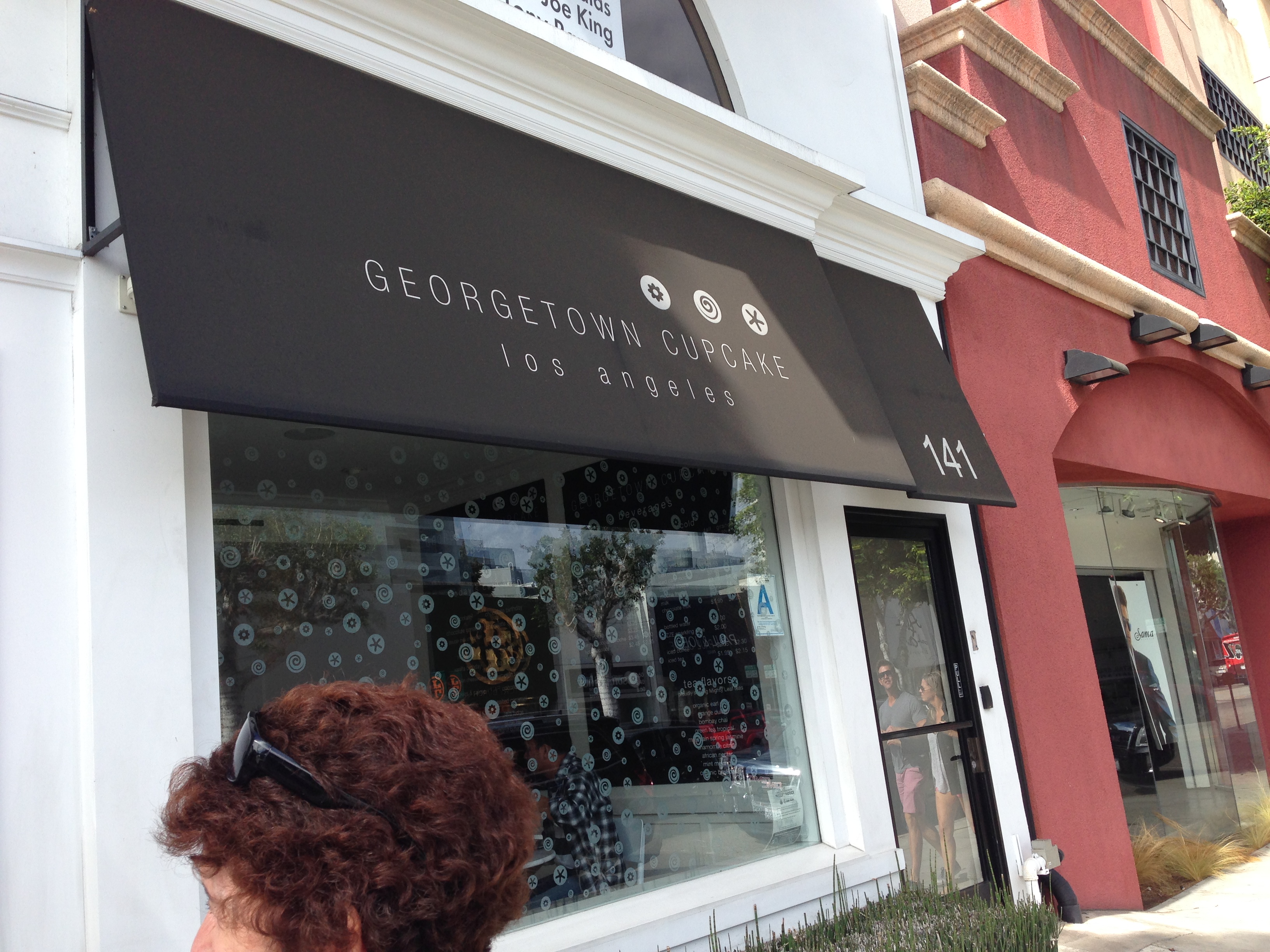 I try to get off campus at least once a week, whether it’s just going to Old Pas for dinner or heading to Micheal’s or Home Depot for materials for making gifts for our adopt-a-frosh program or lumber for Interhouse party dancefloor building. It’s rather hard to get too far off campus, unless you have access to a car. I was very lucky this Saturday to have had the chance to get to Beverly Hills for a walking tour of cupcake boutiques!

Yep. Cupcake boutiques. Bakeries that only sell (or specialize in) cupcakes. And ohhh my, there are a lot of them in Los Angeles. We hit up 6 of the most famous/most popular in Beverly Hills, which all happened to be within walking distance of each other. We found the tour on Amazon Local, and there are several companies that offer tours like this in LA.

We started at noon at Georgetown Cupcakes.

In Georgetown, DC, the line for this cupcake boutique runs around the corner on a daily basis. We had no problem going in (which may say something about the efficacy of such a high cupcake density in Beverly Hills). So as not to die of sheer gluttony (or puke before the end of the tour), we tasted miniature versions of their classic red velvet cupcake.

We then walked about 8 minutes to our next stop, Magnolia Cupcakes.

After Magnolia, we walked one block to Sweet E’s, a bakery founded by a contestant onCupcake Wars. These were the best cupcakes we had all day!

We had miniature versions of the monthly special, which was covered in Halloween candy.

I’m strongly considering sending a gift package of their cupcakes to my family and boyfriend on the East coast. The only thing stopping me is the knowledge that that would never, ever work.

Next, we went to SimpleThings, a small restaurant specializing in pie. We didn’t have cupcakes here, but we did have individually-sized salted caramel pies.

This was the straw that broke the camel’s back. I couldn’t eat anything else after this. That didn’t stop me from trying…

We finished up the tour with Joan’s on Third and Tartine Au Chocolat. At Joan’s I picked up a vanilla cupcake which I could not eat, no matter how hard I tried. At Tartine Au Chocolat, I saved a lemon macaron that turned out to be the perfect amount of sweet and tart.

Now, please excuse me while I run 10 miles to burn off all this sugar.