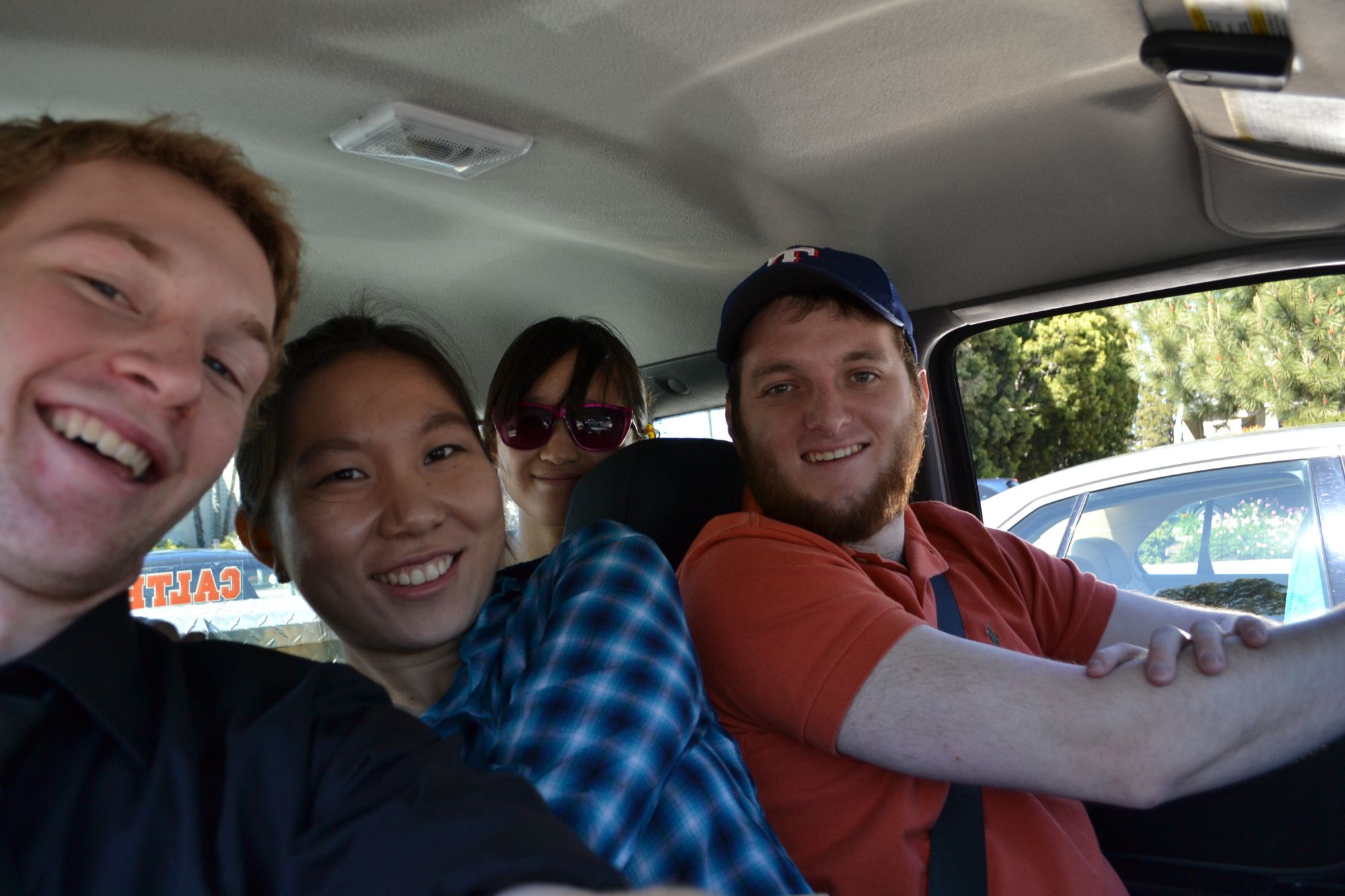 Dancing with the San Diegans

I am on the Ballroom Dance team here at Caltech, and a few weekends ago, we went to a competition at the University of California San Diego (UCSD). The comp was to take place on Saturday, and instead of leaving around 5:00 am Saturday morning in order to arrive on time, a group of us left on Friday night so we could get a decent sleep before the competition. The four of us took a truck down and I got stuck sitting in that awkward space between the truck bed and the front seats. It was oh so wonderfully comfortable sitting in a seat made for someone half my size.

We had heard of a great dessert place in San Diego, and so when we checked in to our hotel, we dropped off our stuff, checked e-mail, and then left to go get some cake. This dessert shop, called Extraordinary Desserts was a real hole-in-the-wall, but very nice once you got inside. There were no other shops around the area so when we came upon Extraordinary Desserts, we completely passed it and had to double back. We eventually made it inside though.

Earlier in the day, I had eaten a lot of Girl Scout cookies from the student event Be a Kid Again, put together by Tom Mannion (the Director of Student Activities and Programs), and so I wasn’t particularly interested in a whole dessert for myself. I wanted to split a lemon something or other (trust me, the actual name sounded really good), but they were out of that one, so I decided to just chill for the night. The two girls with us ended up getting a chocolate moose cake which they let me taste, and boy, that wasn’t a cake- it was chocolate disguised as cake. It was magnificent. I’m still glad I didn’t get a whole dessert though, even though it was good, it was rich.

I feel like this has turned into a dessert blog, so to talk a little about the actual competition, it was long, but fun. My partner and I placed first in several of the beginner’s heats (there are about 5 different levels of skill, with much variation in each level), but we didn’t make it very far in bronze. It was only the fist competition for either of us though, so considering that, we did quite well.

You can see Sue and me in black on the left and Vivian and Brenemer at the top.

The majority of the ballroom team at Caltech. We are a small team, but Caltech is a small school too. A few of us went out to an authentic (as far as I could tell anyways) fish place for lunch and met up with a couple of alumni in the area. We took our fish sandwiches back to UCSD and ate lunch at the “fake Stonehenge” there. It was cool to see some Caltech grads, since off of campus, I had yet to meet any Caltech people.

Fake Stonehenge! On our way out, we saw a guy doing parkour around the stone structures. **It was also my mother’s birthday that coming Monday, but I wouldn’t be able to be with her (in Maryland) and neither would my brother, who goes to Cornell. My brother had the great idea that he, our father, and myself would each take a picture of ourselves holding up a sign. Putting the pictures together would then read “Happy Birthday Mom, We Love You.”

The design of the idea. **I thought I’d take advantage of the beautiful beaches in San Diego and take my picture on the beach. Unfortunately, it was after the competition when we made our way down, and we didn’t quite make it to the beach for the picture, but I was able to get a nice one with the sun in the background from a cliff above the beach.