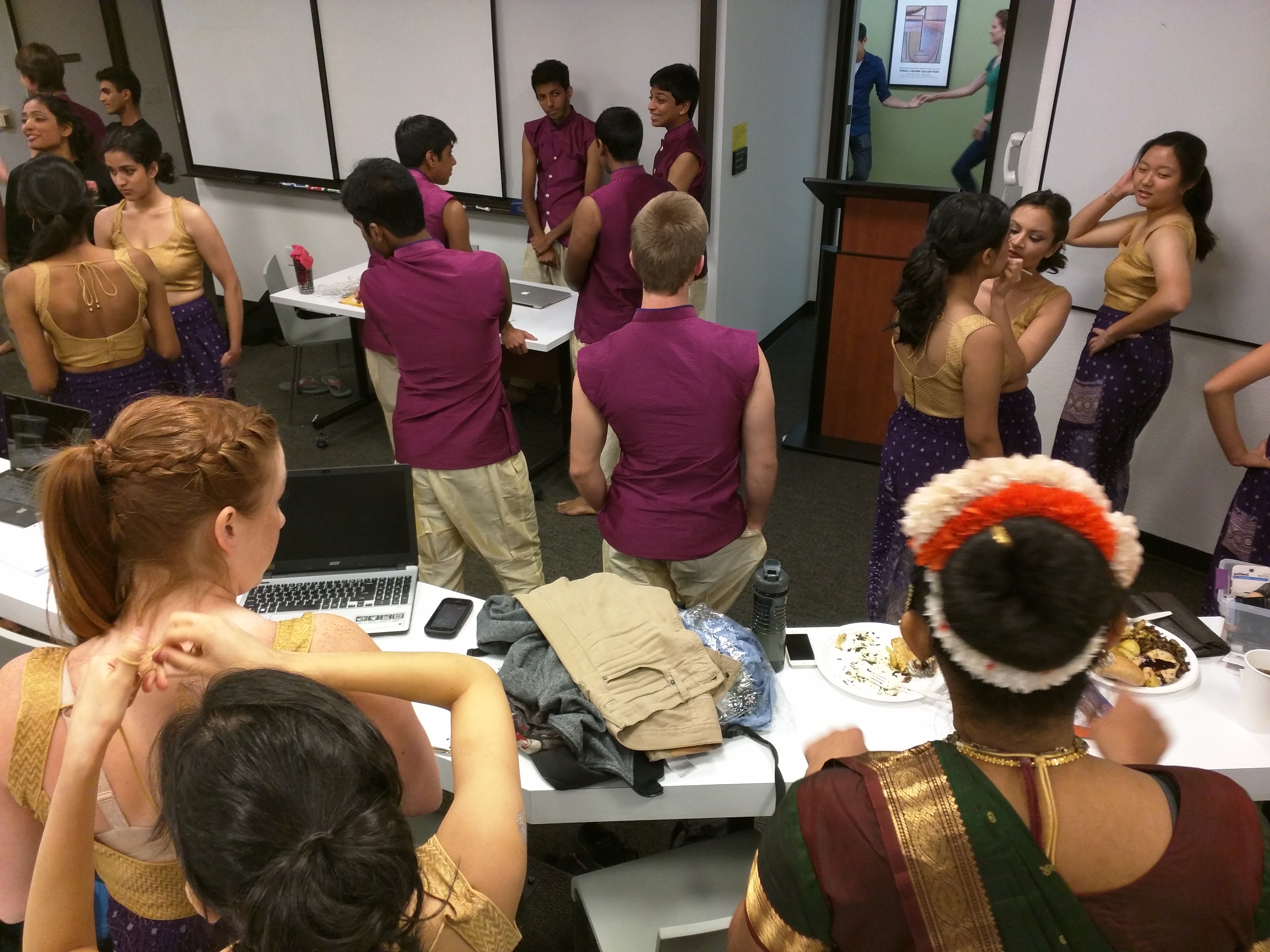 At the beginning of the year, we had club fair. Excited first term frosh as I was, I went around signing up for all of the clubs (there was a lot of free food…). I must have put my email down for at least 15 clubs, from Chemistry Club to French Club to literally every single dance group. I even signed up for Dhamaka, a Bollywood dance group, because they were super friendly at club fair. I was bracing myself for an influx of promotional emails, and was planning to try the different dance groups out before committing to anything. But from the beginning, Dhamaka stood out as the most well-organized of all of the groups. Right at the organizational meeting (mango lassi and samosas!), fearless captain Meera had everyone sign up on a spreadsheet, listing their contact information and dance experience. The dance rosters were sent out soon after, and then the rehearsals began.

First term, the focus was Diwali show. Our act was about 11 minutes long altogether, including dialogue in between each 30 second to 1 minute long dance. I was in one all girls dance to Beyonce’s “Survivor,” and in one co-ed dance to “Dilli Walli Girlfriend.” It was quite an experience. The dances were varied — some were hip hop, some were classical Indian, and others were a mix. We had around 2 hours of practice every weekend to learn the separate dances, and the week before Diwali show, we rehearsed the whole act every night. We had excellent purple pants and golden blouses for the girls, bought using Dhamaka funds and tailored by Ellora (our group mommy), and on the day of the show, we all crowded in Ellora’s apartment to get our hair curled and stage makeup on. It happened:

Second term, there weren’t any performances, but we still had many practices to prep for Dance Show, which was set for the beginning of third term. This time, I was in five short numbers — one very short “Circle of Life” intro, a more classical one to “Aa Ante Amalapuram,” hip hop to “Diamonds,” an all girls “I Choose You,” and the finale “Tujhpe Fida.” Dance Show is Caltech’s annual dance showcase, where groups from all over campus perform. This year there was hip hop, ballet, breakdancing, jazz, swing, rumba, and classical Indian, among other hybrids and novelties. We got to watch almost all of the other numbers during tech rehearsal, and I was blown away by so many of them. During the dress rehearsal and two show nights, we had to stay “backstage”:

Ramo auditorium, where most Caltech performances are held, is connected to Baxter, which has many lecture rooms. Dhamaka was split into two groups, since we have around 30 people. One group was the first number of Dance Show, and my group was the last. It was pretty nice, since I could work uninterrupted backstage until it was our turn. I churned out those Hessian matrices for Math 1c on the first night, and now, on the second night, I’m writing this blog post! Here’s a blurry video of our performance from the first night:

We have one more show coming up (in addition to performing at the Culture Fair), but it won’t be as big of an ordeal as Dance Show. For me, dancing is the most fun way to get exercise, and also to meet new people, so though rehearsals took up a lot of time, I always enjoyed them. And every time I thought about how much time I devoted to Dhamaka, I remembered that it was a ten or twentyfold commitment for Meera, Ellora, and all of the choreographers and organizers. They are truly superheroes. I’ve had so much fun with this amazing group of people — we all with very different backgrounds in dance (zero to hero?), but we all have a commitment to putting on a good show, and having a good time in the process.

Here’s people playing with exercise balls during practice one day:

Here’s our group getting hyped right before Dance Show (photo creds to Jiseon):

And here’s most of the group (photo creds to Snigdha):