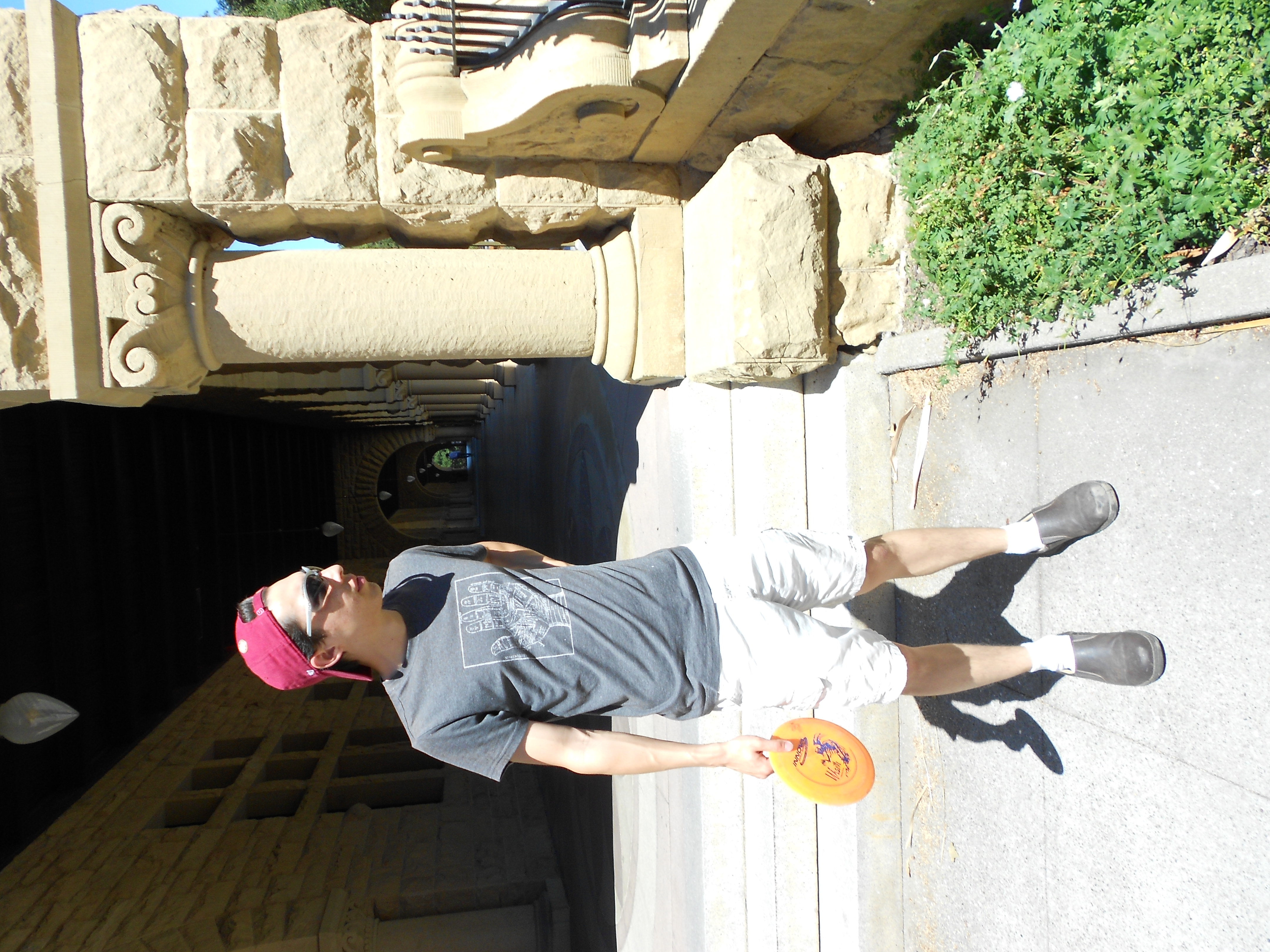 For those who haven’t been introduced to the world of disc golf, allow me to instruct you. It requires speed, stamina, agility, endurance, bench pressing, lifting weights!

Disc Golf is perhaps the MOST CHILL sport of all time. By far one of my favorite hobbies, it’s the kind of sport that will take two enemies and make them friends or take two friends and make them besties. As my good friend once said, “I have only two loves: America, and the glorious clink of two chains of a disc golf basket.”

Dear readers, I apologize for the length of this post. For your browsing pleasure, I’ve spaced it out with some nice pictures. Have fun!

The premise of disc golf is simple. You must “tee off” from anywhere on a pre-placed rectangular concrete slab and throw your disc into a chain mail basket located some distance away. Holes can be very short but incredibly technical, requiring a lot of skill and control. Other holes can be very straight shots that need one or two super powerful throws to sail all the way to the target. The longest hole I have ever played was an incredible par 3 that was 500m from tee to basket. (Let’s just say a hole in one would be a miracle.) Today, many public parks include disc golf courses (either 9 or 18 holes) that are open to the public and maintained fairly regularly. Back home, there are at least 4 different sites that we like to frequent. Disc golf is so versatile, though, that one can actually play anywhere – and I have! “Urban” disc golf as it is sometimes called involves holes that you make up as you go along. More on that later.

This spring break, I made sure to pack my three trusty discs for my trip up to Stanford. Incredibly, I had two opportunities to disc! On Sunday, some friends and I drove to Golden Gate Park, in San Francisco, to attend a Lindy-Hop Dance social as well as hit the disc course. Considering that the park is absolutely massive, it took us nearly an hour to walk from our parking spot to the first tee. Some parts of the park looked like your regular evergreen forest while other parts seemed to me as if I was stepping back into prehistory, where a dinosaur could have leapt out from behind each fern. The course itself was incredible. Throwing up and down hills, over streams, and even past the famed Golden Gate bison, we wound our way over hill and dale. After two hours, we had only finished 13 holes, but were so exhausted, that we called it a good game and headed back into the city for dinner. Overall, an incredible day with great friends and a great game.

Later that week, my older brother (with whom I was staying) stumbled upon something called the “Official Unofficial Stanford Disc Golf Course”. This was an 18 hole course invented by one of the campus frats detailing a route covering the entire campus. An urban disc golf course, everything on the course is invented oneself. Instead of concrete slabs to tee off from, we followed instructions that said, “stand on the North Side of the red fountain within arm’s length of the oak tree.” The baskets followed the same casual format. “Hit the fourth lamp post on the left of the street.” “Land your disc in the sunken planter on the top of the hill.” Along with a friend from high school and three discs apiece, we set off.This course did not have too many tremendously challenging holes.

The real difficulty was not causing any pedestrian casualties as we went along! That’s the real trouble with urban disc golf.

Look at that color combo ^

[Insert slapstick comedy interlude!] On one of the very last holes, one of our discs got stuck in a tree. Of course the most logical course of action was then to throw a shoe to dislodge it. When that predictably got stuck, we clearly had to throw the other flip flop at it. And when that got stuck, I finally stepped in to climb the tree and remove all three objects. And subsequently, the lowest branch broke and I toppled down to the ground. Good thing my friend was conveniently standing directly below me and broke my fall!

^Teeing off on the Main Quad. The pause in the middle was while we waited for tourists to pass out of range.