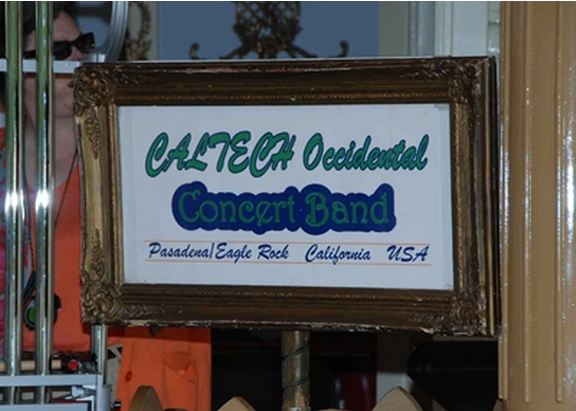 If you were in Disneyland on Saturday, you might have passed the Carnations Plaza Gardens. There, you might have seen the sign above. And you might have witnessed the fabled Caltech Oxy Concert Band as they made a triumphant return to Disneyland (last having played there a little over 10 years ago).

IT WAS AWESOME!!!!!!!!!!!! The entire day was rather surreal. We loaded up onto the bus around 9 am, wearing our concert clothing and munching on bagel’s from Noah’s that Bill had oh-so-kindly brought us (knowing, I’m sure, that most people had woken up 15 minutes before and probably hadn’t thought about eating). The bus ride itself was unmemorable, given that almost everyone was passed out almost instantly. We’re (mostly) college students, give us a break! To make Disneyland the “happiest place on earth,” there’s a lot of bizarre rules and regulations that Disney requires. For one, everyone in the band had be outside the park by 10:15 to get onto the bus, which then drove backstage. Then we all got down, changed, and took a picture–no instruments, no sunglasses, hands at the side. After being given about 30 minutes to warm up, we had to walk–single file–through this backstage path to the stage. When we got on stage, we were allowed one note and one note only to tune–and that, too, had to be an ‘A.’ Of course, we were supervised all day by a lovely lady named Elisabeth.

Despite all that (oh, you also can’t re-enter the park in concert attire), the concert as a whole went really well. By the time we played (12:30 on the dot), the weather had improved remarkably, the sun was shining, and we were chomping at the bit. The concert itself passed in sort of a blur…I know that I hit most of the high Ab’s in the Stars and Stripes, caught the cue for the piccolo solo in “Always Look On the Bright Side of Life,” and that there was a lot of applause : )

In any case, once we finished we left via the same secret back path. We did run into Mary Poppins, who very properly wished us a “Good day” as we passed. We also met Jessie, from Toy Story 2 (and Toy Story 3opening on the 18th of June in 3D!), and paused for a click as Lynne got a picture with her. Wish I’d brought my camera…

In any case, after getting back to the bus the rest of the day was free for the band to run around Disneyland! While I have to say that Disneyworld beats Disneyland any day of the week, Disney is better than not-Disney anytime.

In any case, all in all it was an exciting, awesome day. It’s definitely the sort of experience I could only have here at Caltech…I remember when my high school orchestra band went on tour, and we had to schedule hours upon hours of extra rehearsal time. Here, though, we were able to work efficiently and learn the music–some of which we’d seen only a week or two ahead of time. I’ve never been happier about being able to integrate band into my life here.

Sadly, this week is going to seem so drab in comparison.

Until next time, Mythili.