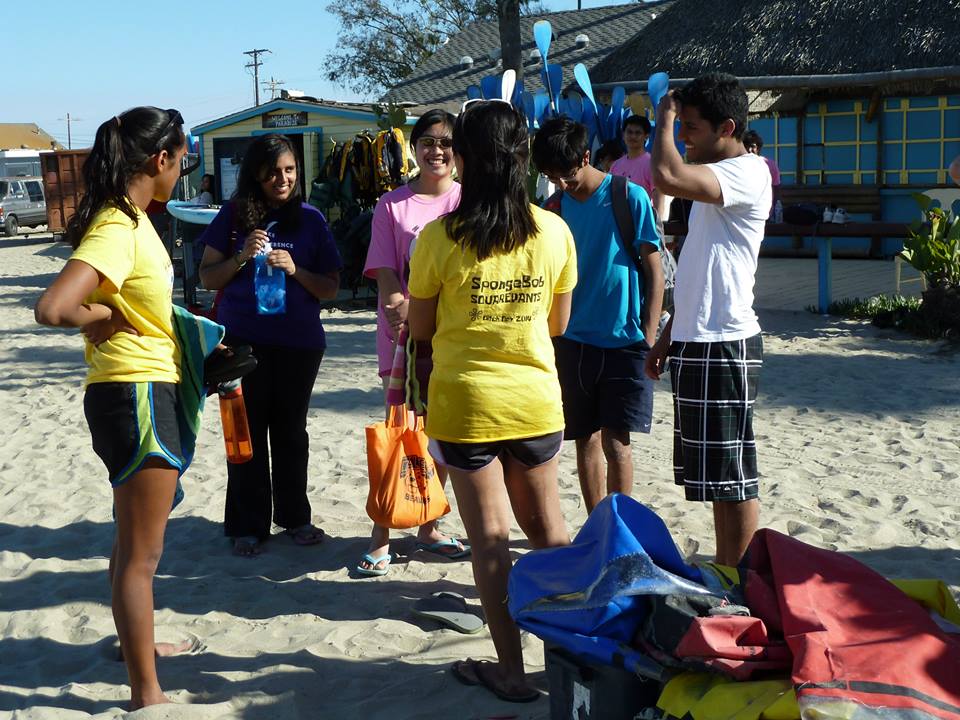 Back at the House, we ran into Sherman, our old president. The tradition is to duct-tape any senior you find on campus to a tree, but we didn’t have any tape on us. However, our next task presented us with a huge tub of water ballons, plenty of ammo to spare on pelting a hapless upperclassman 5-to-1. “No, stop!” Sherman pleaded. “I’m carrying pizza for my stack. You can’t get me wet!” (He had helped make a Sherlock stack, and we heard later that their group traveled all the way to the Getty Villa in Malibu, among other interesting places.)

With an evil grin, one of the frosh popped a balloon on Sherman’s back so that he wouldn’t get the pizza wet.

Water balloon capture-the-flag (capture-the-map) ensued, with some of our Team Patrick members sneaking inside to grab extra yellow shirts and infiltrate the enemy. Then it was time for a barbecue lunch at Tom Mannion’s house–Mannion foodalwaysmarks a special occasion at Caltech. Though we sat with our own stack, it was a chance to see what some of the other stacks in our House and other Houses were up to. The entirety of Page House had themed their Ditch Day Game of Thrones, with each stack being a different noble House in the series. We met some of our Page friends wearing blue House Targaryen shirts carrying plastic blow-up dragons and ceramic dragon eggs. The entirety of Avery House was divided into just two stacks (Venerable had six I believe), and one of them was Despicable Me Minions, with everyone wearing a yellow shirt onto which jean overalls had been carefully hand-sewn.

Toward the end of lunch, we were given the instructions, “Go back and change into swim clothes, then meet by the stack wallboard by 12:30.”

“It was on those waivers they made us fill out at the beginning. Seriously, did no one else read the parts they crossed out with black pen?”

We split into smaller groups and clambered into cars driven by the seniors and alumni, arriving an hour later at Long Beach. It turned out we had just enough people–20–for a discount on the kayak rentals. My roommate and I had never kayaked before, but we learned soon enough how to peddle efficiently–in rhythm with your partner if you were in a two-person kayak. “I can see why people who row boats gain so much arm and ab muscle,” I was groaning by the end. We kayaked down the canal, even docking and going to Starbucks in the middle for a strawberry smoothie. And of course I couldn’t resist the opportunity of taking pictures from my phone as we sailed under a bridge. Who normally has access to that kind of view? The funny thing was that all the seawater dripping from the oar onto my arms and eventually puddling around my legs dried quickly in the 100-degree weather and left crusts of salt patterned like the wave ripples on my skin.

Apparently the plan had been to tape an image of Gary on one of the bridges that we would pass as we kayaked, but even the seniors were having so much fun that they forgot about it. In the end we all just gathered on the beach and took a stack picture with the tardily-produced Gary. By this time it was 5 pm–a whole day had gone away without any classes whatsoever. But we weren’t about to go home. It was a tradition for Venerable House to collectively gather for a barbecue on Dockweiler Beach at the end of Ditch Day, so we went beach hopping.

It was time to trade news with people who had done other stacks that day. All of them seemed to have had some major off-campus activity of their own. The Princess Bride stack went horseback riding, Bill Nye went paint-balling, and Dangerous Ideas went jet-skiing. We sat around eating good burgers and chips–they even managed to lug one of the Venerable grills all the way here–as the ocean breeze mitigated the hot desert weather.The tide came in and the waves swept along the shore, destroying the sand tower and surrounding fort and trench system we had made.Reuniting with friends I hadn’t seen all day because we were on different stacks was nicer than words can describe.After the strenuous physical activities of the day, none of us quite felt like swimming in the ocean, so we dipped our feet in the water and took pictures against the sunset.

A year ago, as a prefrosh, one of the random facts of the day on the Caltech website was “Ditch Day is tomorrow, May __!” Big deal, I thought. Doesn’t every high school also have ditch day? My expectations were altered a bit when I came to Caltech and learned of Ditch Day’s history, how it had evolved from seniors ditching class and running away to the beach, to underclassmen pranking their rooms out of jealousy, to the seniors stacking bricks and other materials against their doors to prevent entry, to the holiday it is today where all undergraduate classes are canceled, all assignments postponed, and the seniors spend many months and dollars creating elaborate stacks for the underclassmen’s intelligent enjoyment.

What I had not anticipated was the completemood changethat surroundedDitch Day. Caltech never felt as festive as it did that day, not even on Prefrosh Weekend. School was simplyout, ispretty much the only feeling to describe it, and adventure was in. Wth all the seniors’ excitement feeding the frosh’s (and to a slightly lesser extent the sophomores’ and juniors’), the presence of all eight undergraduate Houses doing Ditch Day activities pervading the campus at one time, the invasion of all the recent alumni who were available to return and help out, the gawking television crews, and the promise of a whole glorious 10+ hours of none-academic acitvity, Ditch Day was not simply a longer Fake Ditch Day. It was so much more. It was a downrightholiday, smack on a Thursday in May in the middle of the term.

When I’m a senior, I’ll get to create my own stack. By then I’ll have accrued two more years of experience in elaborate puzzles made by some of the smartest and most creative people on the planet. I can only say: I’ve (kind of secretly) wanted to be a part of a mission like people do in movies, games, and books for the longest time, and just when I thought I was getting too old, and such a thing too impractical, here I am presented with the chance to do it in college…

And now it’s time to say, if you’re reading this, thanks for sticking with all 1900 words!Till next time,