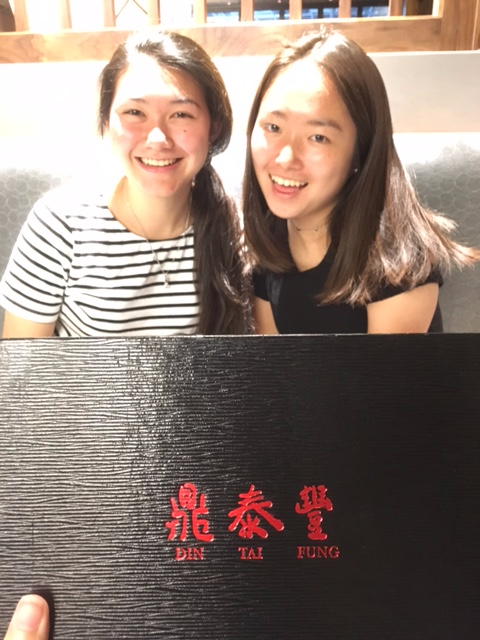 I have made really great friends at Facebook, but we hadn’t yet planned our own outing. So Saturday was the day that we decided to go to the mall in Santa Clara - the Din Tai Fung there was calling us and who dislikes shopping, or at least looking at stores, with friends? However, none of us had really planned ahead of time. About 9:00 the night before, we needed a time and place to meet up. The place was preordained, but the time? We let Facebook Messenger make a plan for us (which I promptly named “Plan???”): it said we should meet up at 12:00. AM. Midnight didn’t seem like a great time to venture to a mall (a good time for many other things, but not a mall), so we switched it to noon - and arrived at the mall late anyway.

If you’re going to Din Tai Fung anywhere, it’s always important to put down your name as soon as you get there. Sometimes the wait isn’t bad (30 minutes is considered a short time) but other times you will see, as we did, that the wait can be 2-3 hours.

With a wait of 2 hours, and a whole mall to explore, what better way is there to pass the time than to go shopping? We spent a lot of time walking around the mall and going into stores that caught our eyes - everything from Lush and Sephora to Tokyo Lifestyle and Forever 21. Of course, most of the time was spent just looking. We had an ambition to go into one of the super expensive stores like Louis Vuitton or Versace, but in the end we couldn’t work up the nerve to walk into those stores. They were far too intimidating.

We spent so much time just looking around, we were called back to Din Tai Fung (and a delicious lunch!) before any of us bought anything. However we certainly had our fun afterwards: Tiffany got an eye makeover in Sephora, Jessica got things from one of her favorite stores Brandy Melville, and I got a couple of things from Hollister. I was very obviously not up to speed on West Coast brands, because I had no idea that Brandy Melville and Cotton On, stores which both of my friends knew, even existed. However it was certainly an eye-opening experience, as I had no idea many of the styles in those two stores existed. It was also really fun just talking with friends in the mall about the style of clothing that we wore.

After a long day at the mall, consisting of 5-6 hours spent in one complex indoors, we decided to go outside and enjoy the hot tub in Tiffany’s apartment complex. It was hopelessly large, but very nice to relax in, with enough space for us and two other parties to have our own corners. The two of them laughed at how slowly I acclimated to the hot water, but I’ll call it even because I also laughed at them for how cold they thought it was at night.