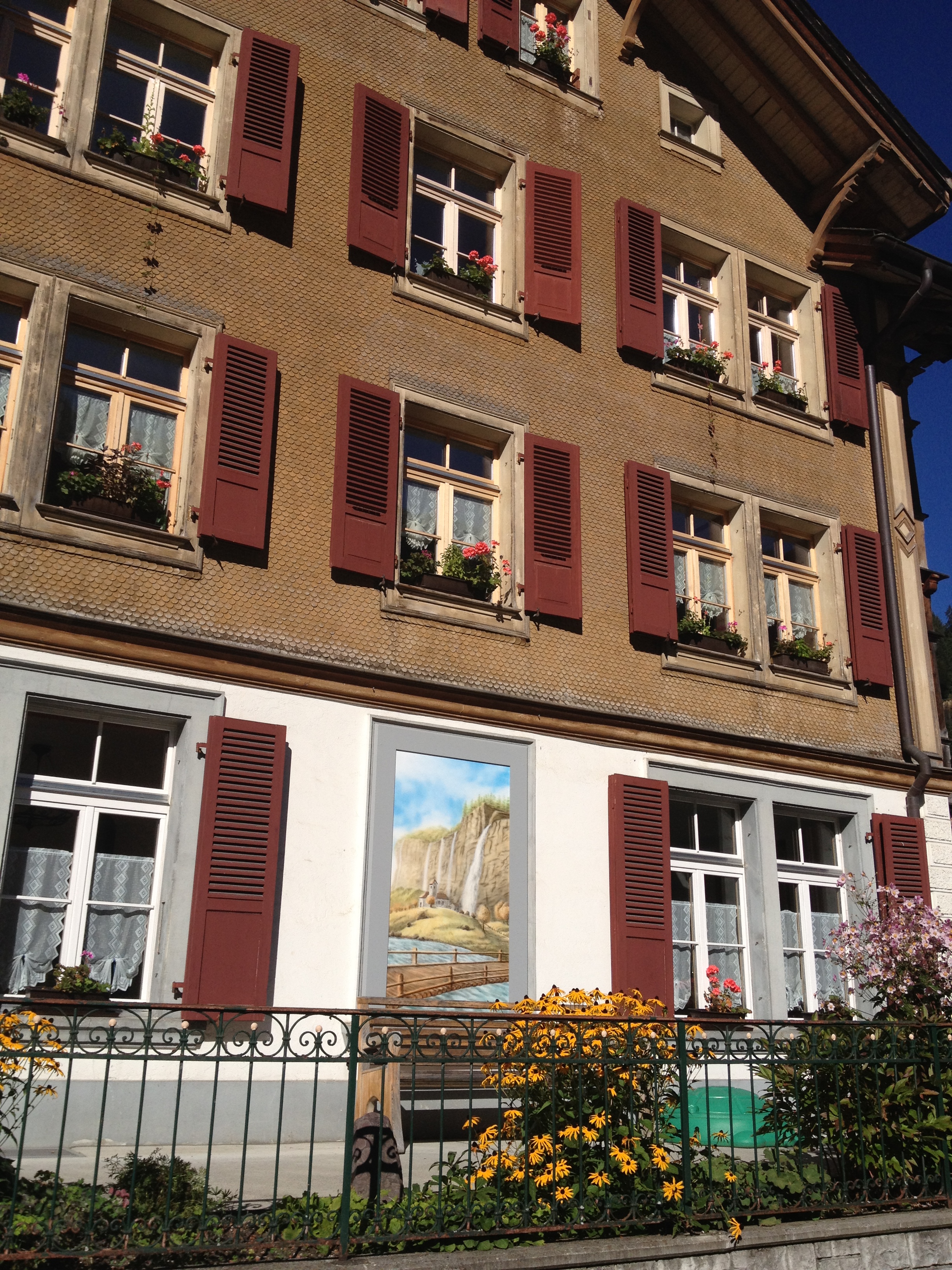 Exploring Bern, the capital of Switzerland!

This morning, we planned to take the train to Bern, the capital of Switzerland, this day, but since all shops and restaurants are closed on Sundays, we were in no hurry to leave Lauterbrunnen. We decided to hike to Staubbachfall, which is the waterfall above the town. At night, the waterfall is light from behind so the cascading water is visible. Thus, Staubbachfall is actually more visible at night than during the day becuase the mist from the waterfall is also light up at night. Stuabbachfall is a 297m high single drop waterfall. Apparently, the frirst measurement of Staubbach Waterfall was carried out in July 1776 by a geometrist Johann Samuel Wyttenback. He used a team of helpers with rope and after ascending the mountain to the top of the waterfall, he tried to let the rope down. However, he had underestimated the height of the waterfall and so the villagers had to collect pieces of rope and knot them together in order for the length of the rope to be measured.

Art work on a house in Lauterbrunnen of the famous waterfalls circling the valley. It was a nice and sunny morning and on our way to the Falls, we saw a pretty graveyard with a lot of colorful flowers. We climbed up a hill and hiked up the stairs to a balcony look-out right behind the falls! Tunnells had been cut in the rock so we could walk behind the waterfall itself and look across and down at the village. The mist and sunlight made for a very pretty sight! It was like rain was coming from a clear blue sky!

View from behind Staubbachfalls 297m above Lauterbrunnen valley. What a pretty rainbow and sight! Afterwards, we took the train to Bern, Switzerland’s capital. When we arrived, the first thing we noticed was that Bern was much warmer than Lauterbrunnen. I was somewhat relieved to be closer to sea level. When we were hiking and riding lifts up and down the mountains, the big elevation changes made my ears pop a lot. We met a nice woman outside of the main train station who noticed that we looked lost and explained how to get to our hostel. We dropped off our backpacks at the Bern Hostel and decided to use the rest of the afternoon to explore Bern! Since it was Sunday, so most of the stores were expectedly closed. However, surprisingly there were a lot of people out on the streets enjoying the good weather. Bern has a lot of decorative fountains and all of the roads are cobblestone. In addition, the main streets with shops had large arched covered walkways, which came in handy when it rained. There was one fountain that had an ogre graphically eating some babies, but there were also more normal ones of warriors. Interestingly, a significant number of stores are located in what used to be wine cellars lining the streets. Their entrances were slanted doors that opened up to a staircase leading down. Also, lining the cobblestoned streets were many shops are on the ground floor with apartments on the higher levels with many balconies above.

Decorative Fountains were common in the streets of Bern. This is the Fountain of Justice similar to that we saw in Lausanne.

The Bern Clock Tower that has a figurine show on every hour. We walked out to the bear pits at the end of town to saw the bears that Bern is well-known for. According to local folklore, the Duke who founded Bern decided that the city would be named after the first animal he met on the hunt, which turned out to be a bear. Thus, the bear is found on the seal and coat of arms of Bern and from at least the 1440s, live bears have been kept in the Barngraben. Originally, the live bears had been kept in a circular bear pit, the Barengraben, however, they were moved to a bigger enclosure instead of just a pit in 2009. There were 2 older bears, Bjork and Finn, with their two cubs, who were very cute and we got to watch them swim.

The famous live bears of Bern. *

One of the bears swimming playing. We climbed up a hill to Rosengarten, a really beautiful park with fountains and a lot of roses. Since it was Sunday and everything was closed, there were a lot of people with their friends and family enjoying themselves in the park. There were some cafes, benches and picnic spaces, which were perfect for relaxing and enjoying the sun.

Smelling the roses in the Bern Rose Garden. *

Beautiful fountains and greenery in the rose garden! We went to the Spaghetti Factory for lunch and they gave us complementary appetizer bread which was unexpected since this was the first restaurant we had been to in Switzerland that did this. Since we were not used to the warmth of Bern since we had grown accustomed to the cold temperatures at the high elevations in the Alps, we decided to do a river float in the Aares River. Thus, after changing into our swim suits in the hostel, we went to the Marzilibad and floated down the River Aare. There were a designated areas along the bank for getting in and out of the river where there were ladders with yellow poles and signs telling you about the last pole to grab on to. This river bank seemed like the Californian equivalent of going to the beach. The park area had wooden decks for sun bathing and there were a lot of families and friends hanging out. Some groups even brough their own boats or rafts to float on. There was also an outdoor pool in the park area as well.

The River Aares running through Bern. The river was verycold and the current was very fast! My entire body was numb and it was impossible to swim upstream even though we tried. However, it was really fun to just lie on our backs and let the river currents carry us down. Getting out was a little difficutly but fun nonetheless becuase we had to grab onto poles and not get scraped by the rocks around the area.

We had rosti for dinner and then we wandered around to explore the nightlife. Unfortunately, most bars and clubs were closed on Sunday night so we eventually gave up and went back to the hostel. This actually worked out well for us because we met three other women staying in the hostel. They invited us to chat with them, so we sat and drank beer and ate sour red berries. We ended up talking until past one in the morning.

One of them was and Australian teacher who quit her job to travel for a while.

Another was a teacher in the LA school district in a similar situation. She was super enthusiastic about great places for romantic proposals. She was also a medical administrator at a school for natural medicine. It was nice to meet people from such diverse backgrounds with various reasons to travel.