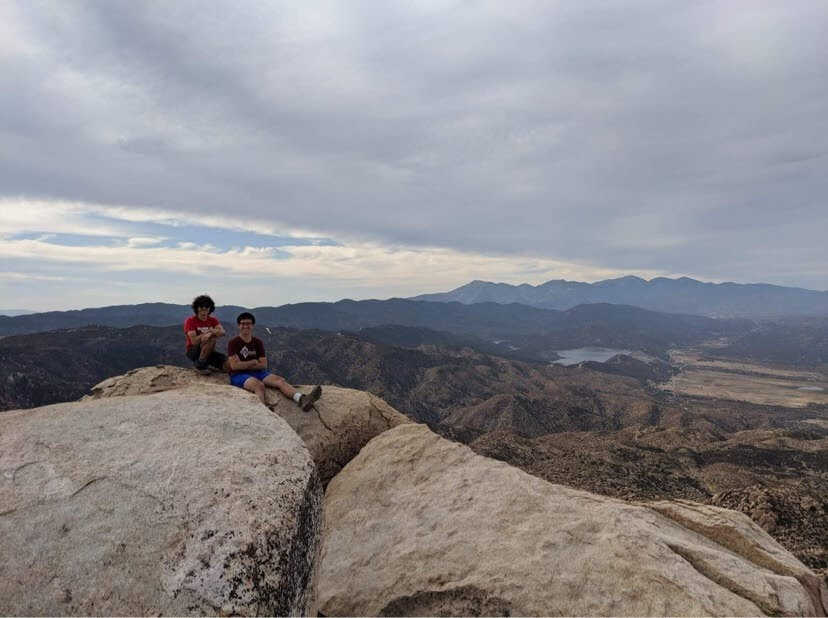 Exploring the Mountains of SoCal during the Virtual School Year

Hi y’all – this is my first post on the blog, and I’m glad to be here! This is actually a continuation of my friend and fellow blogger Tyler Colenbrander’s previous post about our experience living together over the past three virtual terms at Caltech. You can see his post at this link.

I’m going to be talking more specifically about one of the ways we passed the time in each of the places we lived – exploring the outdoors. During the pandemic, spending time outside was one of the safest ways to get out of the house and away from our sets when we could. It was an unexpected plus of three terms of virtual school, and it opened my eyes to the amazing hiking all around Southern California.

Our fall term in Lake Arrowhead was where I first fell in love with the mountains. I’m from central Maryland – for us, the mountains are a three-hour drive away, and even then, the highest point in the state is a little over 3000’. For contrast, in a 30 minute drive, CA State Route 18 up to Lake Arrowhead (the “Rim-of-the-World Highway”) climbs 5000’ into the San Bernardino mountains. 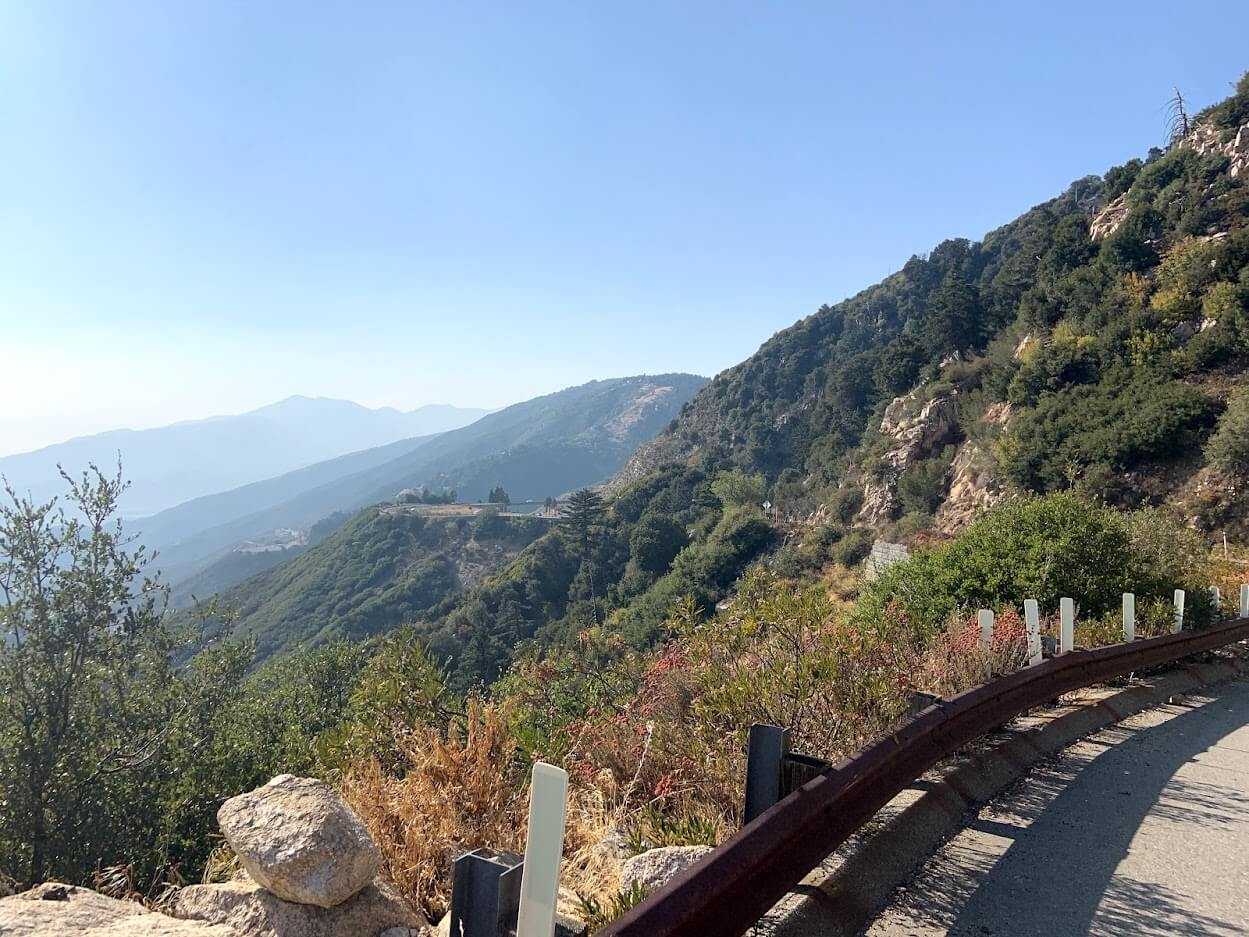 In Lake Arrowhead, we quickly discovered a very different world only an hour from campus. The elevation took some adjusting to, but we settled into a rhythm of regular walks to the lake half a mile away and hikes in the surrounding mountains.

There was a smaller lake closer to where we were staying with a nice grassy area and a bench. I would take my lunch there to eat sometimes, and when I had a 48-hour-long final at the end of term, I went there to work on it and feed the ducks – it wasn’t a bad substitute for the turtle pond, which had always been one of my favorite places to sit and think on campus.

I also tried branching out and biking around the mountains. The San Bernardino Mountains are geologically a lot younger than the Appalachians, and the result is some incredibly steep ridges and canyons. The hills quickly wore out the brakes and cranks on my bike, but steep climbs invariably gave incredible rewards in the form of panoramic views of Lake Arrowhead and the San Gabriels. I quickly learned to appreciate the mountains of SoCal as more than just a backdrop to the cities in the valley below. 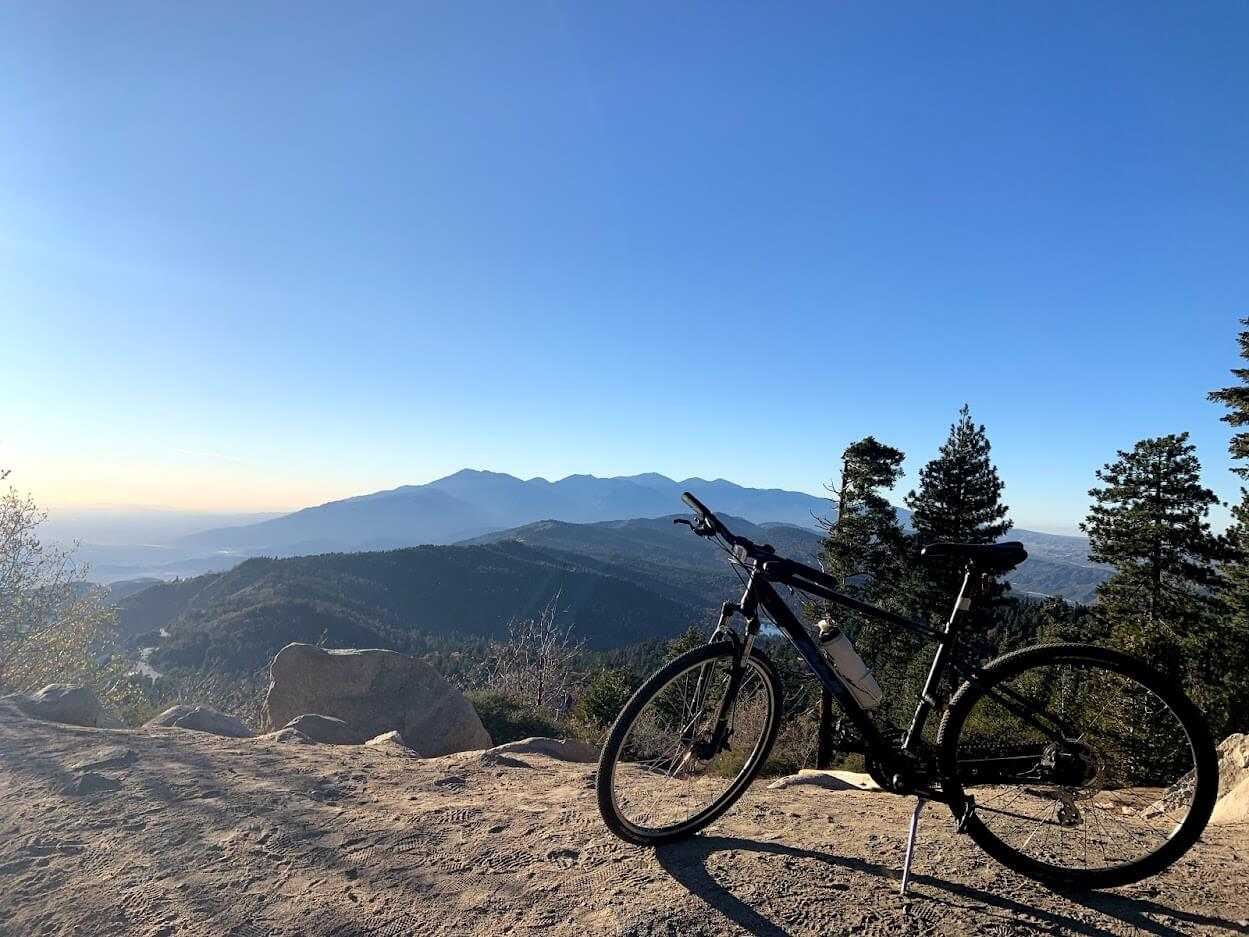 SoCal is pretty dry, especially compared to the regular rain and storms I’m used to back home. While trails back home were generally well-packed dirt (or mud, after it rained), trails in the San Bernardinos were dustier, and the vegetation was browner and more sparse. In some places, we saw scars from past wildfires. Despite the dry weather, we did get one early-season snowstorm in October – an afternoon spent playing in the snow was a welcome reprieve from the sophomore year set slog. 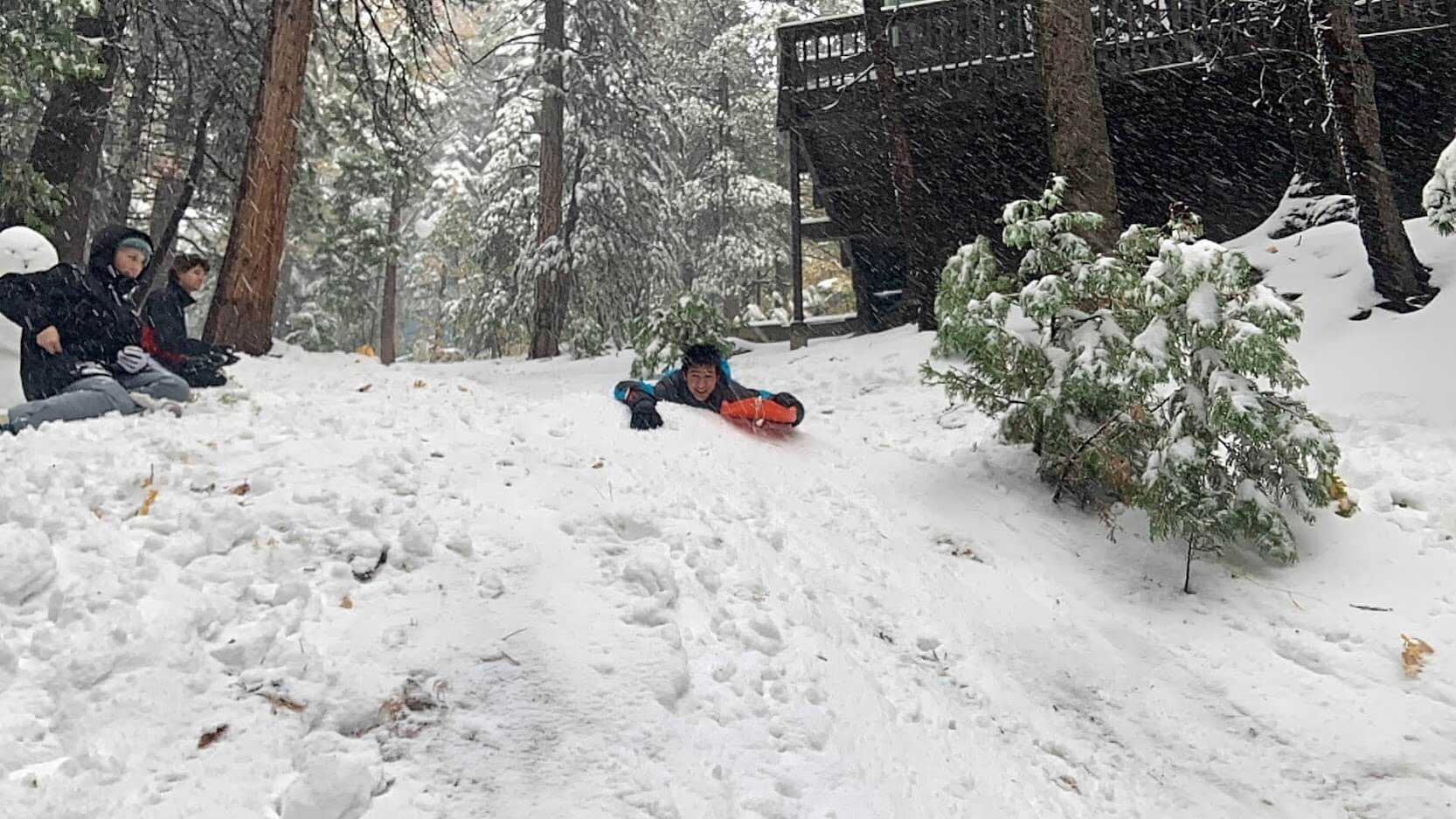 After a term of hiking, biking, and strolling in the mountains, it was an abrupt change of pace when we moved to Ann Arbor in the winter. The Midwest is flat! Reuben and I could go for 3-mile runs and gain not more than 15 feet of elevation. Because it was winter, going out also meant braving 10-degree wind chills and powdery subzero snow. It was the kind of snow that’s too dry to clump properly into a snowball, and the landscape was so flat that we couldn’t find a good sledding hill near our house. 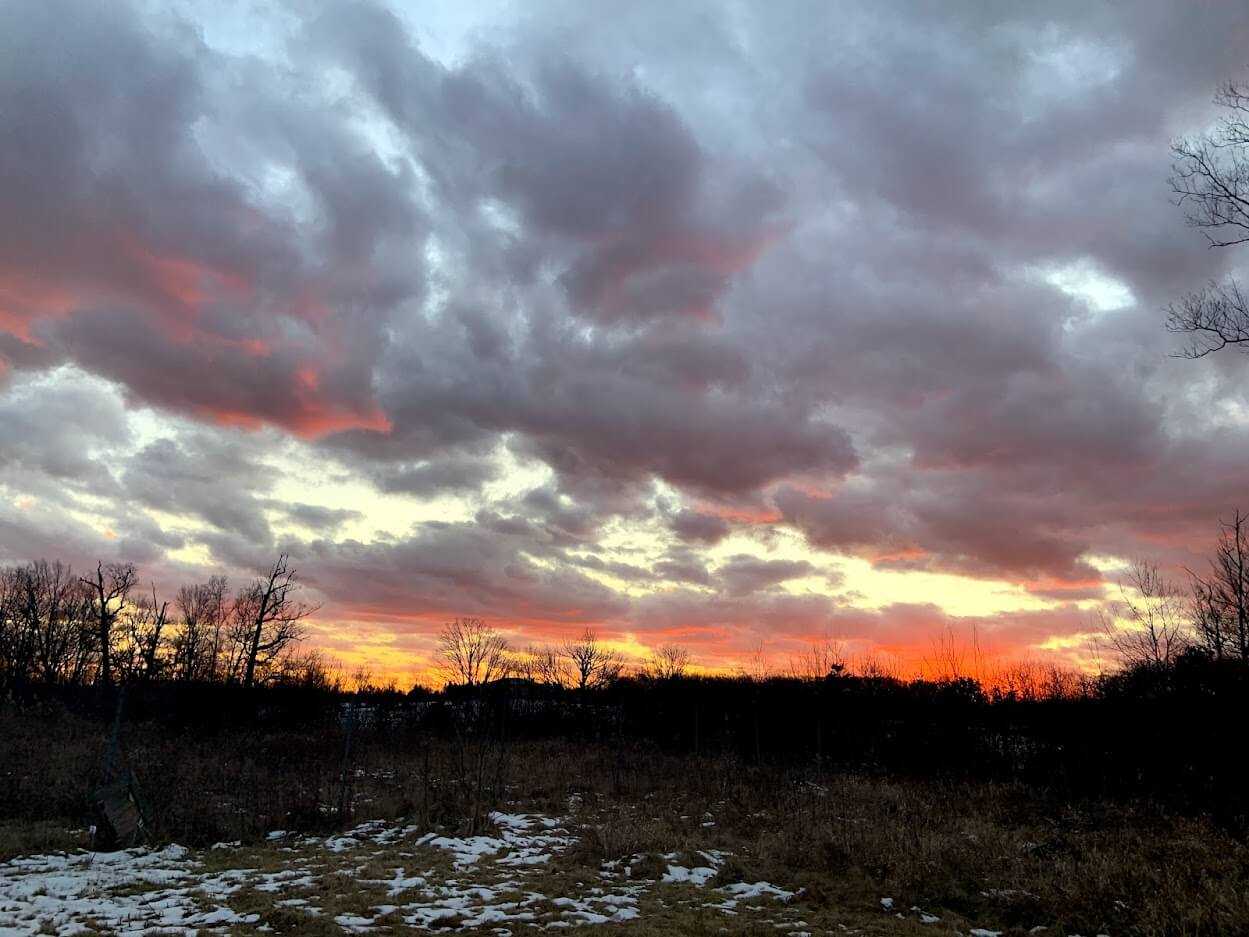 In the spring, we were back in the San Bernardino Mountains, this time in Running Springs – a smaller town at higher elevation than Lake Arrowhead. In Running Springs, we lived at the base of Keller Peak, a 7882’ peak that straddles the Rim, overlooking Redlands to the south and Big Bear to the east.

As we had with everywhere we lived, Reuben and I made a habit of going for walks/runs regularly (Running Springs ended up being a somewhat fitting name). There were lots of unmarked trails to explore around town, and the top of Keller Peak was a 20 minute drive away. 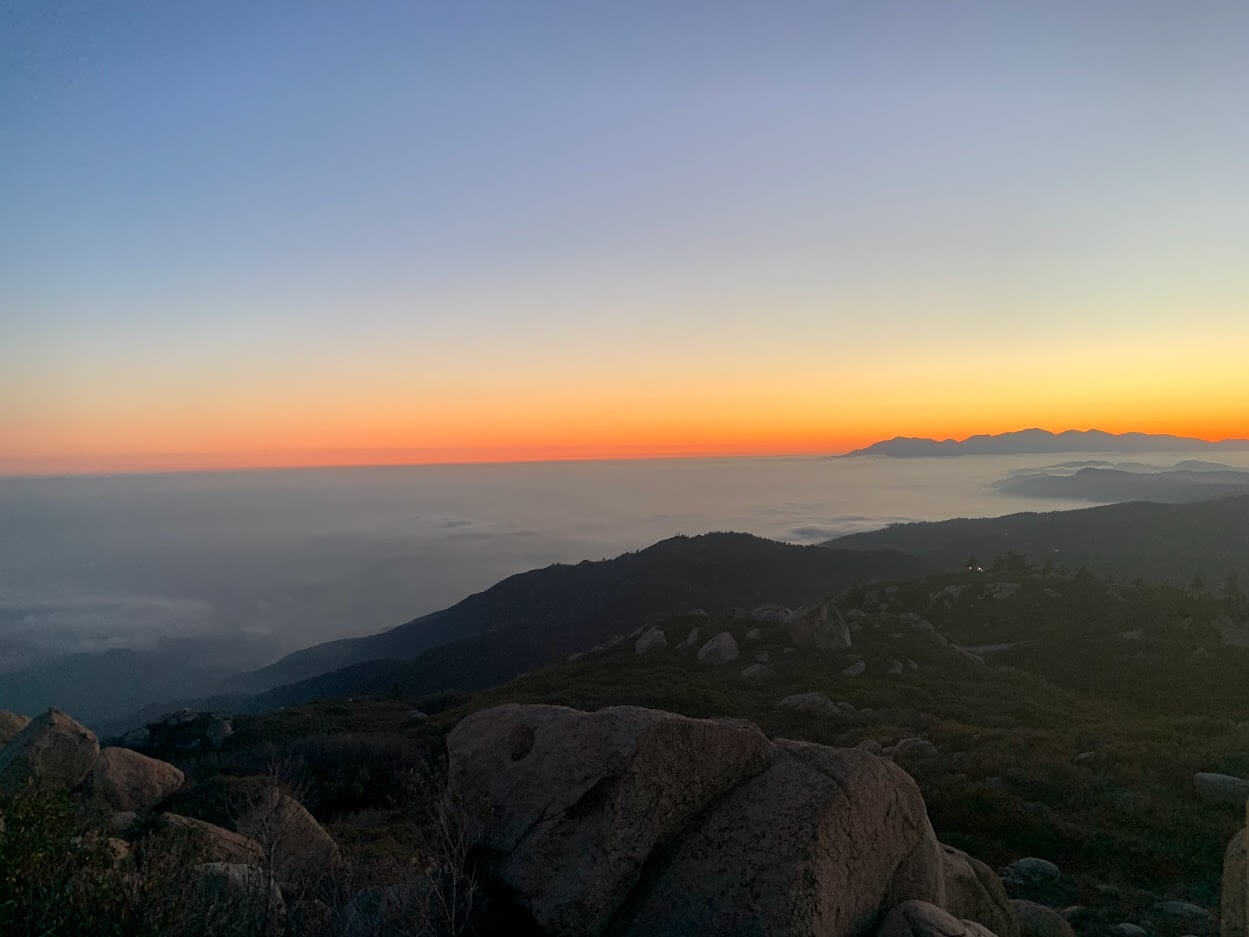 We were also close enough to Big Bear (30 minutes’ drive along a beautiful stretch of road nicknamed the Arctic Circle) that I made a habit of driving into Big Bear twice a week or so and going on hikes there. Big Bear is quite touristy - the trails there were nice, but I could tell that they would become crowded during the summer tourist season.

Towards the end of term, after the vaccine became widely available and restrictions began to ease, I was able to drive down into Pasadena and meet up with classmates for hikes in the San Gabriels. There are a number of good hikes around Mt. Baldy that are only 45 minutes or so from campus. Like many hikes in SoCal, they offer sweeping views of the city in the valley and the mountain ranges stretching away to the north, and (with the exception of the slog up Mt. Baldy itself) they’re all pretty reasonable in length and difficulty. 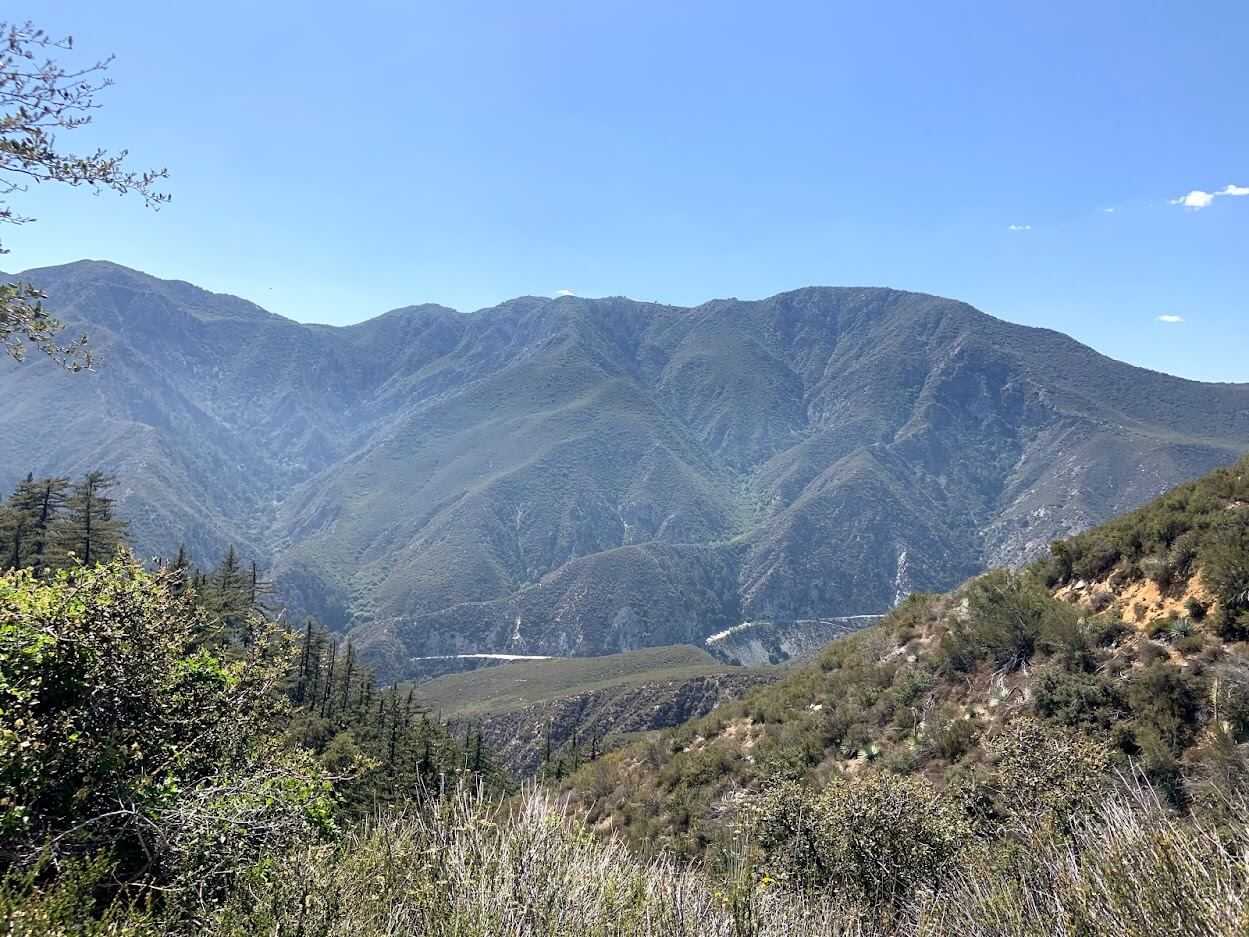 Best of all, I did what I should have done when I first got to campus as a frosh: I explored the mountains directly north of campus. At the top of Lake Ave, only a 10 minute drive (or 30 minute bike) from campus, sits the trailhead for Echo Mountain, a 3205’ promontory that looks out over Altadena and Pasadena. It’s a quick hike up with 1000’ or so of elevation gain, and as I discovered last June, it’s one of the coolest views of town out there. If you look closely from the top, you can make out a bunch of campus landmarks; when my friend Lorenzo and I were up there, we ran into a couple of Blacker alums who were doing the hike while visiting Pasadena for the end of term! 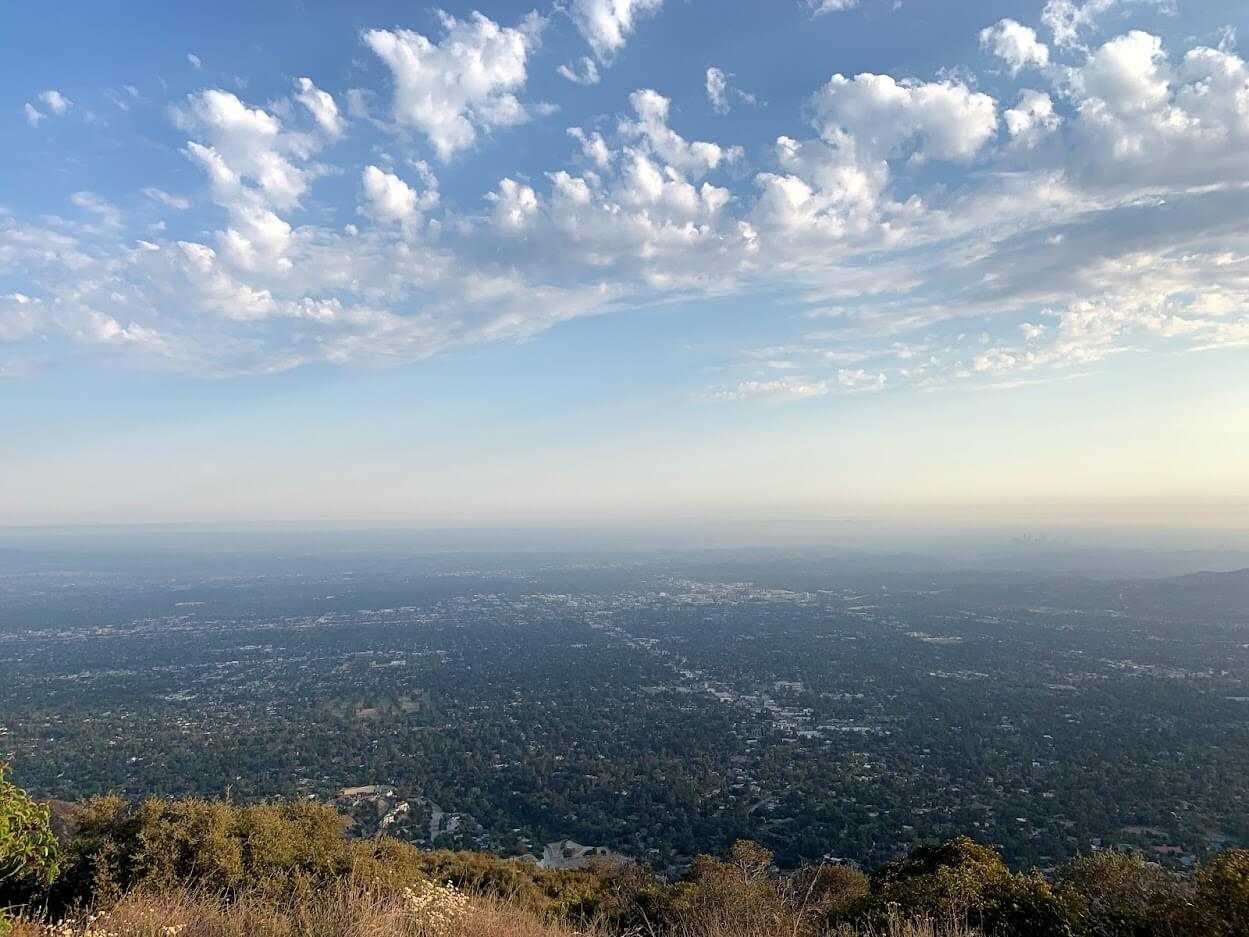 A bunch of other trails start at the same trailhead (they pretty thoroughly crisscross the mountains between Altadena and Mt. Wilson) and I definitely have plans to explore more of them throughout term. Living in the mountains over quarantine definitely taught me a lot more about what they have to offer, and it has renewed my appreciation for the fantastic nature we have within easy reach of campus!

If you’re curious, you can find a list of the hikes I did this past year at this link.