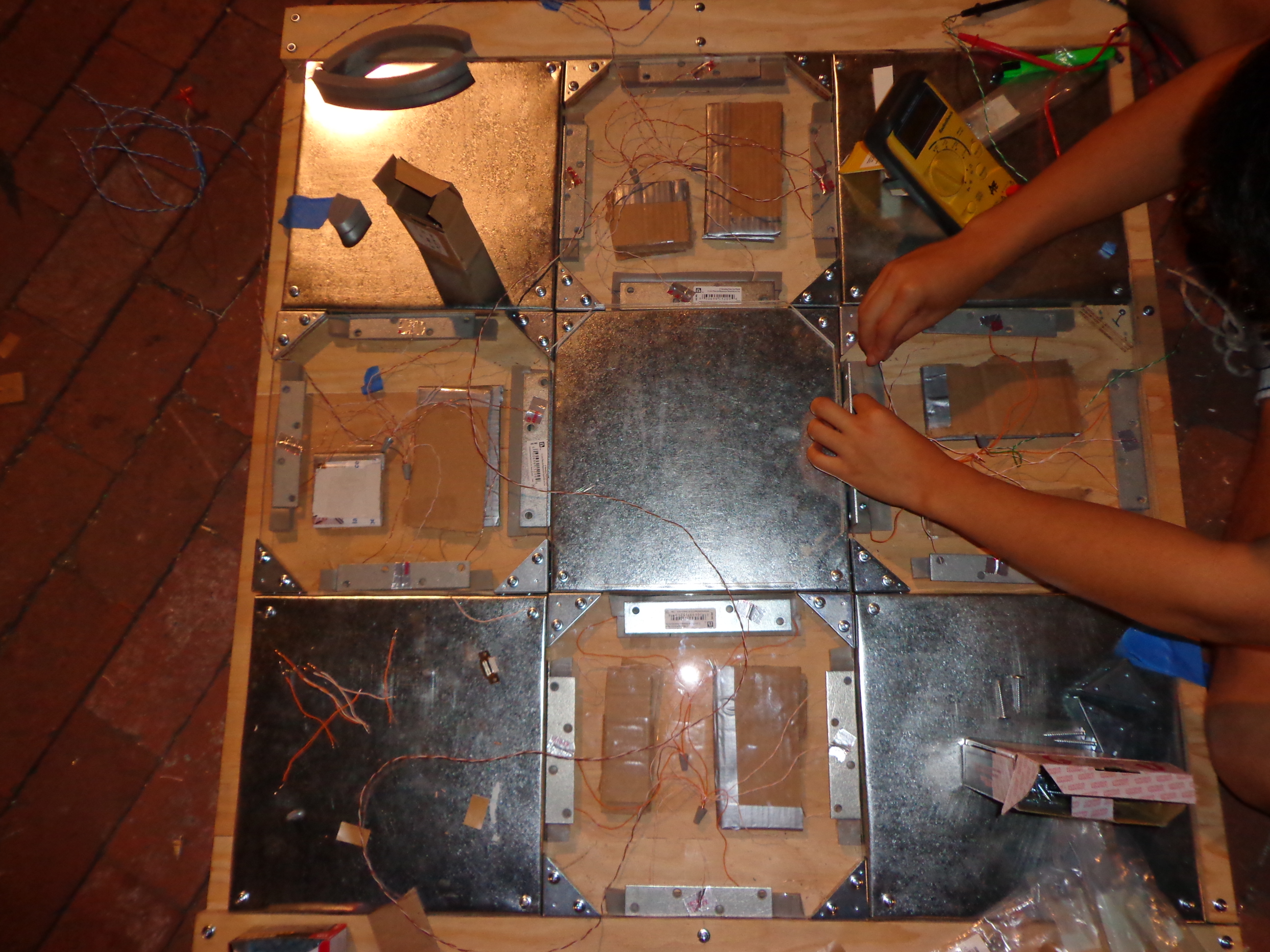 We’re almost done building the first DDR mat! (Myprevious post about one arrow panel was actually written a week or two ago but wasn’t published for a while; we’ve made a lot of progress on the DDR mats since then.) It works well enough that we can play some songs on it; we just need to tweak the sensors a little, make the wiring neater, and add Start/Escape buttons. We haven’t tested it very thoroughly yet, but we’ll be playing on it tomorrow and should be able to work out any sensitivity problems soon. Here’s a picture of the almost completed DDR mat:

The four mending plates around the edges of each arrow panel are the tops of the sensors. (See this post for details about the sensors we’re using.) The cardboard rectangles in the middle of the arrow panels prevent the plastic from bending too much and cracking when someone steps on the arrows. Wiring all the panels gets rather messy; there is one wire for each screw and mending plate, plus two wires to be connected to the control board, for a total of 12 wires under each arrow panel. All the wires from the screws are connected together with a twist cap connector, and all the wires from the mending plates are connected together.

Close up of a finished arrow panel We actually didn't have to solder much at all. The wires attached to the screws are just tightly wrapped around under the screw heads, and the wires attached to the mending plates are just taped on (there's a lot of pressure on the taped wires when you step on an arrow, which makes the contact still pretty good). It turned out we weren't able to solder these contacts since the screws and mending plates are zinc coated and too large to heat up with a soldering iron. The only soldering required was to attach some wires to a d-sub (VGA) connector, which will connect to a USB adapter to plug into a laptop. The USB adapters are commercial Cobalt Flux DDR mat control boxes, which we can use for both the Cobalt Flux DDR mats and the mats we're building. Eventually we do plan on buying some USB game controllers and making our own USB control boxes/adapters by soldering wires to the game controller circuit board. Anyway, we're looking forward to testing and playing on the new DDR mat soon!