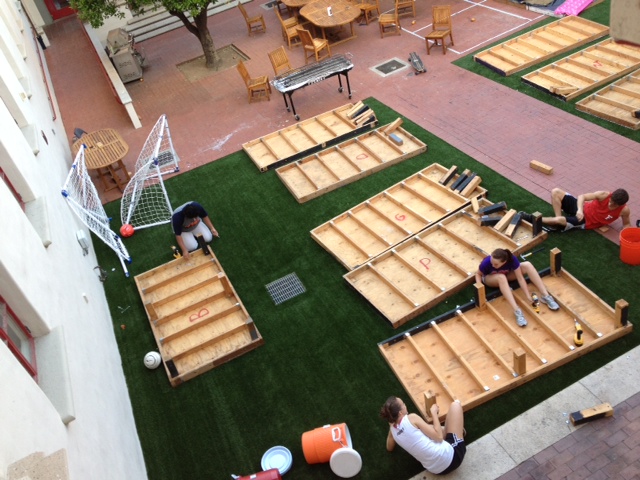 This past weekend was our Interhouse party BFP, also known as Big ‘Fleming’ Party. It was similar to the other Interhouses, but this time, since I’m part of the Social Team, I took part in preparing for it. There were some ups and downs, but for the most part I enjoyed the process. Apart from the organization aspect and getting food and drink, the preparation was the building and painting of the dance floor area.

We first had to bring the platforms up from storage and put legs on them.

The hardest part about putting the platforms together was making them level. The ground was uneven and we had to find the right height of shims to place under the leg until it matched. To be honest, I spent a couple hours helping with the leveling then tried to get out of it as much as possible because it was not fun. I enjoyed the painting though!

…and the final product!

Except for the three-point, the lines were pretty easy to trace out using a straightedge or a piece of wood as a makeshift compass to draw the circles. So for the three-point line, we actually had a basketball player walk where he thought the line was and someone behind him tracing it. I guess after playing for so long you know it pretty darn well. And now it’s time to catch up on schoolwork!