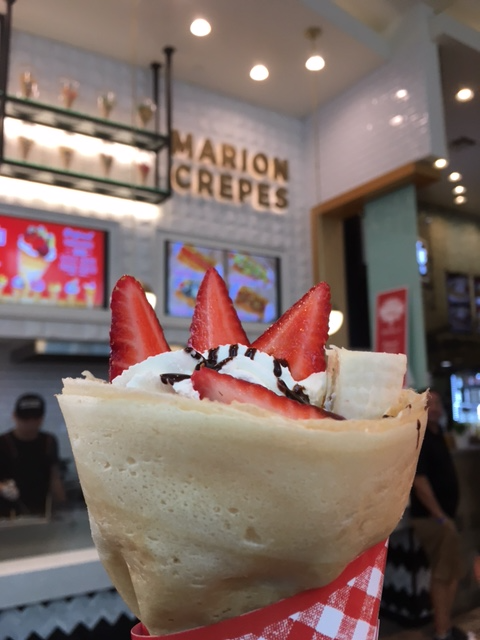 Although Caltech is in a great area, and downtown Pasadena has a bunch of food offerings, sometimes nothing can beat going to the mall for some Din Tai Fung. I went with a few friends I had made in the intro functional programming class; our plan was to eat Din Tai Fung, look around at a few stores, and go back home. It turned out to be a little larger in the food scope than we had originally planned.

The mall that has the Din Tai Fung is in Arcadia (although I think it technically is called the Westfield Santa Anita). However, since I have been there so many times, I know it also has a great Japanese-style crepe place. It’s called Marion Crepes, and is located in the food court. What makes Japanese crepes a little different from French crepes is that the sweet ones are filled with cream, fruits, sometimes chocolate sauce, and then they are occasionally topped with ice cream as well. In addition, they are rolled into a cone shape, so the look a little like a blooming creamy fruity flower.

As for our meal at Din Tai Fung… It’s just as good as it always is. If you’ve never heard of it before, Din Tai Fung is an international chain that started in Taiwan, and became famous for their Xiao Long Bao. One of their restaurants in Hong Kong even has a Michelin star. And the Xiao Long Bao at this location really lives up to their reputation. It’s soupy, rich, and feels absolutely decadent. In addition, my family also favors their pork chop - its pounded thin and fried deliciously.

And no meal is complete without dessert (even though we started out with some)! I went to a place selling taiyaki, which is another japanese dessert. It’s dough baked in the shape of a fish that is traditionally filled with red bean paste. However, they now fill them with things like custard and Nutella as well. There was a little stall near Din Tai Fung that even sold the fish as cones for their soft serves (which came in flavors like matcha, black sesame, and taro).

I really splurged this trip, because I couldn’t resist getting a cheesecake from Uncle Tetsu’s. This is also a chain, but originates from Japan. This cheesecake is not the typical New York style, that is very heavy and rich. Instead, the Japanese style cheesecake is light and fluffy and jiggly. It is very different, so not everyone likes them. However, it is a really great, not-as-sweet alternative to our own much loved NY cheesecake.