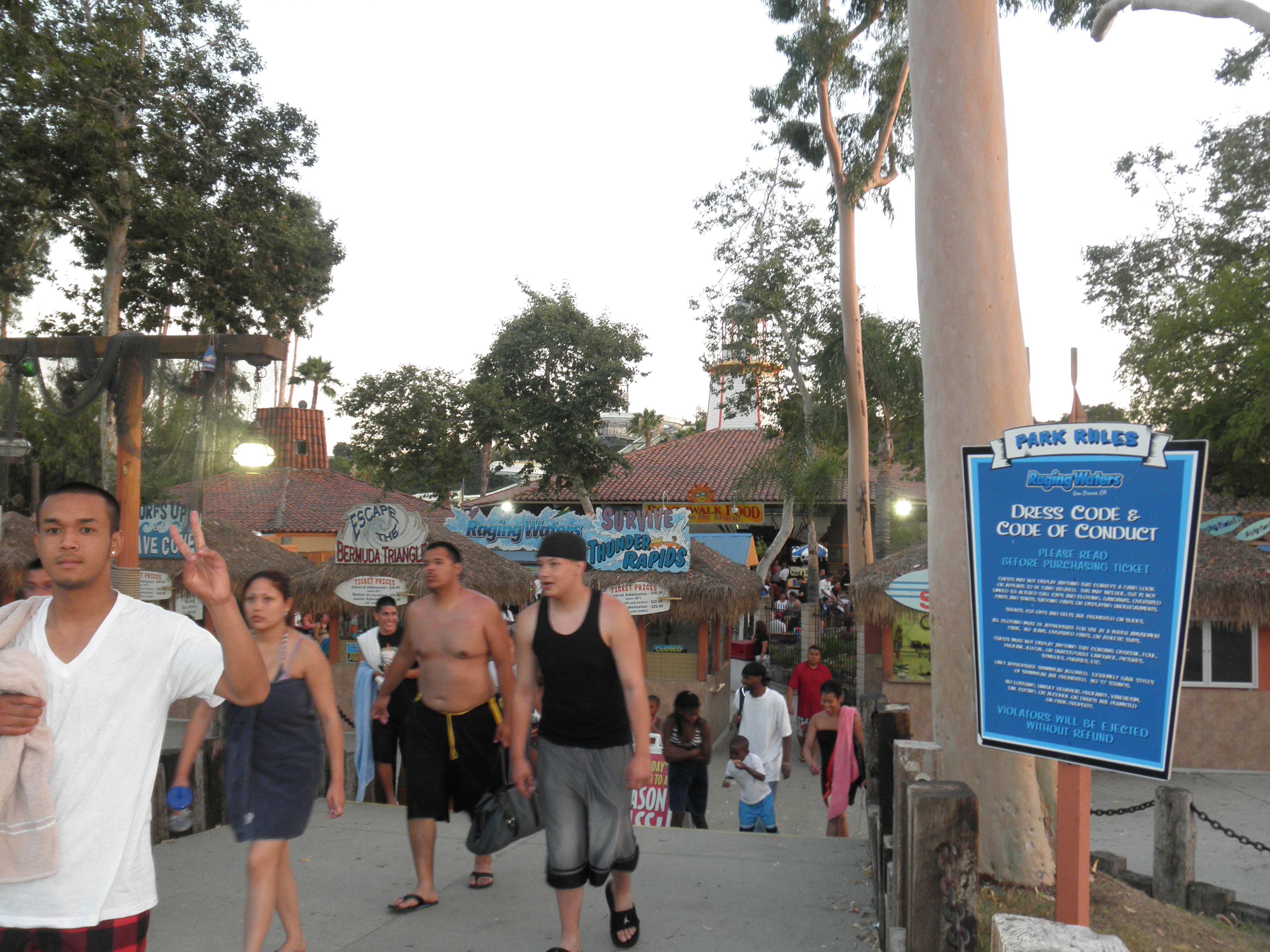 Though California is known for it’s mild temperatures, things started heating up last weekend! With the temperatures soaring to the high 90’s, my friends and I decided to beat the heat by going to a water park. The water park in question? Raging Waters in San Dimas, a convenient twenty minute drive from campus.

Here’s the entrance to the park. As you can probably tell it was packed that day! I guess everyone else had the same idea as us. Funny thing as I was taking this picture. So apparently the guy on the left thought I was taking a picture of him (for whatever reason…) and decided to throw up the obligatory Asian peace-sign. I did feel bad for him as he looked rather sheepish when his friends laughed at his misunderstanding.

Here is me and my friends stopping for lunch (attempting to make a heart if you couldn’t tell). Although the lines were super long and slow moving we were able to ride at least a few before hunger ebbed in. Even though we had only been out for a couple of hours and had slathered on the sun screen before hitting the rides, I could feel myself becoming tanner already!! That and some of my friends already had the beginnings of what would become very painful sunburns.. ouch!

To save time (and money) we decided to split a large pizza between the eight of us… But what should have taken only a couple minutes to make, took more than 30 minutes. Note to self, never visit a water park on the hottest Saturday of the month. But, on the bright side, since it was a Saturday, the park stayed open later than usual so we were able to ride all of the rides we wanted to (excluding the one slide that was a vertical seven-story drop… the screams that came from there were frightening!).

After driving back to Caltech and changing, my friends and I decided to eat dinner at a nearby cafe in Arcadia (only a five to ten minute drive from campus). Perfect for the starving college student, this cafe, called Au 79 (literally after the element gold and it’s atomic number), stays open until after midnight and serves all kinds of Asian food and boba drinks.

What’s boba you might ask? In other states it’s also called bubble tea or pearl drinks. Basically, it’s any kind of drink you want, with flavors ranging from the traditional milk tea to watermelon juice to anything from passion fruit green tea to taro milk, with small, slightly sweetened, balls of tapioca – the boba or pearls.

Since there was some kind of a jazz performance at the cafe, it was packed. As a result, we were forced to sit outside. On tiny chair and a pull out table. In front of a dvd-rental shop. Despite how bored some of them may look, we had a fun time just talking and waiting for the food and drinks.

Shaved ice! So it may be a little difficult to tell from the picture, but this shaved ice was huge. Approximately the size of two of our dishes. Covered with fresh strawberries, condensed milk, and sugar syrup, it took all eight of us (which included four very hungry guys), a couple of brain freezes, and a fight for who eats the last strawberry (in the sense that no one wanted to eat it) to finish it off.

It was certainly an enjoyable weekend but it’s back to working in the lab. More protein purifications to come… Til next time!!