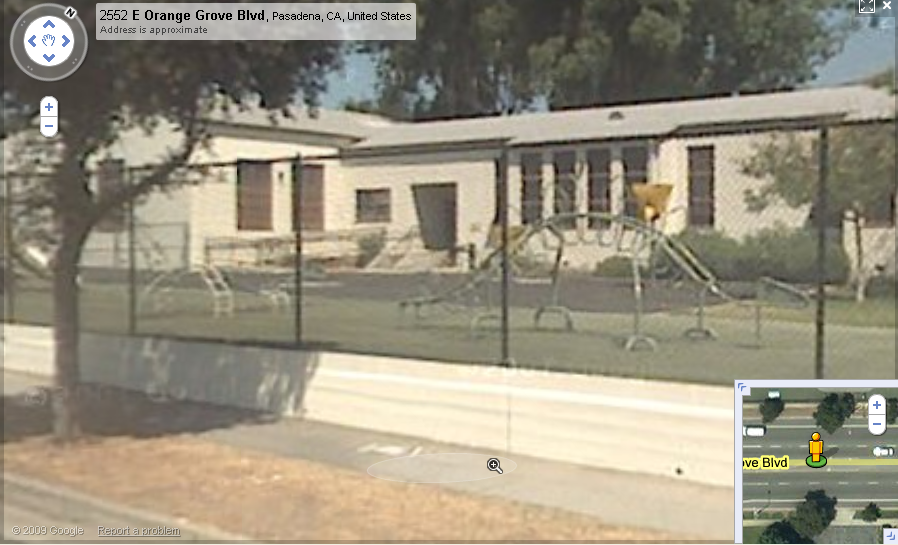 Getting Cables or A Tour of Pasadena

The other day, I wanted some cables. What I needed were two 1/4” Stereo Male to RCA Female adapters, so I could hook up an X-box to the house speaker system.

First, I tried several shops along Lake Avenue, but none of them knew what I was talking about. I tried Target, but they’ve switched to all HD stuff. Paseo (which is like a mall) didn’t have anything for me either, but I got directions from their information desk to the nearest Radio Shack (turns out it wasn’t the nearest at all. Oh well.). She said it wasn’t walking distance, but I didn’t pay much attention to that. After all, it was a nice afternoon and I didn’t need to be anywhere. So, I fueled up on Jamba Juice and headed out.

She told me to go north to Orange Grove, then go east for “a while.” It turns out that “a while” is a really, really long way. Oh well. I got to see a part of Pasadena I hadn’t seen before.

The area directly north of Caltech is a little rough. The houses are a little run-down and some of the shops are empty. That’s probably why Caltech has expanded northwards and not southwards since moving to Pasadena; million-dollar mansions to the south vs. small homes to the north. Once I started heading west, though, the houses started getting bigger and the lawns started getting greener.

I must have passed fifteen churches on my trip. They ranged from the enormous Anglican church across from the city hall to a very plain Friends Meeting in Orange Grove. I’ve heard people claim that Pasadena has more churches per capita than anywhere else in the U.S. It certainly seems likely after all the churches I saw! I passed a couple parks, too. Pasadena parks are very nice. They all have free restrooms and water fountains (very convenient on a long walk). They usually have nice play equipment, too.

I passed a school with the best playground equipment I’ve ever seen! Everything was shaped like a dinosaur. There was a Brontosaurus with four slides for legs, a Stegosaurusjungle gym, etc. If there hadn’t been a fence in the way, I would have stopped and played on it! Eventually, I got a little lost. I had been walking along Orange Grove, but eventually it turned into a different street. Luckily, right there on the corner was a Pasadena Public library! I was a little nervous, because I’d forgotten my library card, but I asked them for directions anyway. They were very helpful. They told me to keep going until I saw a bowling alley, then a Bank of America, then an Islands. Sure enough, the Radio Shack was right where they said it would be. They got me the adapters I needed and I headed back. It was a much shorter return trip, since I knew that I could head right back to Caltech.

All in all, it was a 12 mile trip. I could have chosen a much faster route, and I certainly could have gone to a closer store, but it was an adventure!