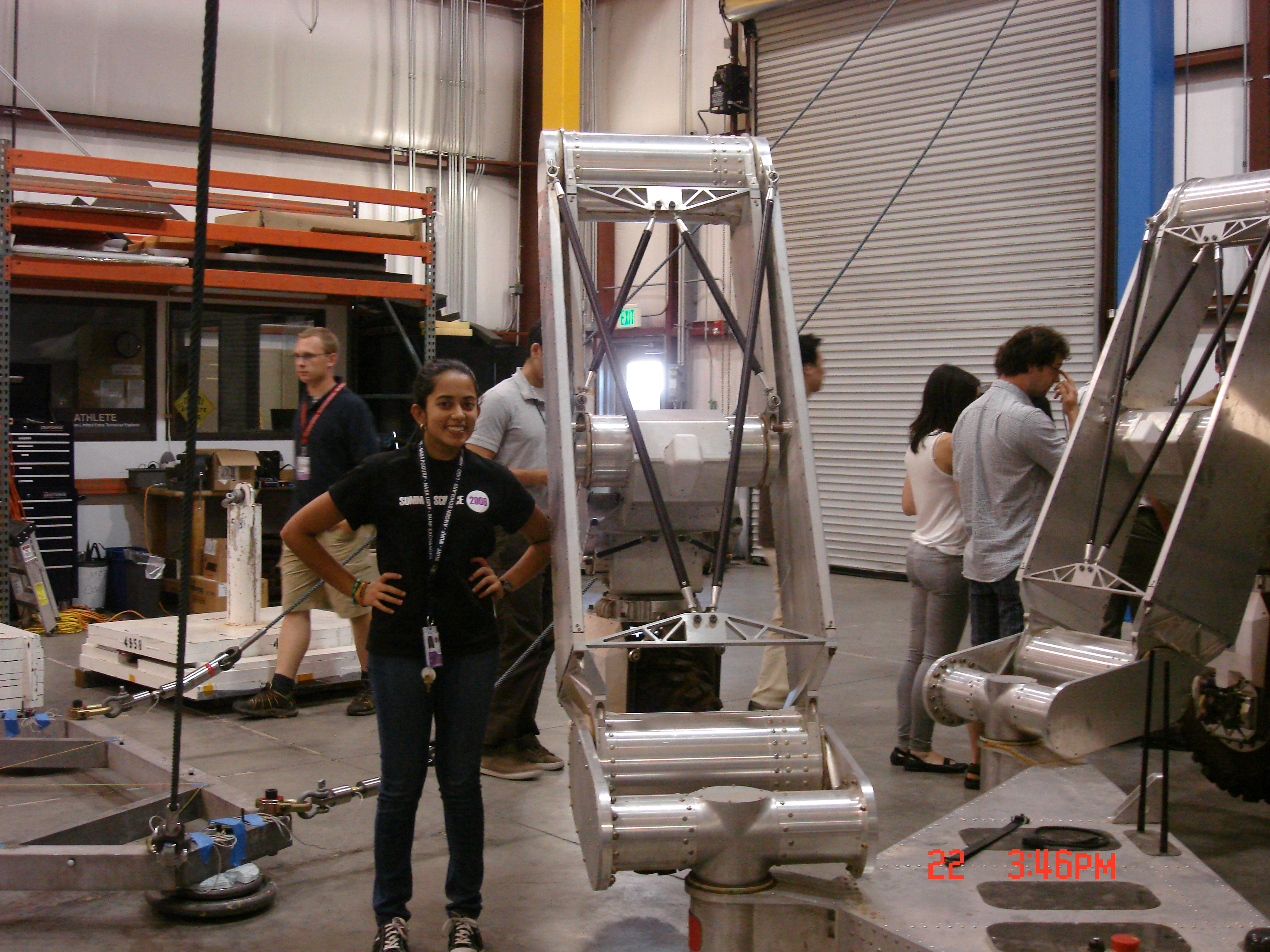 As I mentioned briefly at the end of my last post, I got to tour the Lunar Surface Operation Testbed (LSOT), which is the facility that JPL uses to simulate low gravity and test the large ATHLETE Rover.

Now, when I say large, I mean HUGE! The prototype being tested is a whopping four meters tall when the rover’s legs are fully extended. Four meters?! And that’s just the prototype. The actual rover, which was going to the Moon, but might now go to Mars or a Near-Earth Asteroid, will be nearly double that height: 8 meters! :D Yes, I am in awe of this humongous beast. :) I’m 5’2” (1.6 meters), so you can see the size difference is evident, even when the rover’s leg is folded up. xD (The JPLers working on it let us take pictures)

^ The cables you see behind me are what JPL uses to suspend the rover to simulate low gravity.

^ Another view of ATHLETE’s folded leg

ATHLETE isn’t the only giant roving around. At the beginning of the summer, we got to see theMars Science Laboratory(MSL – also known as “Curiosity”) being packed to be shipped to Cape Canaveral (in FL) for its launch in November. During our orientation talks, we were encouraged to go see it before it was shipped off the next week. I really wanted to see it, so I rushed over there after lunch the first day! xD We didn’t actually get to go inside the clean room, but we did get to watch up close as the JPLers in their pristine,white bunny suitswrapped the large rover in a golden saran wrap-type material. There was also one suited person walking around with a large video camera, filming the JPLers as they worked. I always wondered who took those videos! I watched them religiously off of NASA’s website when I was in high school. Now I don’t need the videos! I can see everything up-close. :) MSL, though smaller than ATHLETE, is still the size of a large car, an SUV perhaps. You can see the difference in size between this new Mars rover and the previous ones:

And here is the wheel that JPL plans on using for ATHLETE:

If you read my last post - in other words if you haven’t, read it! :) - you probably know what I’m going to say next. These experiences (standing next to ATHLETE’s giant legs, seeing new pieces of technology and where prototypes are tested, and watching a soon-to-be launched rover be packed for shipment) all gave me the “closer” feeling. It’s surreal to know that I get to work at the place where all these missions really start! _ <– “star”struck face. Get it? Stars in space that leave me in awe and the asterisks are star-like too! haha Until next time! :)