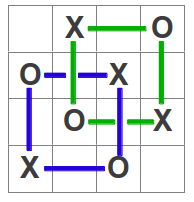 For the next part of my SURF project, I’m starting to read about grid diagrams for knots/links. A grid diagram is a way to draw a picture of a knot or link. You start with a square n by n grid, and then place O’s and X’s (at most one symbol per box) in the grid. The grid must have exactly one O and one X in every row and column. After this, we get to connect all the symbols! It reminds me of tic-tac-toe and connect the dots (actually, part of the programming portion of this SURF project reminded me of connect the dots as well). We draw vertical lines from an O to an X in each column, and then draw horizontal lines from an O to an X in each row, letting the horizontal lines go underneath the vertical lines. At the end, we have a picture of a link, like in the following picture, where n = 4. (There’s also a convention to orient the link.)

Grid diagram - one link component is blue; the other is green Every knot/link can be drawn as a grid diagram by making only straight horizontal or vertical lines and then rotating crossings so the vertical strand is on top. Although grid diagrams have been studied for some time, people recently (like in the past decade) have taken a new interest in them because they can be used for knot Floer homology. It turns out that grid diagrams for links can be interpreted as what is called a "multipointed Heegaard diagram". A Heegaard splitting is a specific a way to cut up a 3-manifold (think of something in 3 dimensions) into two parts called handlebodies. A Heegaard diagram is a picture that describes how to glue the handlebodies back together to make the original 3-manifold. It's also really hard to visualize this since 3-manifolds can live in 4-dimensional space (like how a spherical shell, which is a 2-manifold, lives in 3-dimensional space). My mentor gave the other SURF student and me a research paper from 2006 titled "A combinatorial desciprtion of knot Floer homology" to read. It starts out with grid diagrams for links, but then quickly moves on to much more modern math. Much of my time is spent Google searching topics the paper mentions or trying to find the topics in various topology books at the library. Unfortunately, sometimes there's no Wikipedia page for the topic, and the first few hits on Google are all research papers that already assume knowledge of the topic. Then I know that one (or more) of the following is true: (a) this topic is extremely recent, i.e. "cutting-edge" mathematics research (yes, such a thing exists) (b) this topic is very obscure, and not many people actively study it (c) I need to email my mentor and ask about it I'm not working on a pure math SURF (this project involves programming), but from what I've heard, pure math SURFs often involve reading research papers, and it can sometimes take several weeks (or longer) to get though a single one. Although difficult, it can be very rewarding - this is new, cutting-edge mathematics! These ideas and results haven't been around for very long. Heegaard Floer homology, for example, has only been around for approximately a decade, and mathematicians are still actively studying it and discovering new results!