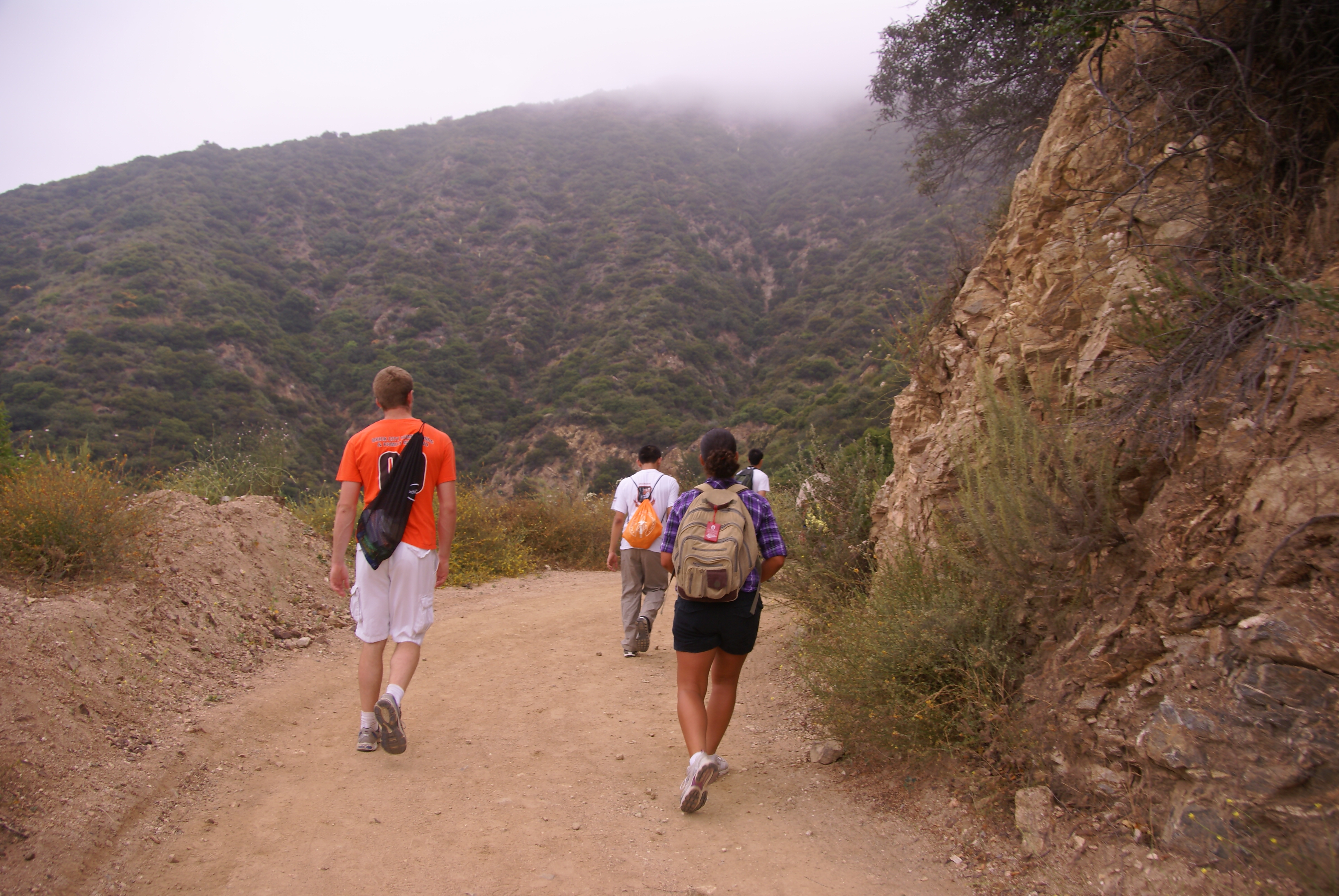 I always thought New Hampshire, my home state, was really cool for having mountains, beaches, and Canada within day-trip distance. There’s only one problem: CA does too. In fact, I’m pretty sure the mountains and ocean are closer to each othere here than in NH. I made it a weekend trip: on Saturday, I hiked Mount Wilson with a bunch of other Techers and summer students (here for SURF or Caltech’s JPL programs) and on Sunday, my roommate and I took the metro to Santa Monica.

The hike began at Eaton Canyon, headed up to the Henniger Flats for three miles, and then continued on for six miles to the peak. The trial is an old dirt road, but it definitely isn’t all too car-safe anymore – at some point over Henniger Flats [I think there are some people who drive up to there – it is a campground], there were a bunch of boulders covering the road. My favorite part of the hike was right after the Henniger Flats – we were actually walking through a forest!! Like lots of trees! There were tons of wildflowers, including, I think, some forget-me-nots, those little pink frily ones [I’m sorry, this probably describes a plethora of flowers, but try to think mountain :)], and tons of yellow ones.

At some point past the rockslide, it got really buggy. Like swarms of bugs around you. And these were the nasty kind that bite and leave marks the size of bee-stings. Not fun. We met some locals who had been turned around by the bugs, and that began a train of ideas in our group. In the end, only a few people who would be able to come back in August decided to escape the bugs and hike to a lower waterfall instead; the rest of us continued. It was really buggy though, so another hiker and I got way ahead of the group. Mysteriously, we didn’t find them on our way down either – there was one intersection where two paths led to the top, and this is probably where we lost them :( It was still awesome though, because I had to be back on campus at 5:30.

I’ve written about the Caltech Y a bunch, but in short, the Y does everything from outdoors to community service to exploring the area. On the third Saturday of each month, we take a group of Techers to Union Station, a homeless shelter in Pasadena, to cook for the residents. That’s why I had to be on campus by 5:30 :) This month, we made mashed potatoes with string beans, lemon-marinated chicken and gravy. We had ice cream for dessert. It was soooo good and all the residents kept telling us [I’ve been there before, and they’ll thank you every time, but they won’t tell you the food is great if it isn’t]. I attribute it to the cooking skills of this group: one of the grad students on the trip made those beans into something amazing, and a postdoc had a really good mashed potato recipie. We also had a lot of ideas for future meals; we were thinking about lasagne, Indian food (American-style mild :)) and a Mexican Night. The trips are always really fun - after cooking for a few hours, we eat with the residents. Many of them have a pretty interesting (by that, I mean not very represented / noticeable at Caltech :)) outlook on their situation. We’re looking into working with them not just by cooking but also in helping them return to supporting themselves. For those of you coming to Caltech this fall, I really suggust looking at what the Y does and finding something you’re interested in! Or finding something at the clubfair – there really are a ton of awesome groups on Caltech, and many of them are a great complement to the classes / offer a good chance to follow your non-academic interests :)

On Sunday, Garms and I took the metro to Santa Monica.

We had fun looking at the waves under the pier: they break really cool-y (I don’t think that’s a real word :)) when they hit all the different posts. They also start going different speeds depending on whether they are under the concrete, doubled-up posts (holding up the rollar coaster) or under the wood (holding up people). The ocean is so awesome! Too bad that there was a plastic bag = pollution swimming in it :( We need to take better care of our land!

It was a pretty awesome weekend, and on Monday, I’ll get to spend the entire day playing with colors again! [Inorganic chemistry changes from red to orange or purple or blue very fast :)].